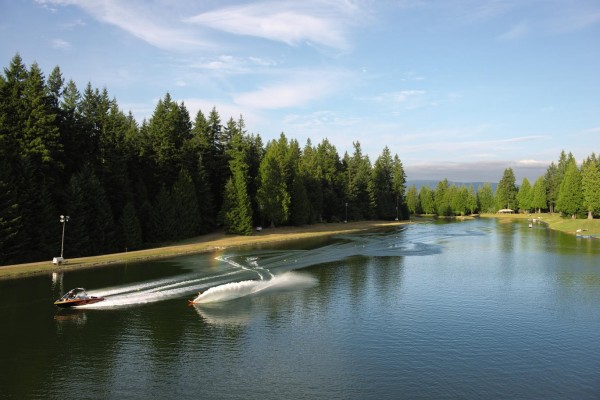 Usually when you have a helicopter following you, it’s a bad sign. But not in this case, when you’re rippin’ turns at Radar Lake in Woodinville, Washington, and WATERSKI photographer Bill Doster is pointing his lens at you from above.

The fun actually began when I flew into Seattle in early August and was picked up at the airport by my best friend, Chris Sullivan (Sully). He’s brand manager of Radar Skis, and he was hosting a team tournament in tandem with Dealer Days. And the unique format that Sully came up with is completely its own animal. (More about that later.) We got to enjoy some high-level photography, camping and just hanging out with the team. It was also really nice just to catch up with Sully. He and I have a long history together, dating back to our days skiing for the University of Central Florida in the mid ’90s, and when he later teamed up with Herb O’Brien at Radar Skis, they allowed me to be an integral part of the ski development. It’s hard to believe it’s been six years since then. 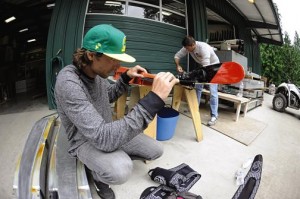 Pulling into Radar Lake will make any skier feel like a kid in a candy store. It was the second man-made ski lake in the world when O’Brien constructed the oasis in 1972, and it still amazes me every time I visit. With pristine views of the Cascade -Mountain range and breathtaking old-growth trees surrounding the property, the place makes you feel like you might see a troll, gnome or sasquatch at any moment. Drive around to the northeast side of the lake, and you’ll discover a large green barn. This is where the magic happens. Three high-end Radar models are manufactured in the barn, and you can literally walk 50 yards up the hill to the lake and strap on a freshly made ski.

On this visit, Sully and I were greeted at the barn by Eddie Roberts, Radar’s product manager, who was flex-testing several 2013 Stradas that were about to be shipped to nationals. The CNC machines were running nonstop, and all of the finishing touches were being made so everything would be ready for the Surf and Water Ski Expo in September. With a new ski in hand, Sully and I made the short hike uphill to the lake for a set.As many buoys as they can? That means the skier can miss or fall and still continue. Obviously, the faster you get to your toughest pass, the more chances you get to increase your score. I loved the challenge, and so did the rest of the team.

When Doster arrived a few hours later for the shoot, the stoke factor continued to rise. He was pumped like we were to be at Radar, so we prepared for the night’s event. We started by moving construction lights into place while Doster rigged the boat and high-reach with remote strobes. It took us a few hours of trial and error to get the lights positioned correctly, but we were ready to roll. Now, let me tell you what makes our tournament unique. How about each skier gets six and a half minutes to run.

Some highlights from our two-night event: 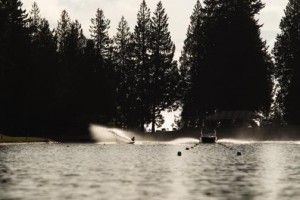 Brooks Wilson went straight up the rope from 32 to 41 off, but spent very little time in between his rope shortenings. On his first 41 pass, he rounded three buoys. And get this — he continued down the lake and, instead of stopping, he told the driver to spin the boat, and he got right back into the course. Boom — he ran 3 again. With little time left, he managed another poke at 41, rounding 2. The crowd went crazy. They loved it!

Although he’s not a Radar team skier, Marcus Brown was invited to hang with our crew and compete as well. Skiing with M. B. is always fun. He took the traditional line-shortening route and rounded 6 ball at 39½ off in one of the rounds, but couldn’t get out of the gates with the handle.

Whitney McClintock’s virgin ride at Radar Lake. Time: 10 p.m. She worked her way up the line from 32 off, and ended up running 4 at 41. Wow!

On the comp’s first night, Aaron Larkin electrified the crowd with a classic Larkin power run, where he finished off the 41 pass and bagged one at 43 off. The second night of the event wasn’t as kind to him. After skipping 35 off and running 38 and 39, he had a huge stack on his way to 3 ball at 41. On the next attempt, he rounded four buoys. With little time left on the clock, he got back in the course at 41 with a repeat crash of his first evening’s yard sale.

I had my fun too! In both rounds of the comp, I skipped 35 off to have more shots at 41. It’s not easy to follow a show like Larkin’s first round, but I did hammer my way down 41 to get to 5 ball on the first night. The tourney’s second night was better for me. After an aggressive start and a great line into 2 at 41, I was set up to run the pass. I had a scare with a bobble at 4, but threw a huge turn at 5 and ran the pass.

Of course, Paige Rini wowed us before the trip was over — she’s 12 years old and running into 35 off. She can thank our final team member — Matt Rini, her father and coach — for that.

I can’t leave the unsung heroes off the list. The photographers just outdid themselves. Watching Bill Doster shooting strobes out there to light up shots was the best. 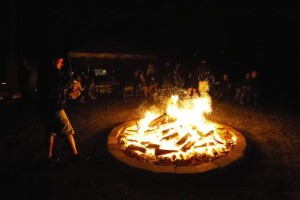 But I don’t want you to think that all of the good times were on the water. Everyone was camping at the lake, so late nights surrounding a bonfire, enjoying cocktails and watching the shenanigans unfold were the norm. Another highlight for the team was our four-wheeling adventures through the vast trail system at Radar Lake. It’s really fun to hang with so many great people who have a passion for skiing and wakeboarding. After these long days full of action, you sleep like a rock, until you wake up, ready to hit the reset button and do it all over again!

Not a bad way to spend a few days during the peak of a Northwest summer, right?