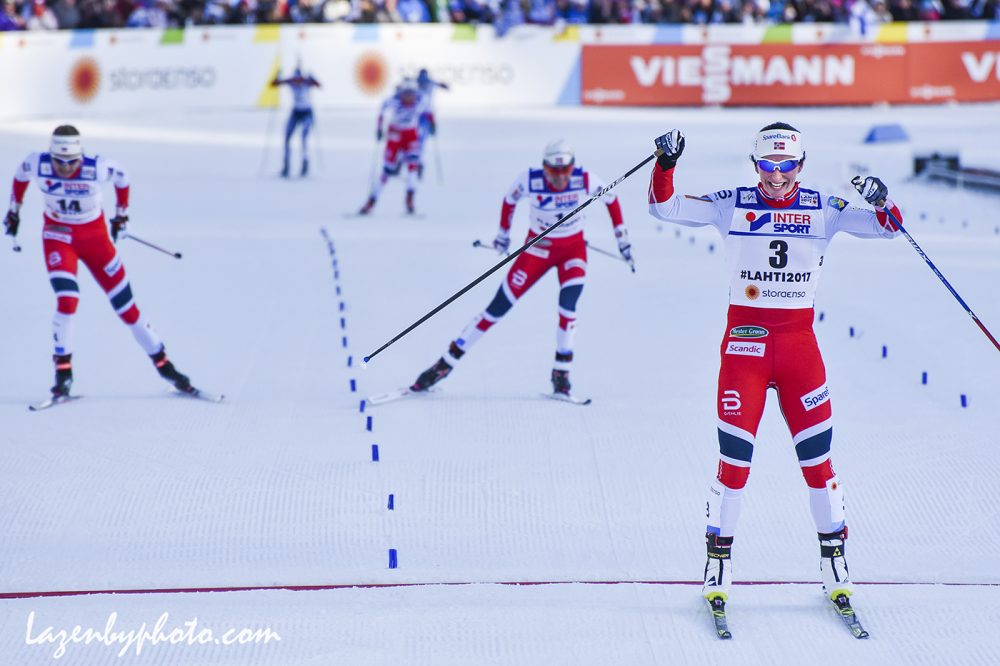 Bjørgen has two previous 30-kilometer championship titles, but Saturday’s was her first in freestyle. She won the race in 1:08:36.8 hours, just 1.9 seconds ahead of a hard-charging, photo-finishing Weng for second and Jacobsen for third. Haga finished fourth, 5.5 seconds off the podium and 7.4 seconds after Bjørgen. 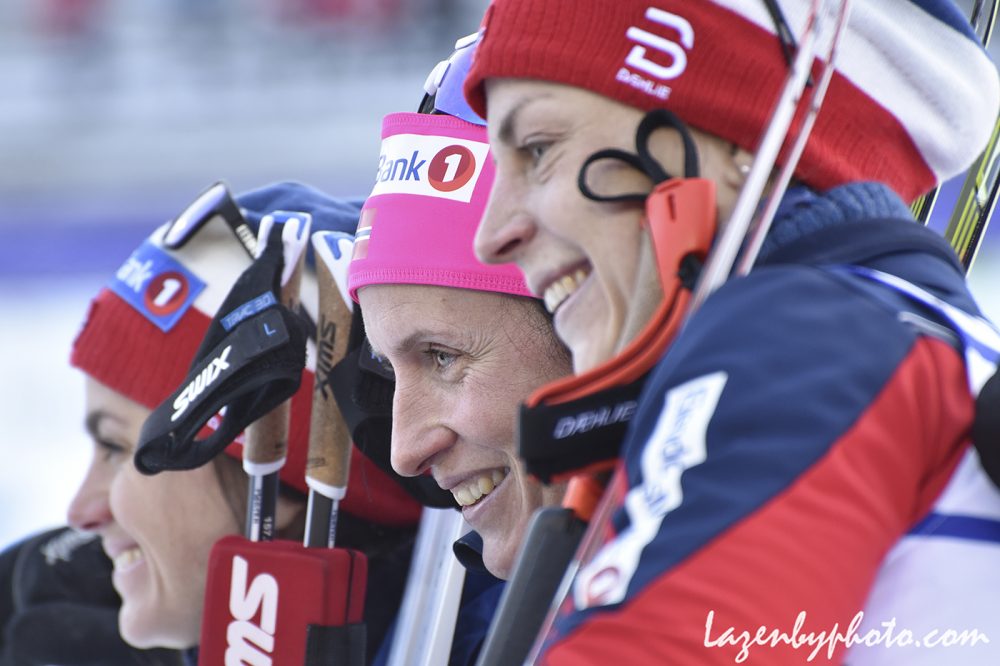 Weng explained that though she was aware Bjørgen’s move might come on the climbs and Jacobsen’s more likely on the downhills, her strategy was to stick with the two as long as she could.

“I knew that, for example, Marit is strong on the uphills, and Jacobsen is good to go down,” Weng said during a post-race press conference. “But … I just go and see what happens.”

While Jacobsen has podiumed in a World Cup 30 k once before — two years ago in Oslo, Norway — Saturday’s 30 k top-three finish was her first at world champs. Almost immediately out of the start, Jacobsen was on the ground and ceded approximately twenty seconds to the sharp end of the pack. After hitting the ground hard, she righted herself and hammered; by two kilometers she was 10.8 seconds off of the front and catching their draft by five kilometers.

“It was a painful 30k for me,” Jacobsen said. “It was hard to get back, but I think my shape is crazy, so I managed to maneuver through everyone, even though there was a lot of stress in the pack to get back to the front. I feel lucky to be here today.”

It was Jacobsen’s third medal at these championships — she took bronze in the 10 k classic and gold in the 4 x 5 k team relay.

For certain, Bjørgen was the racer to mark. Along with the relay, she had already taken gold in both distance races (the 15 k skiathlon and 10 k classic) over the last week.

But, due to what was described as icy and fast snow and many racers coming into the 30 k with self-proclaimed, top-end fitness, Bjørgen was unable to stamp her trademark move in this race. In other words, a group of nine skiers remained cohesive until the final headwall of a climb.

“I just concentrate and I always want to stay in the front for no problems, it could happen,” Bjørgen said. “It was different. There was high speed in the snow so it was not that difficult to go out front and hard. I just understand after 10 [k] that we needed to do something at the end of the race.” 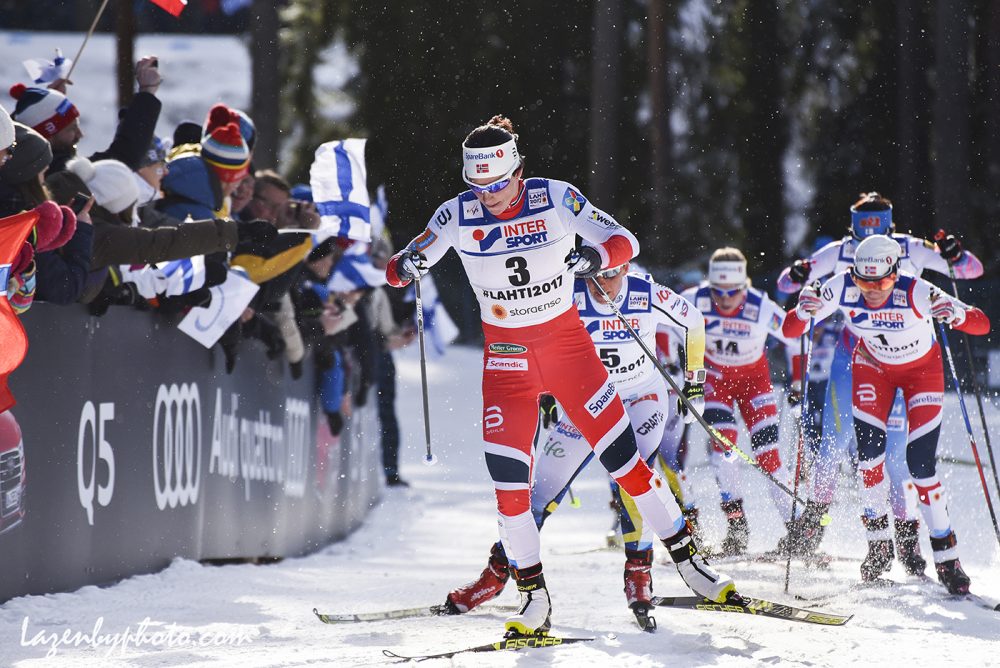 On this day, like the boss she is, she kept her cool. All this despite breaking a pole and her inability to shake the pack.

“I did. [it was] the first time I have done it in a race,” Bjørgen said, referring to her snapped pole. “I think the point that was broken was good it was just down in the stadium, so there were people standing around asking who need poles.”

Bjørgen may have difficulty returning to Norway for next week’s World Cup races in Drammen and Oslo as she’ll need to pass through Helsinki, Finland’s airport security with four golds in her carry on.

“That has to be the most amazing World Championship for me I was since I was coming,” the 36-year-old Bjørgen said. “I had this for a goal for me for fighting for four medals but being able to go home with four golds is incredible.”

The buzz in the media center after the race spoke less about Norway’s dominances and more about some stand-up North American performances. A Swedish colleague listening to the race on a live radio broadcast from Sweden, said many asked about one name in particular: Chelsea Holmes. 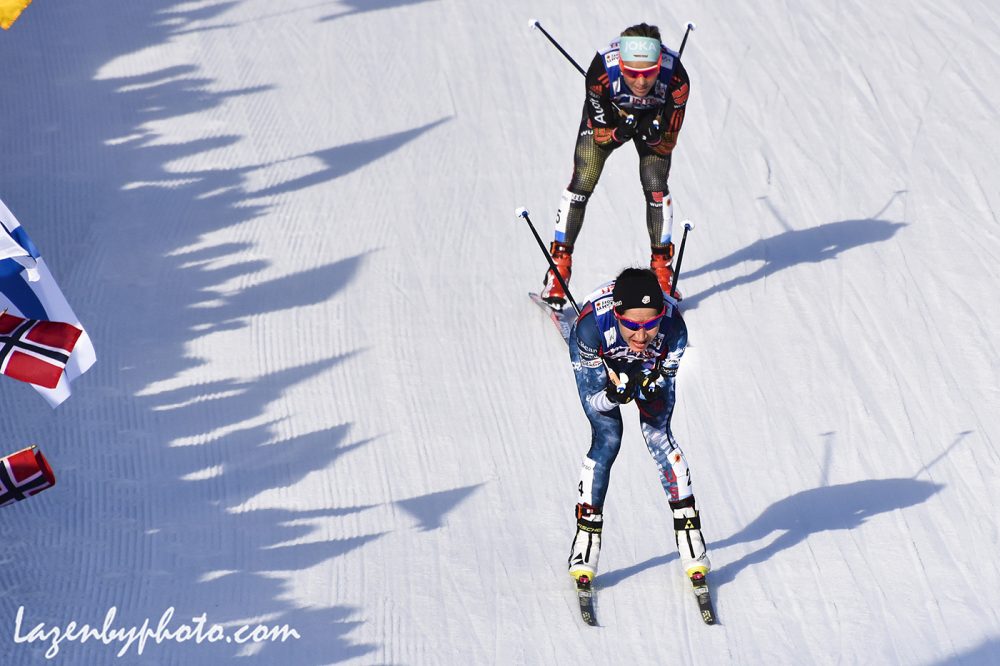 Holmes, an American skiing out of Alaska Pacific University (APU), finished 7.2 seconds outside of the top 10 in 13th (+1:28.1). Saturday’s competition was Holmes’s first World Championships race experience. The 30-year-old Alaska native made her European World Cup debut last season after having raced in the Canadian World Cup races in 2012 in Quebec City, Quebec.

With a deep field of women to choose from, Holmes’s opportunity was almost bypassed. As U.S. Ski Team Head Coach Chris Grover explained, Holmes was the third American alternate for Saturday’s 30 k.

“We approached Sadie [Bjornsen], who of course has been on a World Cup podium in skate this year in 5 k, quite a different event, but we approached her, she really did not want to race today,” Grover said, adding that she wanted to prepare for the upcoming World Cup classic races in Norway.

“We talked to Kikkan about that start, but then Kikkan has already raced four times during this championships so she felt like this was a little too much for her,” Grover continued. “Then Chelsea was next.” 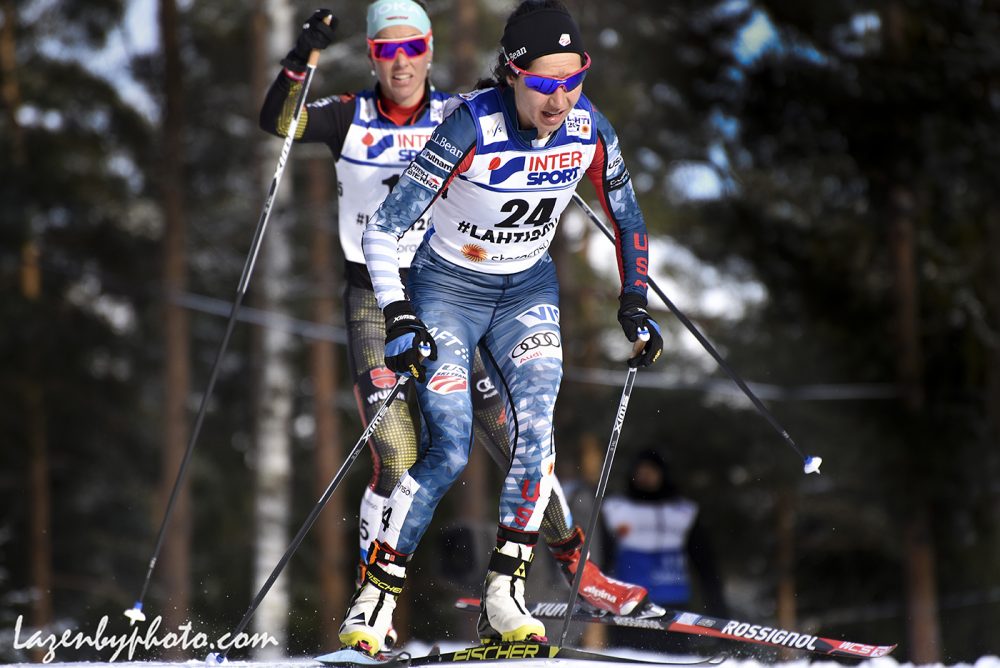 For Holmes, the race couldn’t have played out better. She skied in a pack with Russia’s Yulia Tchekaleva, Switzerland’s Natalie von Siebenthal and Germany’s Stefanie Böhler. Sometimes at the head of the group, sometimes in the draft, Holmes never relinquished contact with a potential 10th place until the final kilometer.

“I was mostly surprised that they were still there,” Holmes said of her ability to stick within the chase pack of four.

“There were a couple of times where you take feeds, or accordion on the hills, and I’m like, ‘Oh my god, I’m going to fall off!’ and then I’d feel strong, and somehow bridge that gap,” she added. “I was a little surprised in the last 10 k there was a gap, and I had a couple of hills where I got bogged down, and I was like, ‘Am I going to go backwards?’ and then it came around. In the end, I didn’t have that little pop, to to ski to 10th instead of 13th.”

Finishing ahead of Holmes as the first American across the line was Jessie Diggins in fifth (+10.4). At this point, Diggins’s result, beyond the fact that it comes in a mega-distance, surprised no one.

“She has got a fifth, fourth, third, and second from this championships, so she has really arrived in the sport,” Grover said. “She has obviously been trending that way for a while, but she really stepped up across the board, so, super exciting.”

Diggins’s fifth place was the best American result in a World Championship 30 k. She was in the hunt for a podium with nine other skiers deep into the race. When Bjørgen made her late in the game kill-shot, the nine skiers were moving up the final climb. This is where Sweden’s Charlotte Kalla, another winning threat on Saturday, stepped on her own pole putting her out of podium contention. 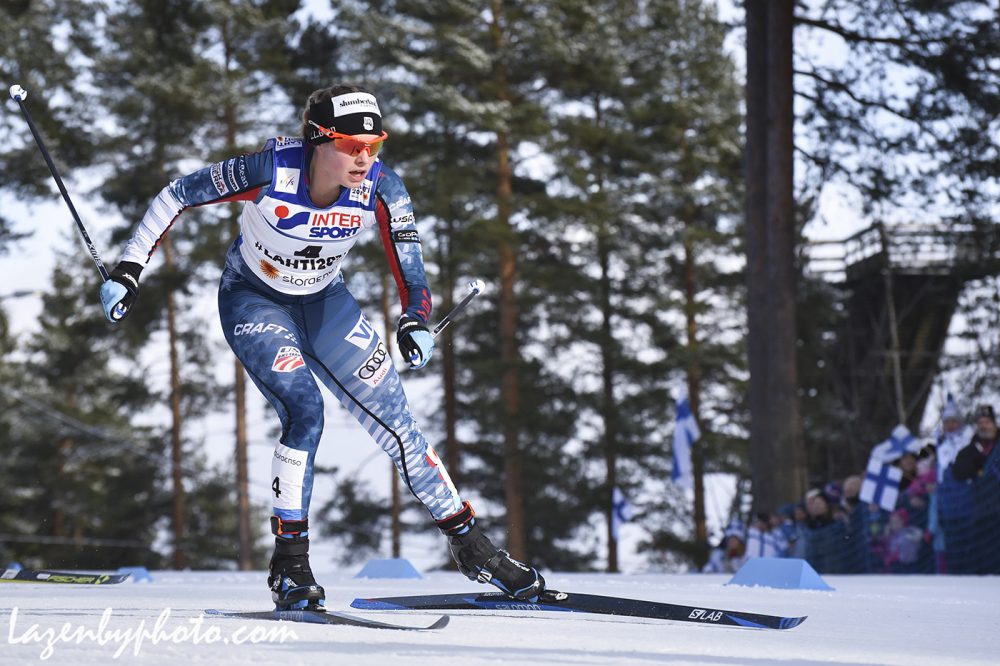 With that, four Norwegians broke away and Diggins followed.

“I was actually smiling during the race and it was just really really cool, up until the last three to four minutes, to be right there with the leaders,” Diggins said. “I was like, ‘OK, this is possible,’ and thought I knew where they were going to go. Unfortunately I wasn’t positioned quite right so when the attack came, I kind of had to do some navigating.”

Diggins leaves these championships confident about her current and future place in the sport. Asked about the diversity of her strong performances in both the short and long distances, the 25-year-old Minnesotan responded that being a well-rounded skier has been the primary objective.

“I think that is the overall goal,” Diggins said. “I don’t want to be just a skater or just a sprinter or just a 5 k skater, I want to be able to be everything. I want to be an all around person who can show up and medal at any event. That’s the ultimate goal.”

She continued that some of her better results are yet to come.

“I am not even close to my peak yet … I have some years to keep working on it,” Diggins said. “I really want to be a threat in any event that I enter. Especially for the Olympic year, I mean, it is time we get a medal darn it, so we are going for it.”

At the 2015 World Championships in Falun, Sweden, Stephen finished 11th in the 30 k classic mass start. Gregg medaled earlier in those championships, finishing third in the 10 k freestyle in Falun (behind Diggins in second).

“I felt incredible for the first 5, or 10 k, and then I don’t know what happened,” Gregg said. “I don’t know if I’m just out of touch with that racing feeling, because I haven’t been racing a lot, just training.”

The last race Gregg contested was the Boulder Mountain Tour on Feb. 4, which she won.

“I found myself in this kind of nondescript place, where I felt like I wasn’t necessarily tired, but I couldn’t push any harder,” Gregg explained. “My skis felt great, everything was great, I think it was just one of those days you hope not to have on a championship day. I wish there was something that I could point to, and say, ‘this went wrong,’ but everything was dialed. I just didn’t feel that extra zoom today.” 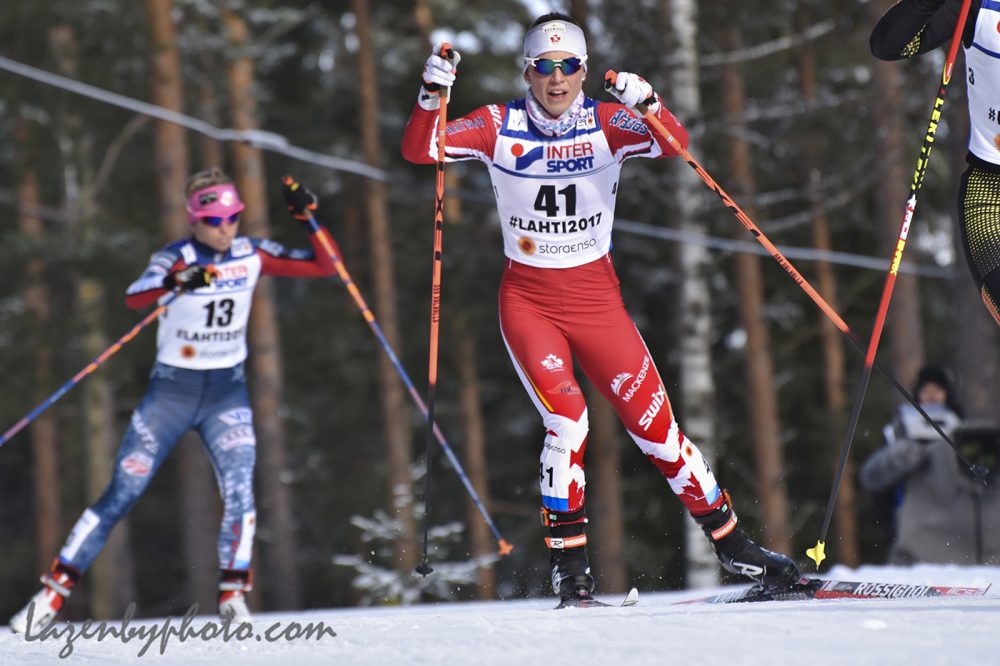 Canada’s Cendrine Browne led her team in 26th (+3:16.0) for her best individual result to date and first time scoring World Cup points (top 30). Browne skied within 17 seconds of the race leader at 11 k, when the pace started to pick up. After that Brown lost contact with the front group.

“I felt no pain for the first 10 k. I was like, ‘Wow, I am in really good shape today. I think I can do this,’ ” said Browne, a World Championships rookie and Canadian U25 Team member. “After 15 k, I lost the first pack, but I was with a pack of three or four girls so we skied together and a couple of other girls joined us towards the end. I really surprised myself today. I had the legs, I had the power, I had the shape. It was awesome.”

The second Canadian to finish was Dahria Beatty in 34th (+4:45.2). Saturday marked Beatty’s second 30 k, and her first at the World Cup level (she raced the Canadian National Championships 30 k freestyle mass start in 2015, where she placed third).

“The first 5 k were awesome,” Beatty said. “It was fast day and I stayed with a big pack for a long time… then just kind of broke off the pack about 6 k and fought hard the rest of the race and couldn’t quite make it to that top 30 pack but could kind of see them in the distance. It was a really good race to learn and looking forward to another 30 k in a few weeks.” 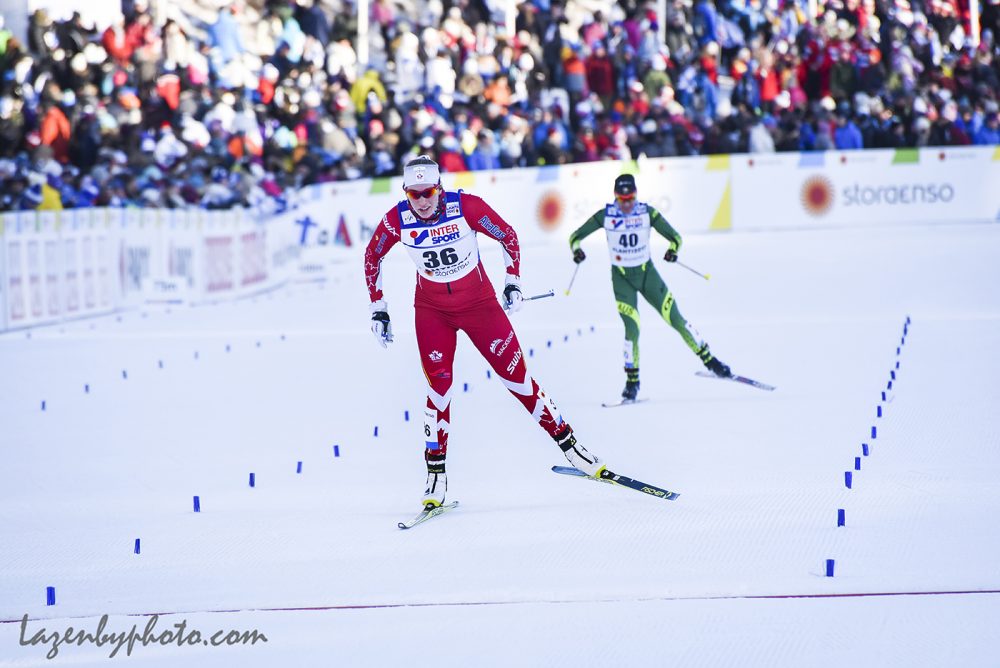