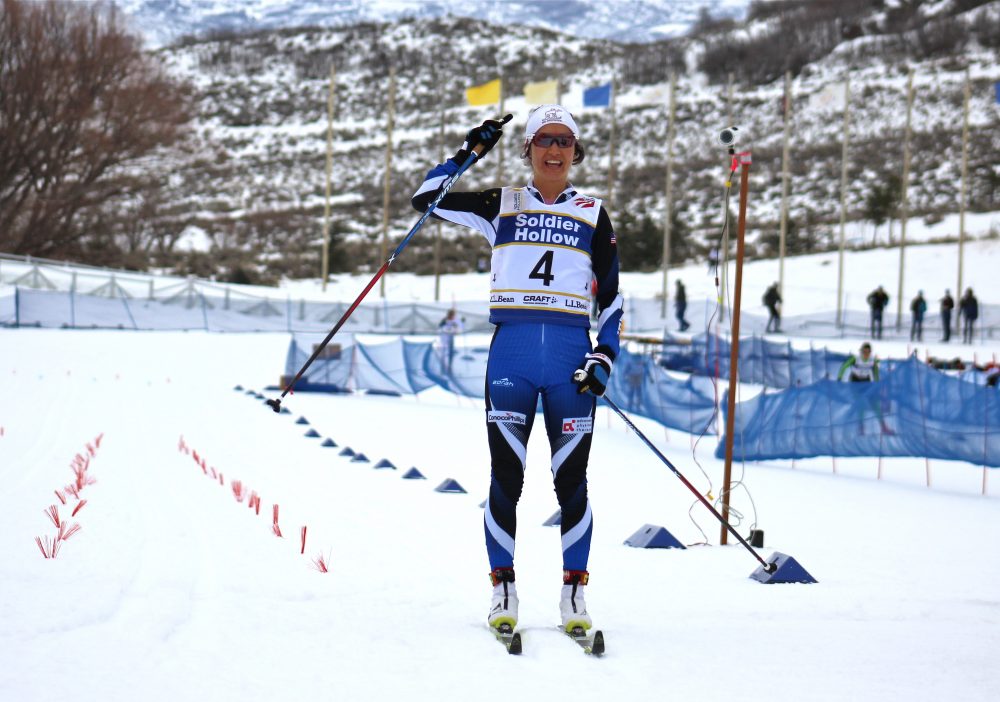 MIDWAY, Utah. — As she headed up Soldier Hollow’s infamous Hermod’s Hill for her fifth and final time, there wasn’t another skier in sight. At least none of the ones she started with.

Chelsea Holmes, of Alaska Pacific University (APU), was fine with that. She never liked sprints to the finish, and on Tuesday, Holmes would have it her way.

Of course, there was still the possibility that she would slip and skid to a stop, or slow down drastically from a serious bonk. But those were all chances Holmes was willing to take. In the 29-year-old Alaskan’s mind, ski racing is about taking risks. 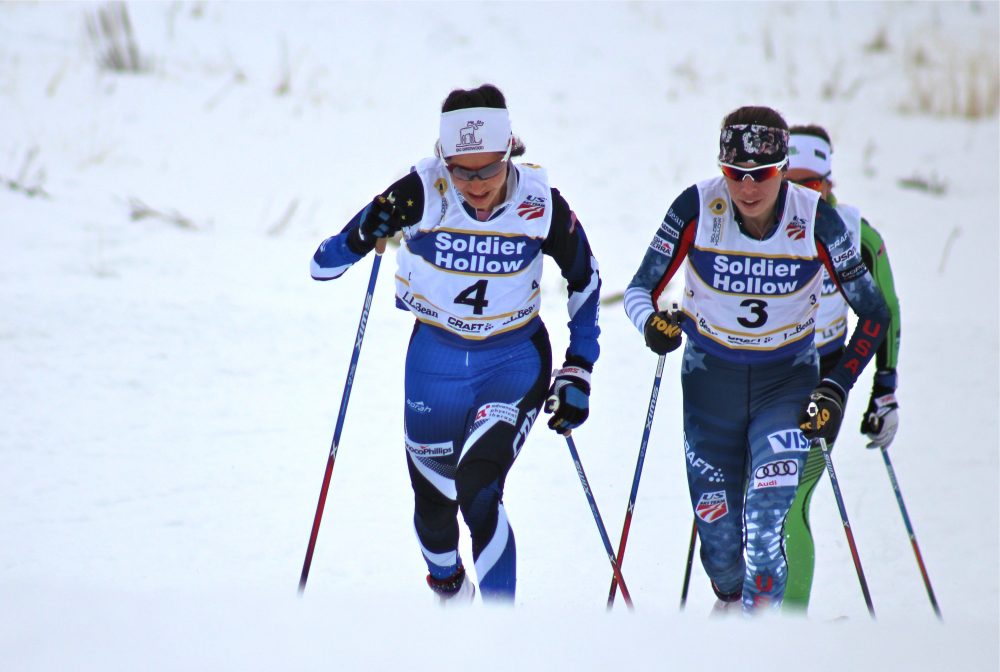 Tuesday’s 20-kilometer classic mass start was no different. Especially with it being the last distance event of the 2017 U.S. Cross Country Championships series.

“There are countless races that I’ve lead only to be passed and blown out in the last half kilometer,” Holmes said after Tuesday’s race. “But even those days, I don’t think I would do anything different other than say I should have gone harder, earlier. … I know that, more than anything, I will be disappointed if I don’t put it all out there.”

Go hard or go home it was, and within the first of five laps, Holmes was charging the front along with Katharine Ogden, of the Stratton Mountain School (SMS) and U.S. Ski Team Development Team,  Caitlin Patterson, of the Craftsbury Green Racing Project (CGRP), and Erika Flowers (SMS Elite Team).

Hunting Holmes down in a chase group was her APU teammate Becca Rorabaugh — who place second in Sunday’s classic sprint and just off the podium in fourth in Saturday’s individual start — Liz Guiney (CRGP), Canada’s Dahria Beatty, and Anne Hart (SMS Elite Team).

As the squad of women in front descended back toward the lap lane, Holmes continued to work through the stadium’s flat section. Ogden did not. The 19 year-old was relaxed, following close to Holmes’s lead until the group made their way out into lap two.

Skiing under the bridge that spanned the course’s first major climb, Ogden strode to the right of Holmes, seeking the front spot for herself. 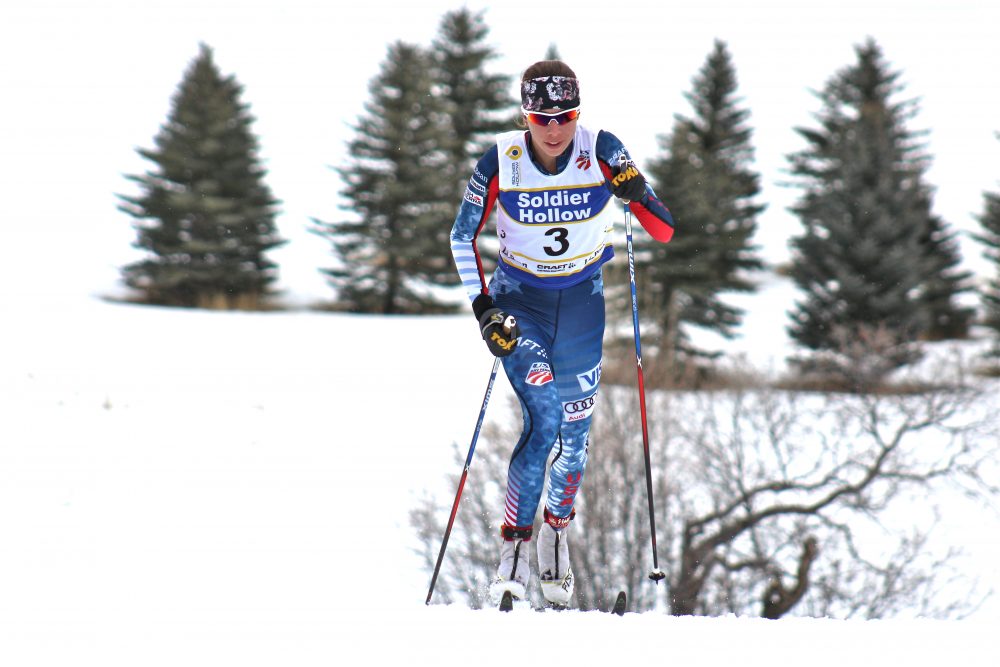 “KO is like me, she likes to push the pace,” Holmes said of Ogden. “Even though the stadium is not super-long, I could tell … I would get sucked back in. On the climbs, I felt myself breaking away.”

Though Holmes hadn’t necessarily peg-pointed a place on course to start her surge, by the end of Lap 2, she was feeling it. Climbing up the last hill before cornering back through stadium, it was only Ogden and Patterson who were able to hold onto Holmes.

“[Holmes and Ogden] have really amazing turnover on the uphills,” said Patterson, who strode roughly 10 meters behind the leaders on the hill. “It was sort of hard for me to ski relaxed and comfortable and follow them but, I was trying to follow them.”

Close to 25 seconds ticked by before the next group of women made their way up, including Rorabaugh, Hart, Flowers and APU’s Rosie Frankowski, who had maneuvered around three more skiers since the start — she started in bib 14 — and now sat in seventh.

Yet, as Patterson point out, with two laps to go, no podium or position was firmly in place. Especially at altitude, on a course that features some 700 meters of climbing, anything could happen. Patterson was predicting, or hoping, something would.

“I think your mind kind of naturally goes to like, ‘Ah, OK, here I am in third,’ ” said Patterson who had lost close to 30 second on the leaders by the end of Lap 3.

“But I was telling myself that it’s not over until it’s over,” she added. “People blow up and or get stronger again and with these big downhills and flats. You just never know what’s going to happen.”

Something did happen. Holmes hammered even harder.

Heading into her fourth lap, the Alaskan was bringing the hurt. Ogden, who had been fairly relaxed for three-fourths of the race, slowly faded from the APU suit’s sight.

“I was definitely chilling a little bit the first few laps,” Ogden explained. “Then [I] kind of died a little, actually a lot.”

Admittedly for Ogden, the race soon became about holding onto her spot rather than the finding first place position.

“I could tell that she was dropping me pretty hard,” Ogden added. “And I was just trying stay ahead of Caitlin [Patterson], to be honest.”

But Holmes hadn’t won yet. Even for a seriously adept climber, racing for the win is far from a glamour gig. It’s gritty. It’s grueling. But, according to Holmes, glamorous? Far from it.

“You hear stories about people feeling amazing, I don’t think I’ve ever felt that,” Holmes said. “If someone feels it’s easy, I don’t know I believe them.”

With one lap to go, the potential to bonk was still present. But botching the win because of that wasn’t what Holmes was worried about. For Holmes, it was whether she’d cross the line knowing she’d gone hard enough. 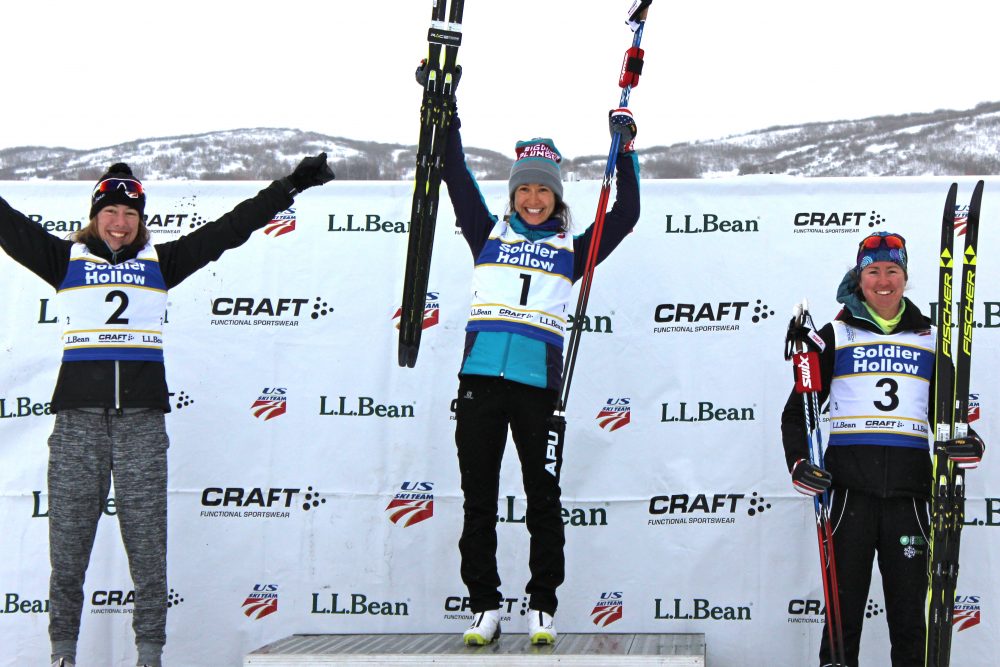 “It’s a waste to think about that,” Holmes said of worrying about going too hard, too soon.  “If I blow up, I blow up. I have to believe that I blow up less than everyone else.”

By the final 100 meters, with none of the skiers she had started with around, Holmes proved she wasted no time worrying about blowing up, crossing first for the win in time of 1:01:33.5 hours.

Taking second place, in her second 20 k ever, was Ogden, 49.2 seconds behind Holmes.

The final podium spot went to Patterson in third, (+1:10.4). Just missing the podium spot in was Frankowski in fourth (+2:13.9), while Canadian World Cup Team member Emily Nishikawa rounded out the top five in fifth overall (+2:26.6).

With the final U.S. nationals distance race done and just one race left, a freestyle sprint qualifier on Thursday, Holmes is happy to have taken the win for herself and for her APU team.

“Our techs, they work so hard…and the coaches,” Holmes said. “To do this for them, to give back to them, is amazing.”