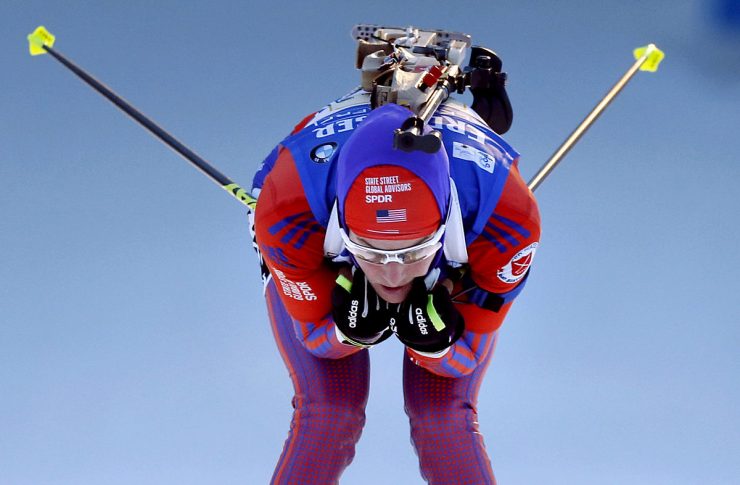 Bailey, Burke, Dunklee — even if you are a casual fan of biathlon in North America, they’re recognizable names.

Egan is relatively new to the scene. 2016/2017 marks only her second full-time season on the World Cup. That’s remarkable when you consider this: other than a session or two at summer camp, she first picked up a rifle at the age of 25. She’s now 28. Her being picked as a member of the relay team t0 start the season is a sign her teammates and coaches have faith. 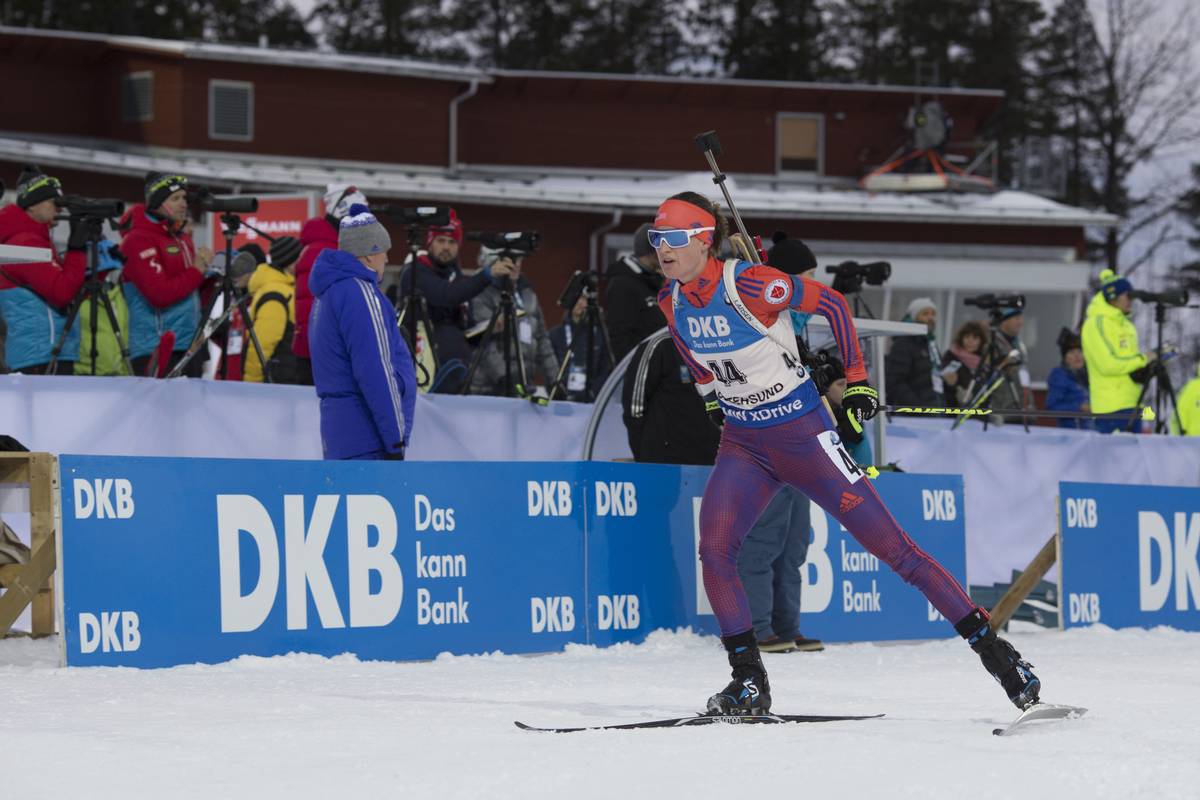 Clare Egan (US Biathlon) racing to 30th in the women’s 10 k pursuit at the IBU World Cup in Östersund, Sweden. (Photo: USBA/NordicFocus)

Still at the first World Cup stop in Östersund a week later, Egan racked up her second-best pursuit result this past Sunday, Dec. 4. She finished 30th after starting 44th (her placing in the sprint the day before).

“My wax crew did an excellent job today and definitely gave me an advantage – I was gliding past everyone on the downhills so I was able to pick up a few places just from having the fast skis…,” Egan wrote in an email to FasterSkier after Sunday’s 10 k race. “I was able to fight for top-30 on my last lap and won a sprint between 4 people in the finish. I’m proud of all my results from this week and looking forward to learning from these experiences and moving up throughout the season!”

New to the sport only a few years back, Egan had a steep learning curve. As FasterSkier podcast listeners learned, Egan attended Wellesley College in Massachusetts; a school with a club cross-country skiing program. No D-1. She graduated in 2010.

So back to that learning curve.

That equation describes in mathematical terms both the direction (positive or negative), and gradient of a line. In Egan’s case, if we were illustrating her rise in the sport with a line, let’s just say it’s positive and steep.

FasterSkier reached Egan by phone in late October while she was in Canmore, Canada, for a three-week training camp. During the conversation, Egan focused on how she could improve as a biathlete. She finished last season ranked 66th overall on the IBU World Cup.

“I continue to work on improving my shooting accuracy as well as my shooting speed,” Egan said of how she can improve in the standings. “I met my goal of shooting an average of 80 percent hits on the World Cup last year. But I hope to improve upon that this year and be shooting for 85 percent, which is a lofty goal, but I think I can do it.”

Along with improved shooting, Egan remarked that she wanted to maintain her higher-end skiing speed throughout the season. Most biathletes, unlike some cross-country skiers on the World Cup, don’t specialize in say either sprint or distance events. The race season offers more opportunities to race. That increased racing load brings with it the possiblity of fatiguing, and dulling that turbo-charged race-specific gear.

“Last year I started out real strong and then I had a fairly significant trough in the middle of the season and then came back pretty well for World Cup 8 and World Championships,” Egan said of her desire to achieve fewer peaks and valleys when it comes to results. “But I would like to see more consistent results basically over the course of the season. And I think that my experience from last year as well as my training that I have put in this year will allow me to do that — last year was the first time that I had done a full world cup season.”

From an outsider’s perspective, it appears biathlon is a sport rife with tense nerves; there’s the race-pace skiing and laser focus required for shooting. Together they seem incongruous. Like timed needle threading after a sprint up the stairs.

Yet Egan said as a developing biathlete, the nerves part of the equation remains under control most of the time. “I think actually as a brand-new biathlete you really don’t have as many nerves,” she said. “You have no pressure, no expectations, in fact your only expectation is that you will probably miss most of the targets. So there’s not so much to be nervous about.” 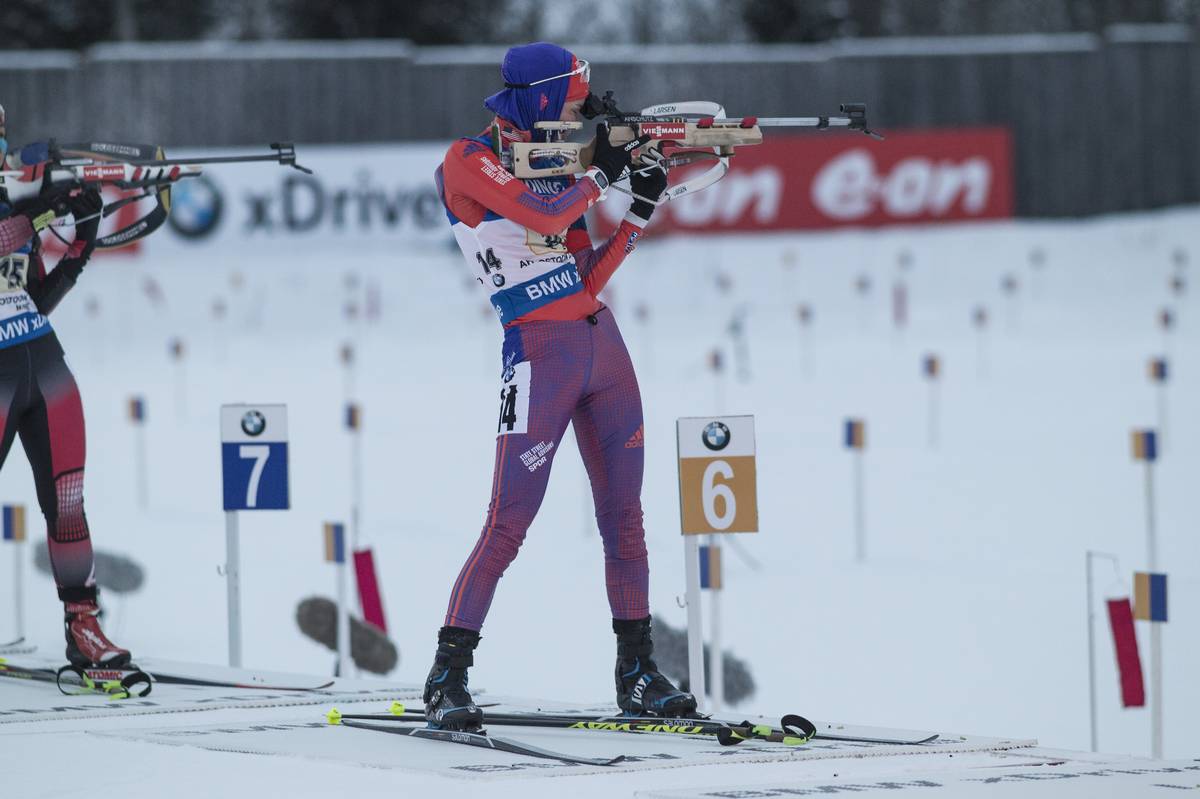 Clare Egan (US Biathlon) during her standing stage of the women’s 4 x 6 k relay at the 2015 IBU World Cup in Presque Isle, Maine. Her team went on to place 10th for a season best. (Photo: USBA/NordicFocus)

In other situations, as she matures in the sport, the nerves do occasionally manifest. “Certainly as you improve and like now I am racing internationally, I am representing my country, I am representing my team, sometimes I am on the relay with much more experienced athletes — that’s when nervousness and pressure set in at a much higher degree.”

Entering the season, Egan also ruminated on the emotional aspects of the sports. “Every biathlete has to deal with crazy up and downs, way beyond what nordic skiers experience, and that is something you definitely have to learn to deal with,” she said. “There is no way, as a cross-country skier, that you go from the top 10 to 80th — but that happens all the time in biathlon. There is no easy answer. There is no easy way to deal with that.”

The season is young. Egan’s goals remain lofty yet modest. For her, success equates to improvement. Be it shooting speed, shooting accuracy, skiing speed, or skiing technique, she’s open to improving across the board. Ranked among the top 50 biathletes in the world will be a tangible metric, she says, or her hard work.

I moved out of the Lake Placid Olympic Training Center and into an apartment with my boyfriend, Erik. This is the first time in my life as an athlete that my home has been separate from my “workplace,” and it has improved my quality of life as well as my ability to mentally and physically recover from training. I am especially enjoying cooking and eating homemade food!

Relative to last year, my training plan this year had less intensity over the first three months, which allowed me to increase the overall volume. I am also doing a more comprehensive strength program.

I’ve seen improvement in my shooting accuracy and speed, especially at low heart rate. The next step is putting that into practice at high intensity.

I am coached primarily by the national team women’s head coach, Jonne Kähkönen.  As for training partners, I’ve been getting to know Maddie Phaneuf pretty well! We are regularly joined by our national teammates Susan Dunklee and Joanne Reid, as well as a handful of up-and-coming biathletes including Emily Dreissigacker and Hallie Grossman from the Craftsbury GRP, Chloe Levins and Jennie Bender.

Best training trip was to Bend, Oregon. Anywhere with that much sun and snow is a very special place.

Best vacation was to the Turks and Caicos Islands with Erik, where we stayed at a Club Med resort and did tons of water sports and learned trapeze! And I love going home to Cape Elizabeth, Maine any chance I get — I went three times this summer.

Floating on my large inflatable pink piglet on Mirror Lake or tending to my garden vegetables and flowers.

That would have to be “Can’t Stop the Feeling” by J.T.

One day that changed the course of my life was in February of 2010 when I qualified for NCAA’s as an independent skier from Wellesley College. I never seriously considered training year-round for cross-country skiing until that moment.

Rain pants — I’ve never been more thankful for a single item of clothing. Getting soaked as you lie on the shooting mat in the prone position is not fun! And my lucky pigs.

If all goes well, I will be racing in PyeongChang, South Korea at the pre-Olympic World Cup. I have never been to Asia and would be thrilled to see a new part of the world and feast on Korean food!

Martin Fourcade and Laura Dahlmeier. Susan Dunklee in the top 10!

I live far away from most of my friends and family and my travel schedule causes me to miss more weddings and other important events than I would with a “normal” job.

I wish biathlon were more accessible to American athletes and audiences. The catch twenty-two is that Olympic medals would bring attention to our sport and inspire more athletes to try it, but without a huge pool of athletes, it is hard to achieve that level of international success. Despite the current small number of American biathletes, several are World Cup medalists who are well-prepared to medal in the 2018 Olympics, so that could spark a wave of greater publicity and involvement.

…in a completely different chapter of my life, the specifics of which are TBD, but could range from working overseas with the foreign service to nursing a babe in the ‘burbs while teaching high-school Spanish and coaching girls’ track.

If I am lucky enough to be alive as I approach 80, I hope I will look back on this sliver of my life with pride, knowing that I did my best work, that the glory outweighed the frustration, and that I lived fully in the richness of this experience.

The post US Biathlon’s Clare Egan: Calm, Cool and on the Rise appeared first on FasterSkier.com.