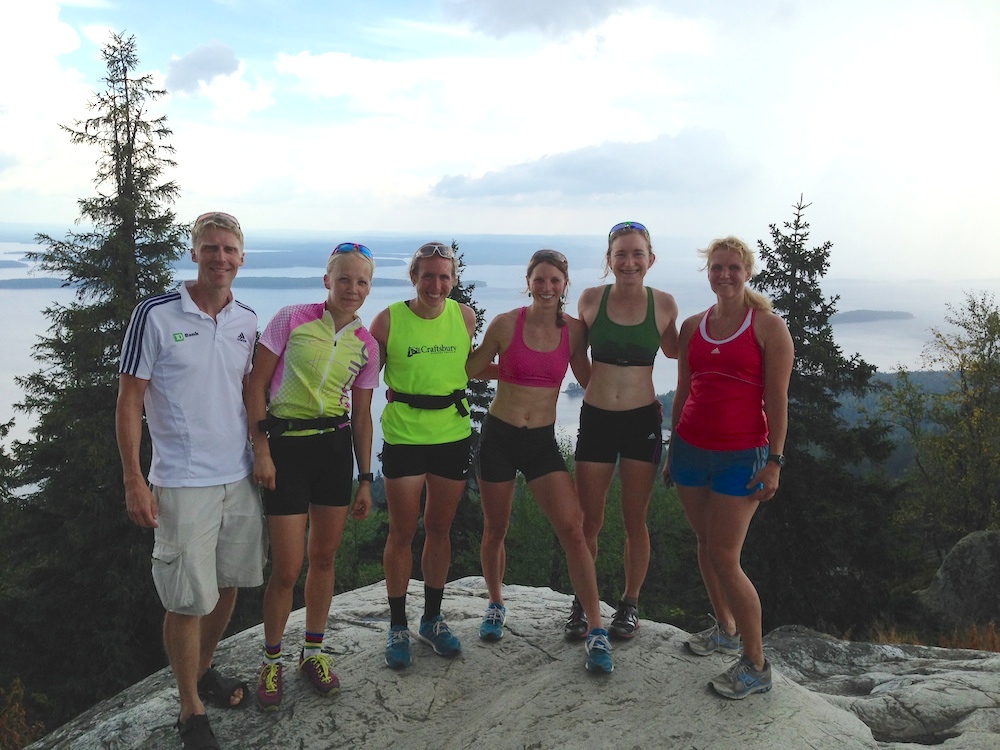 The U.S Biathlon women&#8217s group soon after an uphill interval session up Koli, the highest point in southern Finland, with coach Jonne Kähkönen (l) and his wife (r), who also rollerskied up. (Photo: Jonne Kähkönen)

Although Susan Dunklee and her U.S. Biathlon teammates Lowell Bailey and Tim Burke were finishing up the three-day Blink rollerski festival in Norway, two other females on U.S. Biathlon’s A-team — Annelies Cook and Hannah Dreissigacker — had a minor organization to get care of in Finland.

To near their Finnish coaching camp, most of which took location close to the 2015 Globe Championships venue at Kontiolahti, Cook and Dreissigacker competed in a 5-kilometer working biathlon race. Cook won and Dreissigacker placed second.

In an e-mail, U.S. women’s coach Jonne Kähkönen, previously the head coach of the Finnish biathlon staff, explained that the road race was “a bit different sport, but can make for a great training.” The nature of operating then shooting created it difficult, along with the relentless heat his team experienced while in Scandinavia.

We asked Kähkönen far more about the camp and what’s up coming for them in Sweden.

FasterSkier: How was it being in Finland and operating with one particular of your former athletes, Kaisa Mäkäräinen, again? How did this come about?

Jonne Kähkönen: I talked about a attainable joined camp with Kaisa at the finish of the winter and we finalized the information in the starting of the summer time. We had already decided to do this camp on the [Planet Championships] venue, but it was fantastic for us to have her join in. Kaisa did all the days of our camp together with us major up to the departure to Blink with Susan.

FS: What are your thoughts on the World Championships program? How does it suit your athletes?

JK: I would say any program is a good fit if the athletes are in shape..

This program has some certain features to it like the &#8216wall&#8217 climb and a prolonged flat section ahead of and after the shooting. These are the items that we will get into consideration with our training, but the most important is to enhance the general level of the athletes. Also the shooting selection can be a bit tricky in Kontiolahti, so it was very good for our women to have a solid camp there. We have had actually great racing here the last couple of instances at the [IBU Globe Cup] races, so I feel like it is a good match for our athletes.

FS: Have been most of your coaching sessions there?

JK: We spent most of the camp right in Kontiolahti to have as several sessions at the venue as attainable. We did a couple of sessions elsewhere although, one of them was an uphill interval session in Koli, the highest stage in southern Finland. The athletes did roller ski intensity up the paved road.

FS: What was it like possessing Susan, Lowell and Tim at Blink?

JK: We sadly [have been] only capable to check the live splits — really don’t get the Norwegian Tv here in Finland. I consider having three athletes invited to the races this year speaks a good deal about our crew and the degree exactly where they are correct now — particularly with the outcomes they have created now in the racing.

FS: What do their results there — with two podiums amongst Lowell and Tim — indicate?

JK: Blink benefits [are] just a element of summer season education because every person is in the middle of a difficult education block. At the very same time although, it is excellent to see that we are in the combine and it ought to increase the confidence to positive, seeing that they can be there just the same as every person else. For us the major objective was to have speak to with the field throughout the summer season currently, given that we usually won&#8217t see the global athletes throughout the summer that significantly. In the past we have had some joined time trials with some other athletes, but it was very good to have this level of competition with a complete stadium of spectators as effectively.

FS: Who will be in Torsby, Sweden, at the snow-tunnel camp this week?

JK: I will be in Torsby with all the three women, also the guys will be there with total staff. The purpose for the third week of the camp is to have a number of good sessions on snow in the tunnel, doing work on the strategy and also performing shooting with the longer skis on in the tunnel. For the shooting we will have the added challenge of possessing the Swedish group with us there for some of the shooting sessions.

FS: Any more stops right after that? Is the crew headed to Jericho, Vt., for the North American Cup rollerski races in two weekends?

JK: No other stops, back in the US soon after Torsby and all of our athletes will be in Jericho, provided that they are in complete health.