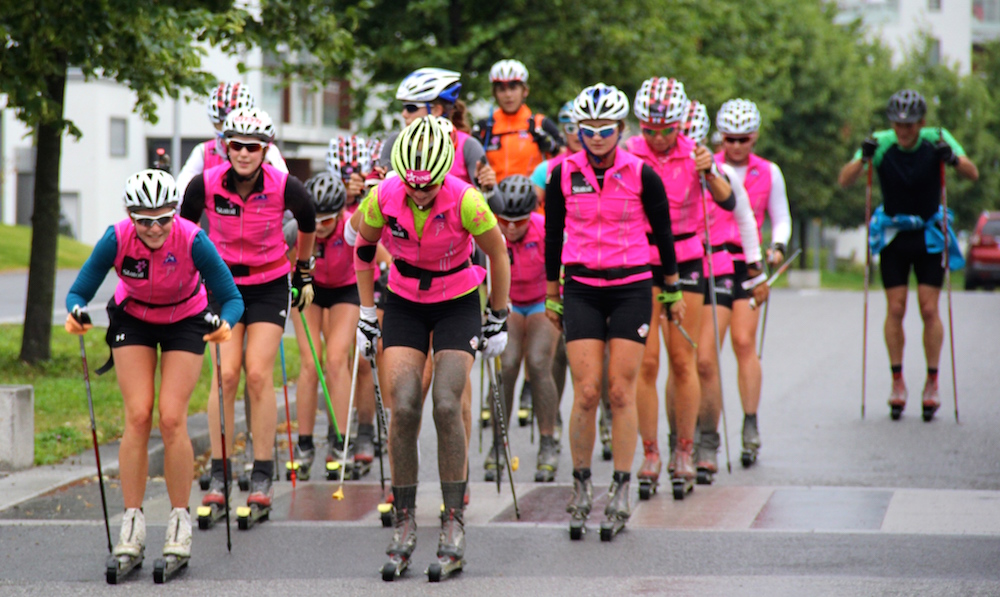 Americans and Norwegians train alongside one another at the 2015 International Junior Camp in Oslo, Norway. According to a recent study in the British Medical Journal, nearly 20 percent of Norwegian junior women had disordered eating as of 2010. (Photo: Bryan Fish)

A new study published in the British Medical Journal finds that nearly one in five female junior skiers and biathletes in Norway exhibits disordered eating (DE).

Research across sports and geographic regions has shown that elite athletes have a higher prevalence of disordered eating than non-athletes. For instance, a previous study found that 25 percent of all first-year students in elite sports schools in Norway showed disordered eating, and that for female athletes this primarily resulted from concerns about their appearance.

“Disordered eating is a disturbed and unhealthy eating pattern that can include restrictive dieting, compulsive eating or skipping meals,” Australia’s National Eating Disorders Collaboration explains on its website. “Disordered eating behaviours, and in particular dieting are the most common indicators of the development of an eating disorder. Eating disorders are severe and life threatening mental illnesses. An eating disorder is not a lifestyle choice.”

A 2015 report found that one in three elite-sport students in high schools in Norway’s Trøndelag region were sick or injured. Although a possible connection between the two phenomena was not explicitly investigated, the high prevalence of disordered eating could be a contributing factor: it’s hard to stay healthy while carrying a high training load if one has insufficient nutrition.

“[Eating disorders] have severe physical and psychosocial consequences, and are therefore not compatible with sports performance in the long run,” Ingvild Pettersen and her co-authors wrote in the new study.

Their research is notable because it focused explicitly on young female athletes in skiing and biathlon, achieving a large sample size. And the team looked beyond the elite sports schools to see whether sociodemographic factors may change the prevalence of disordered eating.

After the 2009/2010 season, Pettersen’s Oslo-based research group sent out surveys to all the young women who had finished in the top 30 of their age group in at least one Norwegian Junior Cup race. Of the 262 women contacted, 225 responded by filling out the Eating Disorders Inventory-2 and answering questions about their social and demographic backgrounds.

An athlete’s educational situation also played a role, with a high proportion — 28.9 percent — of women who were at elite-sports high schools exhibiting disordered eating. Less than 18 percent of those at any other type of school, including general studies high school, university, or a high school with a sports specialization, showed DE.

“The high occurrence of DE within these schools may be related to their environments,” the authors wrote. “[Elite sports schools] are known for having a high performance pressure. This can result in a performance-focused climate that can predispose to the use of dieting methods in order to improve their performance if the athlete does not cope with the pressure. In addition, the students often move away from home to attend these schools, which may increase the risk of poor nutrition without the parental control.”

The ski and sport schools have been working with a nutritionist as part of the Sunn Idrett (“Healthy Athletes”) initiative, founded in 2008 to help combat eating disorders in female athletes. Biathletes Tora Berger and Tiril Eckhoff and skiers Marit Bjørgen and Astrid Jacobsen are among the ambassadors for the program.

The NTG sport gymnasium system formalized its relationship with Sunn Idrett this year. At least one other elite sports school, Toppidrettsgymnaset I Telemark (TIT), has a dietitian on staff.

The study design did not allow the authors to address whether drop-out was caused by an eating disorder, as has been speculated in some previous research. The opposite could also be true: the athletes could have developed disordered eating after quitting their sport.

“Athletes who were no longer active had a significantly higher occurrence of DE… than those who were still active, implying that DE may be caused by a morbid fear of fatness and body image disturbances,” the authors wrote.

In other words, once athletes stop training and burning so many calories, they may develop unhealthy eating habits to try to maintain their appearance with lower caloric intake.

In fact, in the study the researchers found that disordered eating in these young athletes was more correlated to body image dissatisfaction than by a drive for thinness.

But as to its ultimate cause and emergence, they concluded that more data was needed. Even by age 17, one in 10 of the women showed disordered eating. Stemming that pattern requires an understanding of the sports and social environment at an even younger age.

“To better understand the causal relationship of the predictors of DE, longitudinal studies are needed on both male and female athletes younger than the junior competing level,” the authors concluded. “There is a need for theory-based research on how we can change and prevent DE behaviour in sports. We need to identify psychological constructs that may influence eating behaviour in sport, and how those factors exert their influence.”