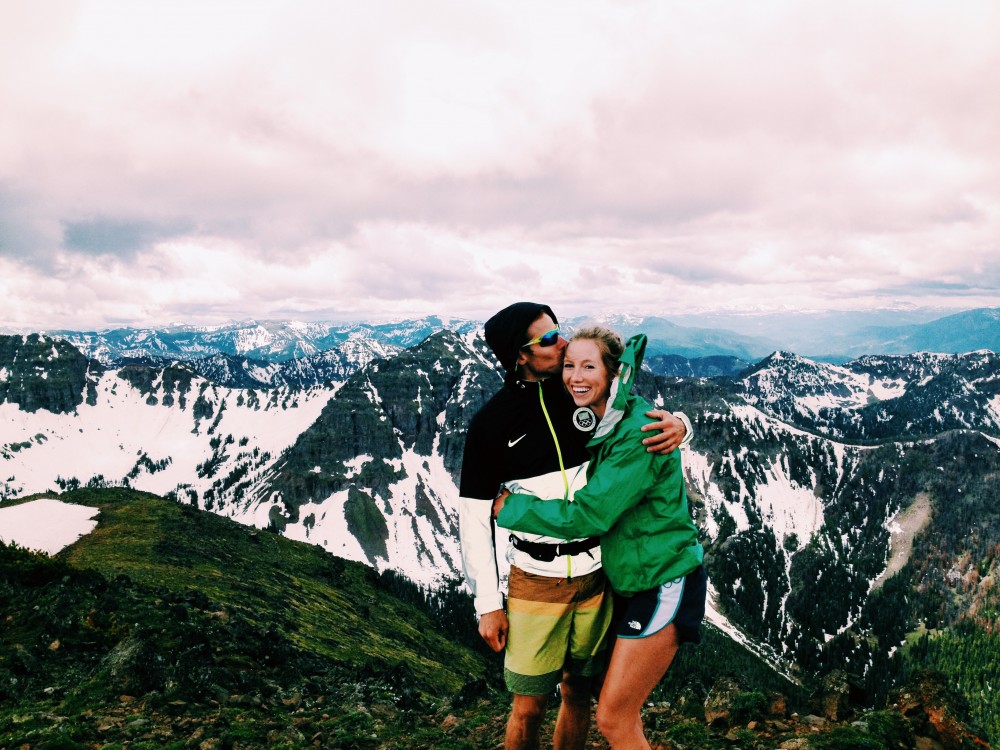 Andy Newell (l) and Erika Flowers at the top of Mount Blackmore in Bozeman, Mont., in June 2014. (Photo: Anya Bean)

On the first Friday of the month, while finishing up work on her computer, Erika Flowers felt her phone vibrate from an incoming text. The opened message asked her to check on the grill in the backyard of her apartment in Stratton Village, Vt. The sender was her boyfriend of four years, Stratton Mountain School (SMS) T2 teammate and current U.S. Ski Team (USST) member, Andy Newell.

Flowers walked outside, not noticing the grey-blue thunderclouds beginning to form above the not-so-distant Green Mountain peaks. The 26 year old’s mind was preoccupied — the busy workweek she’d had, the quickly approaching arrival of her younger sister for Independence Day weekend, the upcoming departure of her boyfriend to Norway for a training camp, her own training.

As her thoughts continued to turn, Flowers stepped up to the grill and lifted the lid, expecting to see the soft red and orange glow of burning coals. To her surprise, however, she was not greeted by the smoldering smokey sight and smell of ember-ed charcoals. What she found was another message, this time one on a blue painted rock. In a familiar script, the rock read, “You’re cordially invited to cocktails at Gale Meadows Pond — bring an umbrella, it will be an adventure…”

Sitting in the stern of a red, canoe-type fishing boat he bought about two weeks ago, Newell remains unsure of how much longer he will continue to ski race. A three-time Olympian, World Cup regular and a USST veteran for the past 12 years, his ski career ultimatum is to roll with the punches. Regardless of what the 32 year old decides within the next few years, one thing is certain: whatever decisions he makes will forever be alongside those of Flowers. 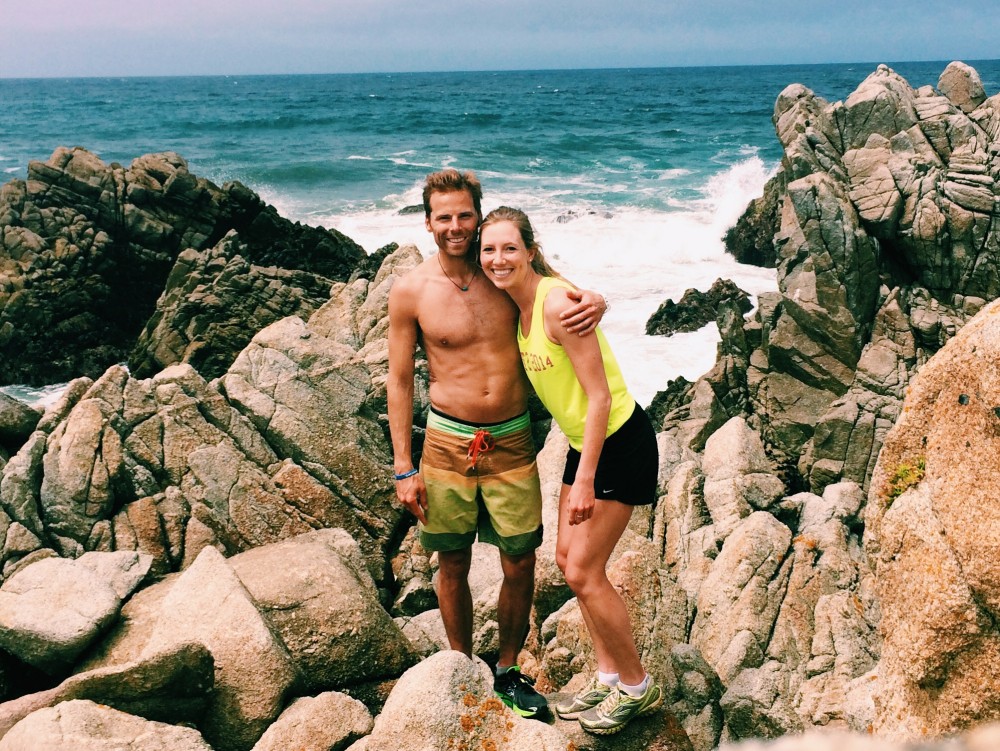 “I think that was one of the reasons, at least I wanted to [get married] now and not wait a few years … is that so much can happen in professional athletics and Erika and I wanted to enjoy each other’s company before we have to grow up and get serious,” Newell, a Shaftsbury, Vt., native said on the phone while in Norway. “It’s kind of fun to be married and connected with the person that you love and not have to worry about having to be grown up. We’re both enjoying the fact that we’ll just keep ski racing, having fun, and taking things as they come.”

Rounding the final stretch of the path that circumvents Gale Meadows Pond — a trail she and Newell have trekked numerous times for fishing trips — Flowers was greeted by the sight of her boyfriend, Newell, fishing rod at the ready, reclining in the back of his new boat. During the twenty-five minute walk to him, she had uncovered quite a few more blue painted rocks — each with the symbols “E + A” and various other images: music notes, mountains, the word Montana (Flowers’s hometown being Bozeman, Mont.).

With the unveiling of each rock and as each step down the trail brough her closer to her destination point, Flowers admitted that her suspicions gradually began to arise.

“At first, I was like, ‘Oh, what a cute way to get me out of the house,’” Flowers said on the phone while in Vermont. “Had no idea what was going on, zero idea … then I started to notice that each rock had different things painted on it … all these things that we had done together, that we enjoyed doing together. So then I was like, ‘Hmmm, this seems like a lot of effort for just a date.’ That was like the first time that it [a wedding proposal] crossed my mind.”

It was not whether the answer would be yes or no. It was not whether he had chosen the right one to ask. It was the weather. That was what weighed on Newell’s mind the most as he waited for Flowers climb into the prow of his fishing boat.

“I was a little bit nervous because it was about to thunderstorm really badly and I was trying to make it a surprise,” Newell reflected. “So I was more nervous about the weather and her not making it to the lake on time, than her saying yes or no … I just didn’t want to ask her casually. I wanted to do something a little more fun than that.”

As a junior waiting in line to get her poster signed by a professional World Cup ski racer, Flowers never would have guessed that the black sharpie signature she was about to receive was the name of her future finance. To her the photograph she held of Newell hucking himself backwards over a ski jump was simply that of a renegade nordie. 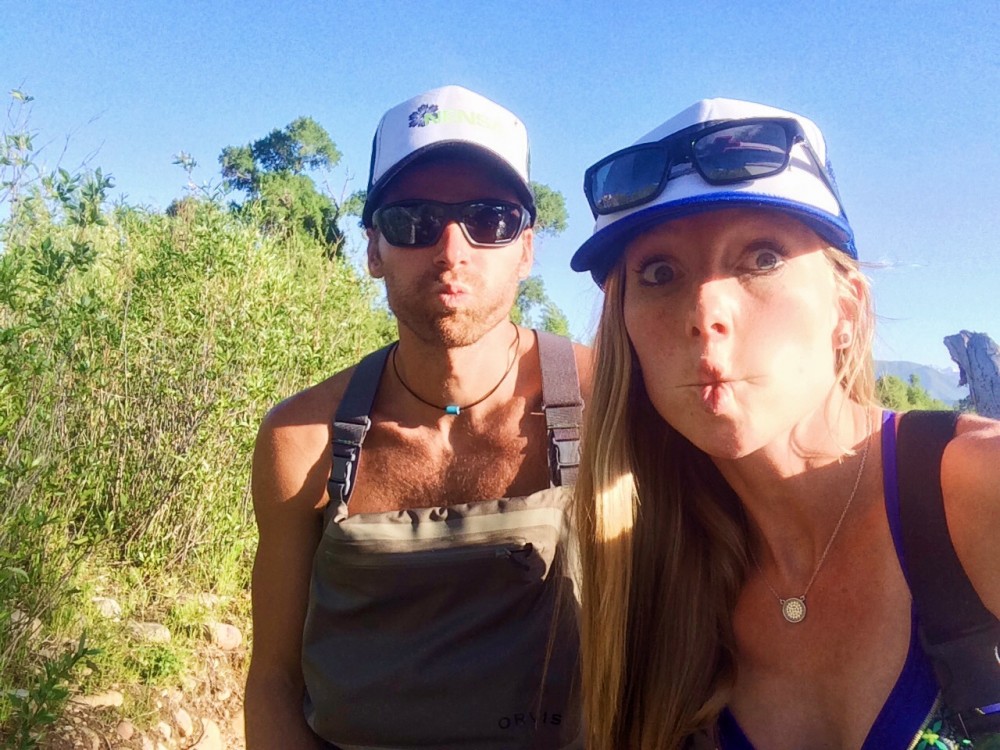 Erika Flowers (r) and Andy Newell make like fish during a fishing trip at Provo River, near Park City, Utah, in May 2015. (Courtesy Photo)

“I think my first impression from him from afar was ‘Oh he’s just this badass skier dude,” Flowers reminisced. “Technically, the first time I met him when I was like a junior skier and he was signing my poster. But he doesn’t remember that.”

Perhaps to Flowers’s surprise, the interaction was one Newell never forgot.

“We actually met for the first time at this training camp up in Lake Placid that she had been invited to come train with REG or something like that,” Newell said. “But we didn’t really hang out until Erika was out of college [in 2012] and we started training together at Stratton. Then we started hanging out together everyday.”

“Whether we’re going surfing in Costa Rica or fishing in Montana, Erika has a nice adventure side that compliments my craziness a little bit,” Newell said. “She makes me a much better person when I’m around her. I think we both make each other better people. So I knew that she was the one once I realized that.”

Flowers indicated that for her, what seals the deal is the care Newell demonstrates for her and all those he knows.

“From the little things that he does, like singing me songs about peanut butter toast in the morning to being there [when I] broke my elbow or when I missed a Taylor Swift concert,” Flowers said. “He’s just the most caring, thoughtful person I’ve ever met.”

As a junior waiting in line to get her poster signed by a professional World Cup ski racer, Flowers never would have guessed that the black sharpie signature she was about to receive was the name of her future finance.

The support the two show each other — even amidst frustrations — also makes their relationship strong.

“Him trying to teach me how to surf almost every spring,” Flowers said. “It’s one those things that’s extremely frustrating, but also so fun at the same time. He tries so hard to help and I get so angry, but he’s very patient which I appreciate.” 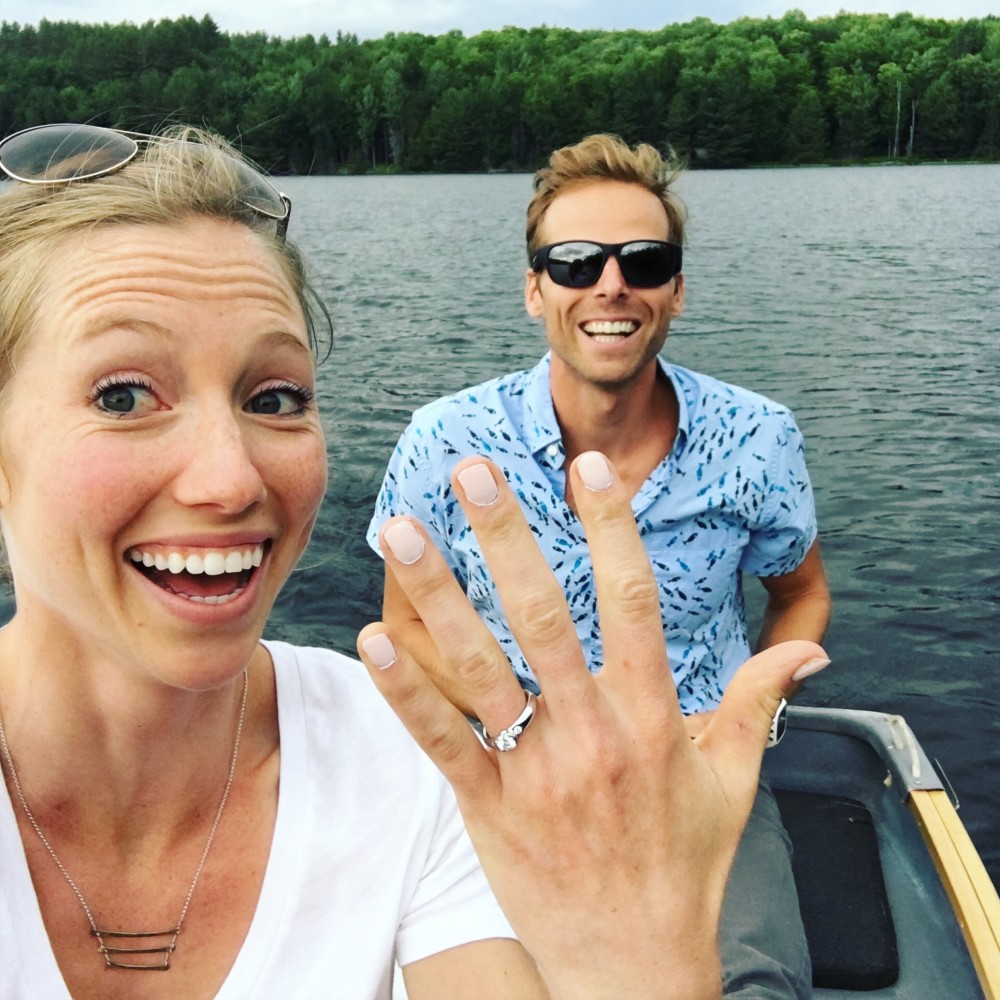 Erika Flowers (l) and Andy Newell flashing smiles on Friday, July 1, while out fishing on Gale Meadows Pond on the date of their engagement. (Courtesy photo)

“And then him trying to learn how to fish has been entertaining,” Flowers added. “He tries so hard to be a Montana fisherman and he’s so bad at it. But I love it and he keeps trying … it is the one thing I can do that he’s not better than me at, so I’m holding onto it.”

Floating across the mirror-like top of Gale Meadows Pond, Newell and Flowers discuss a broad range of topics: plans for the summer, their futures in skiing, adventures they have had — like climbing Blackmore in Bozeman, Mont. with Flower’s newlywed parents –and their ones yet to come.

“If I could ski forever I would, but the reality is you someday have to make money and if you’re not feeling like you’re improving or getting better, then it maybe becomes less fun,” Flowers said of life as a professional cross-country skier. “That was when he said one of the sweetest things, [which] was, ‘But I know that no matter what we do next, or what happens within the next few years, whether skiing goes well, or terribly or what have you, I know that I want to be with you through all that and onto the next thing.

“Then eventually he got to the point where he was like, ‘I love you so much and I love adventuring with you and I want to be able to go on adventures with you for the rest of our lives,’ ” she added. “Then he pulled the ring out and asked me if I would marry him … He crushed it.’ ”

Drifting back to the shore as two less fish in the sea, the couple’s next steps now revolve around bridal bouquets, questions over cake flavor and color schemes, and finally, where to post mark their wedding invitation returns.

“I’m quite sure [the wedding] will be out in Bozeman,,” Newell said. “Sometime next summer or fall. We haven’t planned too much, but I’m sure it will be Bozeman and it will be a good time.” 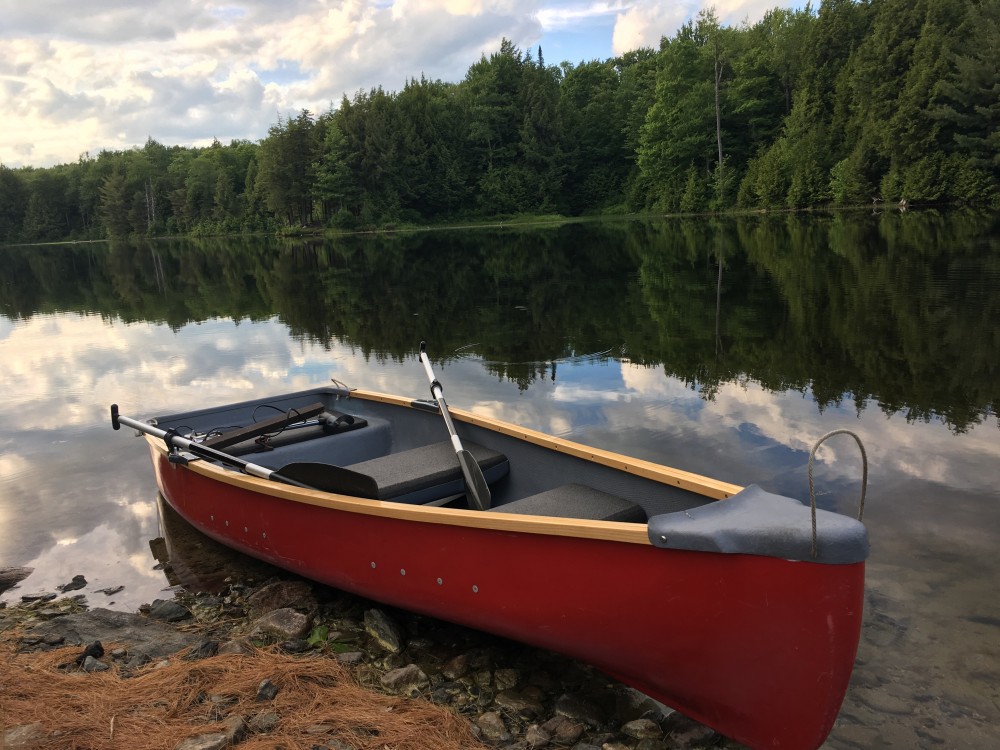 Andy Newell’s new fishing boat and the site of the proposal. (Courtesy Photo)