Russia’s Sergey Ustiugov (4) leads three Norwegians, including Didrik Tønseth, and the rest of the field during the men’s 30 k skiathlon at 2017 Nordic World Championships on Saturday in Lahti, Finland. (Photo: John Lazenby/Lazenbyphoto.com)

A half a second earlier on Saturday, the Norwegian’s shot at the win was still within sight. He and Russia’s Sergey Ustiugov had broken away from the front pack around the 20 k mark, put close to 10 seconds on the rest of the field with the next k, and almost quadruped that by the bottom of the final climb. 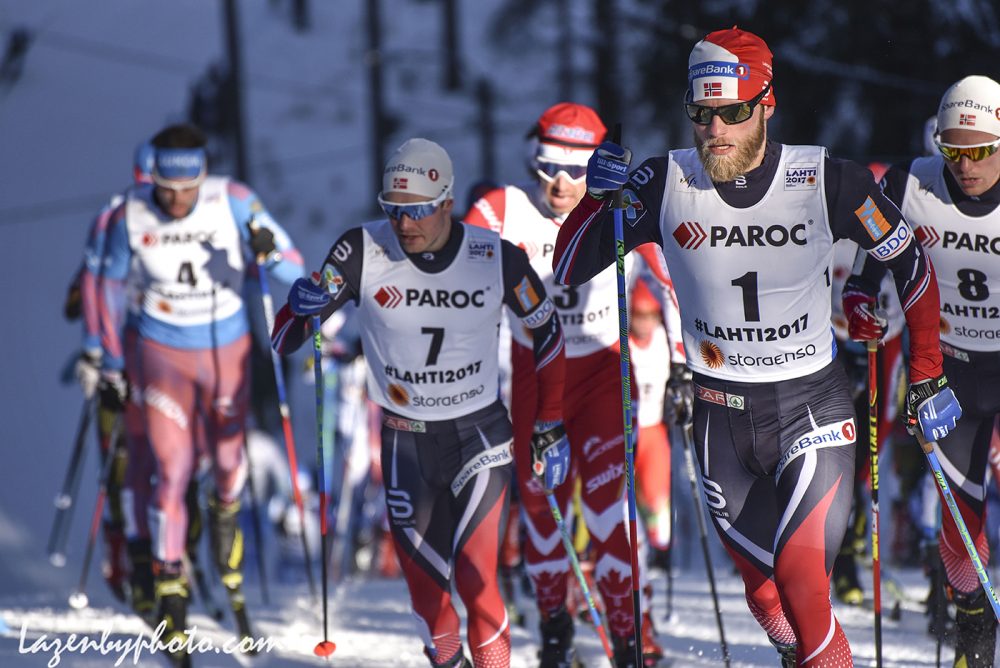 Heading into the hill, there was only one man to worry about — a scene fairly familiar for the Norwegian. In last season’s 30 k skiathlon in Lahti, it was during the same final ascent that Sundby pulled away from his teammate Finn Hågen Krogh to take the win.

Like last year, the Norwegian upped his tempo as he began the final climb. His high turnover surpassed Ustiugov’s, and Sundby glimpsed at gold. But as just as he secured a slight lead over the Russian, Sundby’s pole slipped, sending him off balance and in a forward fall to the ground.

As Sundby stood up, his right pole was broken. While it didn’t take long for a new one to reach him, by the time he had grasped the fresh pole grip, the Russian skier was long gone.

“You have to remember I was skiing side-by-side with the fastest guy in the world, so if I would have one chance, I had to try and make a move,” Sundby said during the post-race press conference. “If there was a possibility to gain a few meters, I had to go for it…Unfortunately it did not work and I made a mistake.”

With no Norwegian to contest his name, Ustiugov descended the final downhill, cornered the final stretch and crossed the finish line first in 1:09:16.7 hours for his first World Championships gold (he took silver in Thursday’s sprint, behind Italy’s Federico Pellegrino). Finishing 6.7 seconds later in second place was Sundby. 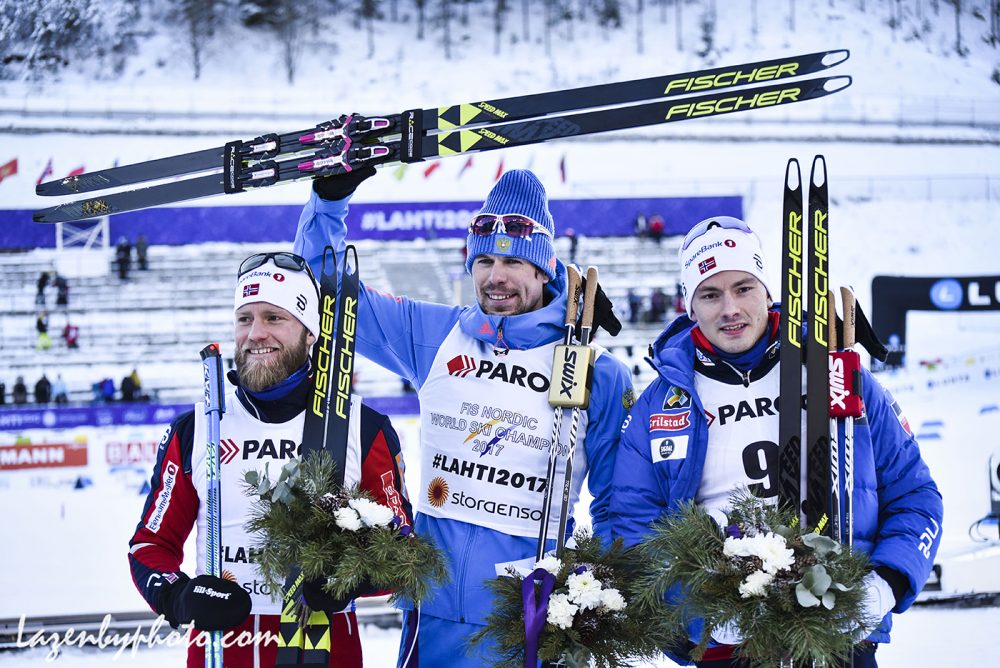 “It is a great achievement for me,” Ustiugov said the press conference through a translator. “I was disappointed after the sprint so to win the gold medal is amazing. It is not only my success. The whole team did a great job.”

Crossing third for the men was Krogh, 31.8 seconds after Ustiugov. The bronze medal is Krogh’s first in an individual World Championships race. Although Krogh indicated he tried to go with Ustiugov and Sundby when they made their break from the pack, he admitted the two were in a league of their own in terms of the front pace.

“The second lap of skating, I saw these guys make a gap,” Krogh said of Ustiugov and Sundby during a press conference. “I tried to push hard to hold it, but after a couple of kilometers I realized it was going to be too hard to catch them, and then I tried to save a little energy to secure the bronze.”

The first man out of the exchange for the 30 k skiathlon on Saturday was not from Norway, nor Russia, or even Sweden. It was Canada.

After racing within a front group of nearly 25 skiers for the first 15 k, Canada’s Alex Harvey led the mass during their final classic leg stadium descent and into the ski exchange. And as racers headed back out on course for the freestyle portion, it was once again the red maple leaf in the lead. 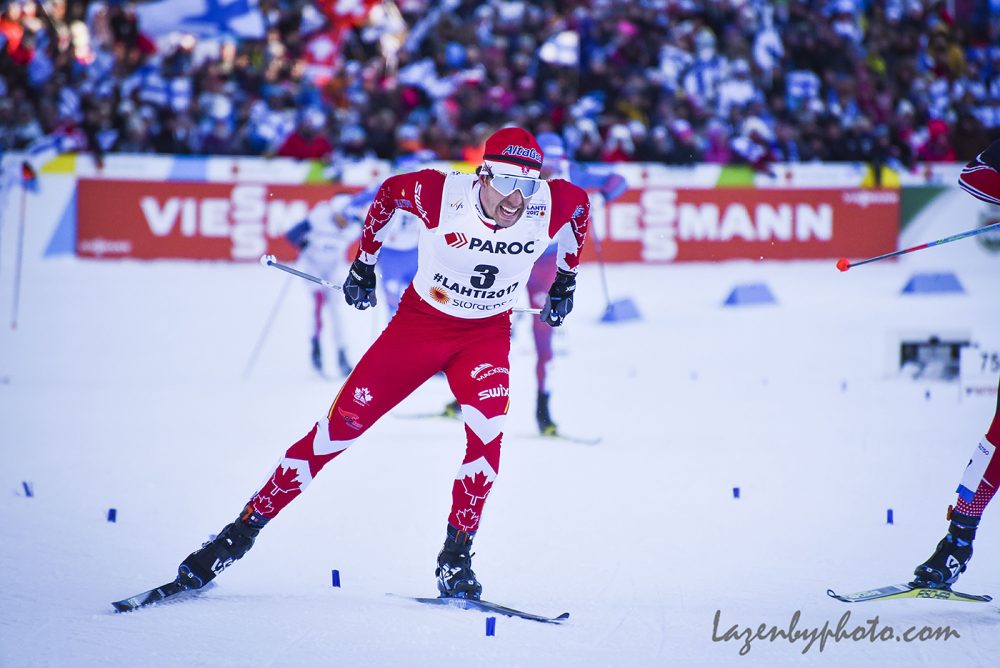 While Harvey intended to position himself up front early in the skate leg, he also pointed out that he had the skis to do so, even after one broke in a fall.

“I had really, really fast skis, both in classic and skate,” Harvey said. “Broke my classic ski during the last lap. Ustiugov cut me off and I crashed on the climb and broke my ski, but they were still running really well and I was still able to come to the exchange in the lead.”

For most of the classic portion of the race, Harvey had raced within the top 10, at times the top three, following Sundby and Ustiugov, along with Norwegians Krogh, Sjur Røthe and Didrik Tønseth, as well as Finland’s Matti Heikkinen, Great Britain’s Andrew Musgrave and Sweden’s Calle Halfvarsson.

The large front group remained intact through the exchange, with Harvey in front. Within a few kilometers, however, Sundby and Ustiugov tookover the reins, and Harvey soon got caught behind Heikkinen. By the 20 k mark, Harvey could see his fight for the podium would be for bronze.

“On the second lap of skating I was following Heikkinen and I kind of was in a good position in fourth there able to react,” Harvey said, referring to any moves made by Ustiugov or Sundby. “But [Heikkinen] just completely blew up. That’s the moment I’d like to relive in the race because I feel like I had the legs to go with the first two. But once they had a gap, it’s so windy out there, it’s really hard to come back.”

The battle for third ensued, with Harvey holding on tight to any moves made by Krogh, Røthe or Tønseth. Coming into the final downhill turn, the Canadian was fourth and Krogh in third place, at the front of the chase pack, was making a break. The Norwegian held the lead and Harvey eventually crossed fifth (+33.3), just two tenths of a second behind Røthe in fourth (+33.1).

“It’s disappointing to be so close to the goal,” Harvey said, explaining that Saturday’s skiathlon was one of the championships races he had been targeting a medal in.

“But now I know that I’ll have to ski in the top three, not the top four, for the 50 k skate,” he added, indicating that his next individual target event will be the men’s 50 k freestyle mass start.

Graeme Killick and Knute Johnsgaard also both competed in the skiathlon for Canada, with Killick finishing in 47th (+6:23.5) and Johnsgaard 55th (+8:40.2).

Canadian Devon Kershaw, did not compete in Saturday’s event due to not feeling 100 percent. Though he explained in an email that he has had good results in the skiathlon event over the course of his career, his world champs focus is on other races.

“The 30km [skiathlon] is punishing, and with other races slated later in this World Championships it made the most sense to take another day easy and let myself come back perfectly,” Kershaw wrote in an email. “A bit of bad luck not being able to race this first race (the 30km), since I had planned to do it, and the skiathlon has been kind to me in my career, but ‘delay doesn’t mean denial’ as an old sports psych and good friend Cal Botterill would always say to me –  so I won’t be denied of chances to show my fitness later in these Championships.”

Kershaw’s next focus will be the men’s 15 k classic on Wednesday. 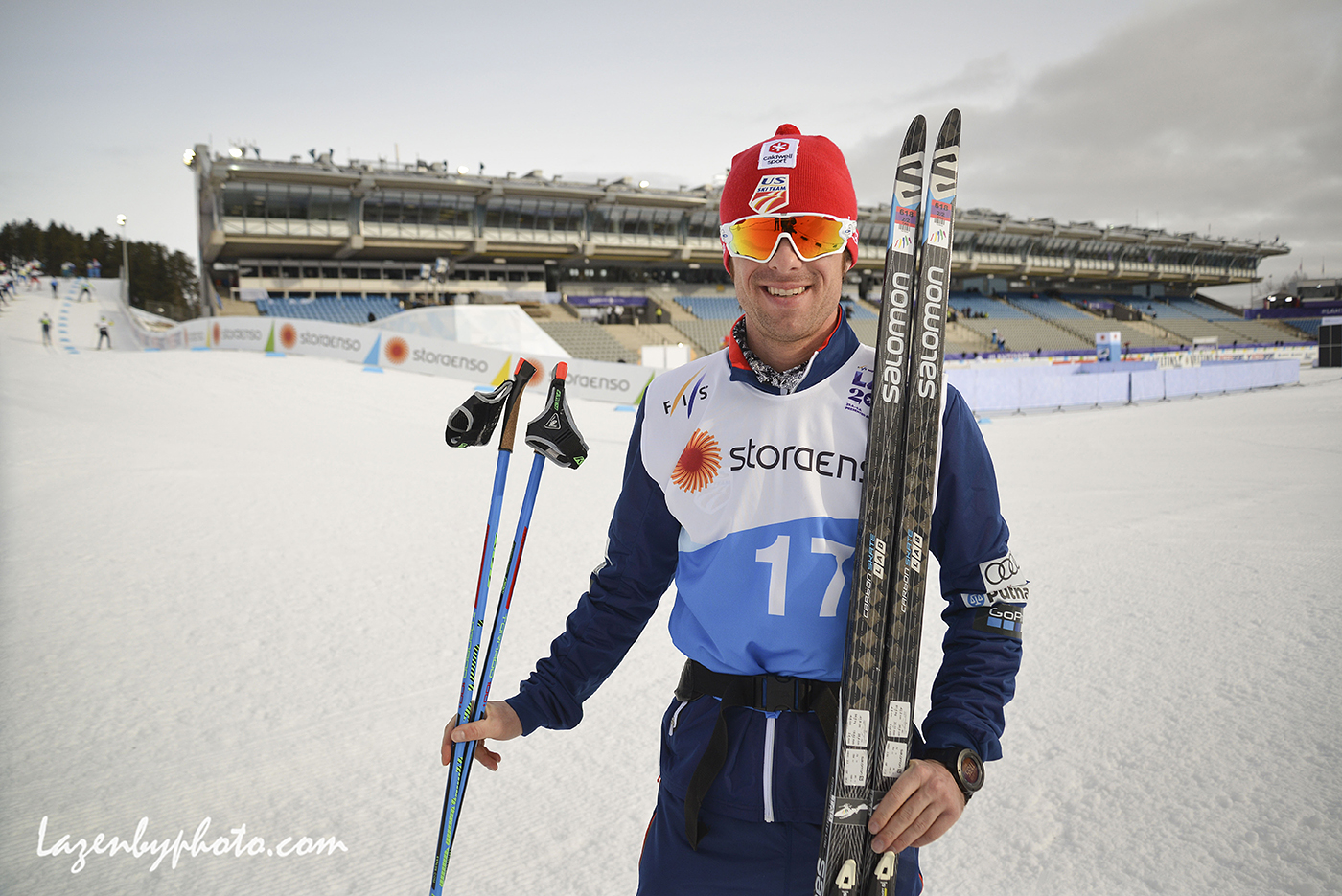 Elliott explained that while classic skiing may not be his strength, Saturday’s classic segment was one of his better efforts.

“It was quite apparent that those guys were going to charge from the front, at a pace I wasn’t comfortable with,” Elliott said. “My strategy was to try and save something for the skate leg, wherever I was, to really let my skating take over, and try to get in the mix after that. After the first lap I knew I was going to have to dig deep in the classic to have a shot, and that was the hardest I’ve gone all year, the deepest I’ve gone.”

Elliott attributes part of that ability to dig deeper to his growing fitness. Though he had a successful last season and reached the podium at this year’s U.S. nationals, he indicated that his fitness is just now coming around.

“Nationals were great, but I didn’t feel like I had reached my peak form from last year, and I feel like it’s coming together here,” Elliott said. “I felt great in the skate leg. I was with Kyle, and we worked together really well to pick up as many places as we could, but we were out of contact, because of us, not because of the techs. But I think that bodes well of things to come for Kyle and I, in the skate, especially me, in the skate 50 k. To be able to go that deep in the classic and to skate pretty well. I think it’s great for the 50. I’m pretty excited.”

Elliott skied much of the race alongside Bratrud, who finished five seconds behind him. Bratrud is also focused on the 50 k, and he viewed the skiathlon as a good opportunity to get competition experience for his later races during his second World Championships. Despite also breaking a pole during the first part of his classic race, Bratrud maintained composure and was able to work his way up through the results.

“I’m shooting for the 50 k, but I had really good energy today,” Bratrud said. “I felt like I was at the back of the lead group, moving my way back up from the start in the classic, and then I got my pole stomped on, and broken at about 6 k. I spent the next 5 k exchanging different length poles, until I finally got my pole, and from there I don’t think I lost too much time. I hooked up with Tad, and we were able to skate pretty fast.”

As for the 50 k, Bratrud described it as a “brutal course, but if you have the legs, you can do some damage,” he said. “I’m really excited for it. It’ll be a good way to end it. I’m hoping to do the 15 k classic, and the relays before that, but I’m excited for the next week.” 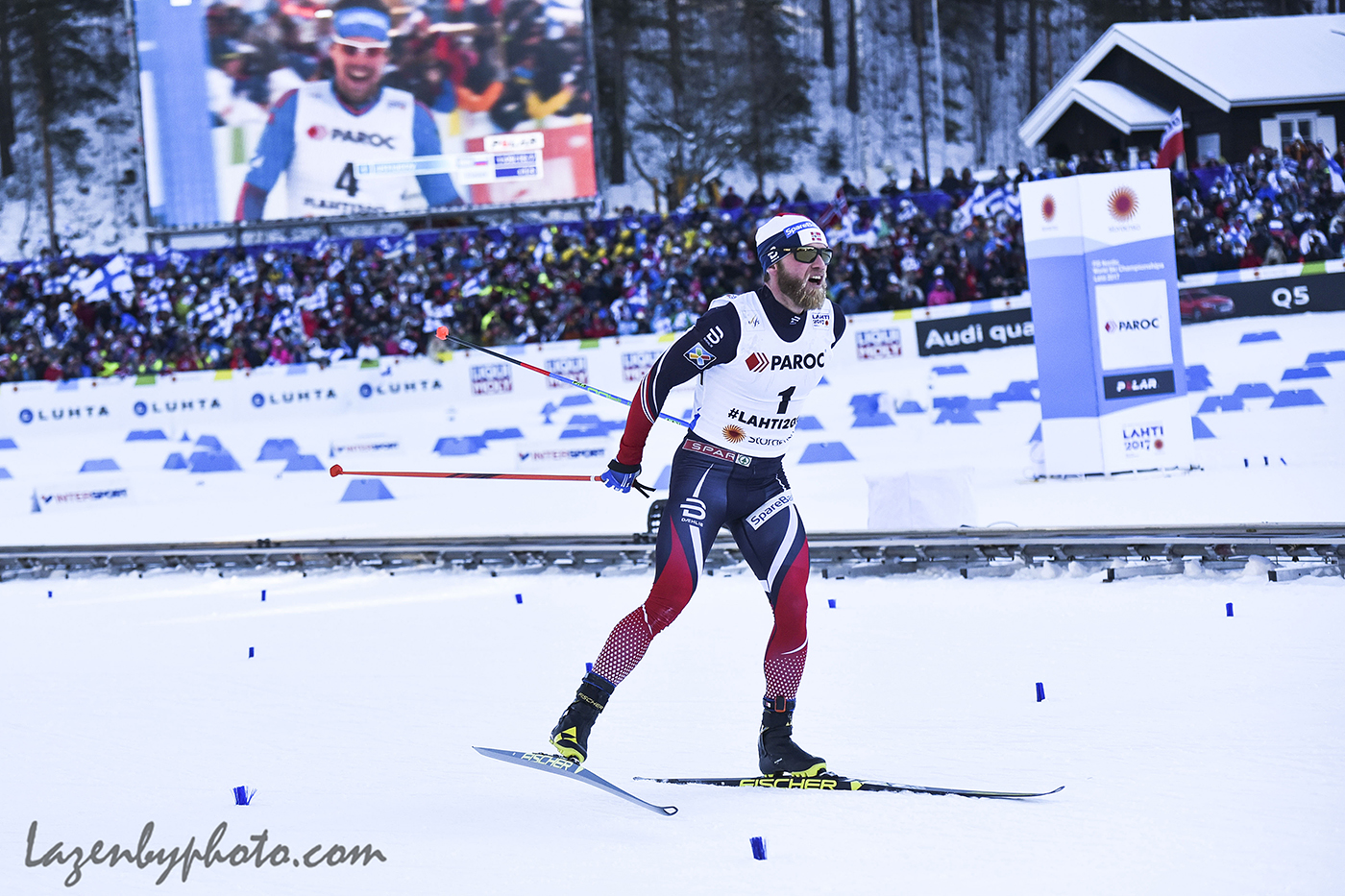