In the women’s 15-kilometer classic mass start on Sunday, Norway swept the podium with Marit Bjørgen taking the win in a time of 41:28.8 in Falun, Sweden. Crossing just half a second behind her was her teammate, Ingvild Flugstad Østberg in second place. Rounding out the podium was Heidi Weng in third (+8.1).

After losing the skate sprint yesterday in a photo finish to Italy’s Federico Pellegrino, Emil Iversen ascended to the top step of the podium in the men’s 30 k classic mass start on Sunday in Falun.

The Norwegian was often near the front, but hadn’t tried to lead a breakaway like his teammates Martin Johnsrud Sundby and Sjur Røthe did earlier in the race. In the final two kilometers, Sundby – the overall World Cup leader – put in a sprint to try to drop the field. But Iversen caught up, drafting his veteran teammate into the stadium. In the final up-and-over before the finish line, Iversen made a pass and then accelerated down the finishing stretch to beat Sundby by 1.14 seconds.

“I got motivation from yesterday’s last 20 meters,” Iversen told FIS in a finish-line interview. “So today I fought all the way, and I was really stronger. It is amazing for me to be second yesterday and first today. I’m really proud of that.”

Calle Halfvarsson, who had been falling off the back of the lead pack just a few kilometers earlier, managed to get back to the front and claim third place for Sweden (+1.72 seconds) in a photo finish with Røthe (+1.76 seconds). Niklas Dyrhaug was next (+2.52 seconds) to give the Norwegian men’s team four in the top five.

Alex Harvey was the lone Canadian on the start line. After skiing near the front of the field for the early part of the race he was dropped by the lead pack in the final kilometers, finishing 15th (+1:17.5). Russia’s Alexander Loginov (center) is greeted at the finish by his teammates Irina Starykh, Svetlana Sleptsova and Alexey Volkov after anchoring his team to the gold medal in the mixed relay at the 2017 IBU Open European Championships in Duszniki-Zdrój, Poland. (Photo: IBU)

[UPDATED] The Russian victory in the final 2 x 6 + 2 x 7.5-kilometer mixed relay event of the 2017 International Biathlon Union (IBU) Open European Championships in Duszniki-Zdrój, Poland, was only briefly in doubt, when Alexander Loginov skiing the anchor leg required all spares in his prone shooting stage. But with his final shot he managed to also hit that target to avoid the penalty lap, leaving the range with a lead of more than 30 seconds.

Loginov then did not need any spares in the last standing stage, and could take his time on the final loop. Unlike Russia’s Evgeniy Garanichev earlier in the day during the single mixed relay, he also managed to pick up a flag for the final meters of the race, crossing the line in a time of 1:12:26.0 hours.

The Russian team with Irina Starykh, Svetlana Sleptsova, Alexey Volkov and Loginov led from the first exchange and required only six spares with zero penalties.

Behind them, a number of teams vied for the positions on the podium. Sweden initially looked like a strong contender exchanging in second place after the women, but fell back with three penalty laps to only finish 10th.

Still six seconds back after the final shooting, Norway’s Fredrik Gjesbakk caught up to and outsprinted Ukraine’s Ruslan Tkalenko in the finishing stretch to claim the silver medal (+36.4) with the bronze left for Ukraine (+37.1).

“I thought that I made sufficient gap to win silver,” Tkalenko told the IBU. “But in the end, on the final downhill before the finish, I was very surprised when the Norwegian guy passed me, I truly did not expect that.”

The Norwegian team with Karoline Erdal, Marion Rønning Huber, Erlend Bjøntegaard, and Gjesbakk needed nine spares and had no penalties.

Ukraine with Anastasiya Merkushina, Yulia Dhzyma, Oleksander Zhyrnyi (who originally started for Russia before making the switch in 2014) and Tkalenko required six spares, and Dhzyma had to ski a penalty lap only temporarily setting the team back.

Bulgaria finished fourth (+1:16.4), with its anchor Vladimir Iliev narrowly beating Czech Republic’s Lukas Kristejn (+1:17.4) in the finishing stretch. Both teams needed 11 spares and had no penalties. Starting at the back of the field in bib 20, US Biathlon’s Emily Dreissigacker got her team off to a strong start with a clean prone shooting and one spare round in standing, exchanging in 10th, a minute behind the leaders. Hallie Grossman needed one spare in each of her stages, tagging off to the men in 14th position and now 2:39 behind. Max Durtschi also had one miss each in prone and standing, coming into the last exchange still in 14th position, but another minute back. Jakob Ellingson required all three of his spares in his prone shooting stage narrowly avoiding the penalty lap, and one more in his final shooting stage. As the team from Finland was racing over a minute behind the Americans, he was able to keep the 14th position into the finish (+4:47.4), with a team total of nine spares and no penalties overall.

For Biathlon Canada, Erin Yungblut starting in bib 19 shot clean in her prone stage and required two spares in her standing shooting, tagging off in 18th position and more than two minutes back from first. Leilani Tam von Burg stayed clean in her prone shooting stage and needed one spare in standing, moving up two positions to exchange in 16th place, yet more than four minutes behind the leaders. After the exchange to the men, both Matthew Neumann and anchor Carsen Campbell managed to shoot clean in all of their stages, but lost additional time on the course to finish 16th (+6:39.9) ahead of four lapped teams.

Canada had the best shooting result of all 20 teams starting the relay, with just three spares and no penalty. Earlier on Sunday, pretty much the only thing that went wrong for Russia’s Daria Virolaynen and Evgeniy Garanichev in the single mixed relay happened on the last meters of the finishing stretch, with Garanichev gesturing for a Russian flag he wanted to cross the line with. But the handoff was too short and the flag dropped past his outstretched hand to the snow. He glanced back, weighing if his lead was big enough to ski back, but decided it was not worth the risk, instead skiing into the arms of his partner waiting for him behind the line in a time of 37:10.2 minutes.

Russia needed seven spare rounds and incurred zero penalties. Garanichev secured the victory in the final shooting, when he only needed one spare – albeit fumbling a few seconds to insert it – while his direct opponents standing next to him required more time to hit their targets.

“Probably, I took some risk at the last standing,” Garanichev said, according to an IBU press release. “I wanted to shoot fast and clean, but missed with the last shot. But in general, I felt very comfortable; came and worked at the range in my rhythm.”

6.3 seconds behind, Norway with the team of Ingrid Landmark Tandrevold and Vetle Sjåstad Christiansen placed second, with seven spares and zero penalties.

“These are very short loops,” Christiansen commented on the fairly new, single mixed relay format. “You feel the pressure from the crowd and to shoot fast every time.”

To big cheers from their home crowd fans who had come out to the Duszniki Arena in beautiful but cold weather, the Polish husband-and-wife team of Krystyna Guzik and Grzegorz Guzik placed third with just five spares and zero penalties (+13.9), not quite able to keep up with Christiansen on the final loop after leaving the range together within a second.

“It is so nice to win a medal here in Poland,” Krystyna Guzik said. “We were both very disappointed with all of our mistakes in the other competitions. So today, we were relaxed and laughing before the competition, hoping not to have those mistakes again. We did not … and now have a medal.”

It was the first medal for Poland at these championships. For Biathlon Canada, Sarah Beaudry and Aidan Millar required seven spares during their race and had no penalty, just like the winning Russians and Norwegians, but could not quite keep up with the best teams on the course in the fast-paced race format with short loops somewhat comparable to a team sprint in cross-country.

Beaudry cleaned her first shooting stage and then needed one spare to hit all targets in standing. At the first exchange Canada was 10th, 35.8 seconds behind the then leading team from Poland.

Millar missed one shot in his first prone stage, leaving the range again in ninth position. Then he needed two spares in his standing shooting on the way to exchanging back to Beaudry in 11th (+56.4).

On her second leg, Beaudry had one miss in prone and required two spares in standing, falling back a bit to exchange in 13th (+2:12.0).

On his final leg, Millar was able to shoot clean in both stages, reducing the time gap to the top but not able to make up another position, and finished in 13th place (+1:56.1).

US Biathlon is only represented with two women at the Open European Championships in Poland, and decided to forgo a start in the single mixed relay, instead entering a team in the mixed relay later on Sunday. 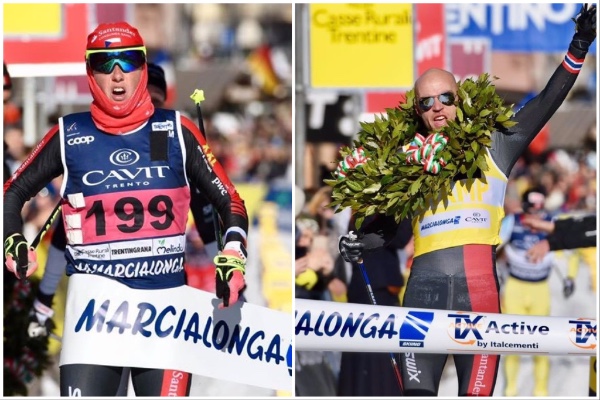 Tord Asle Gjerdalen won the Marcialonga, a Worldloppet and Swix Ski Classics marathon for the third time – in a row. This year was on a shortened course, “just” 57 rather than the traditional 70 kilometers.