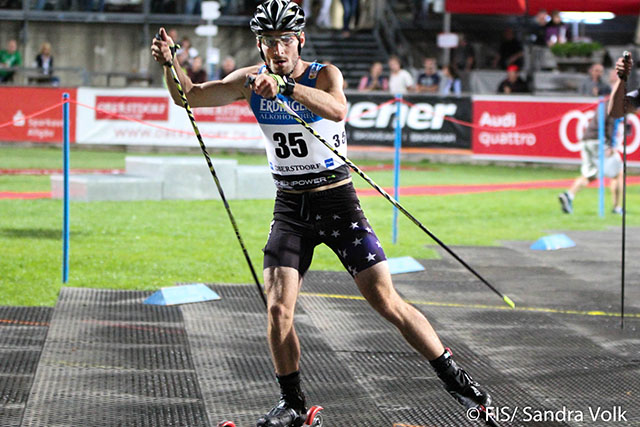 Logging hours: the rollerskiing, the jumping, running, strength and the in-between. For full-time athletes breaking up the quotidian cycle can be a spark. For the U.S. Nordic Combined team, late August and early September were spent racing events in the International Ski Federation (FIS) Nordic Combined Summer Grand Prix.

The last stop on the condensed three-venue tour was hosted by Oberstdorf, Germany, on Sept. 2 and 3. There, two things of note were evident.

First: 18-year-old Norwegian phenom Jarl Magnus Riiber flat-out dominated. He was first in  three of the four individual races he contested. (On the second leg of the four Grand Prix individual races, Riiber scored the highest in the jump portion — he did not enter the roller ski leg.) Despite scoring in only three of four events, Riiber won the Grand Prix overall.

Riiber’s jumping dominance was sustained. In both Oberstdorf races, Riiber was the highest-placed jumper heading into the 10 k ski leg. On Friday’s race, the next closest skier, Germany’s Tobias Simon, started one minute and four seconds back. For Saturday’s race, a modest 59 seconds was Riiber’s head start.

But analyzing times reveals Riiber is still developing as a skier. He skied the 30th fastest time, winning by 13.7 seconds, on Friday. 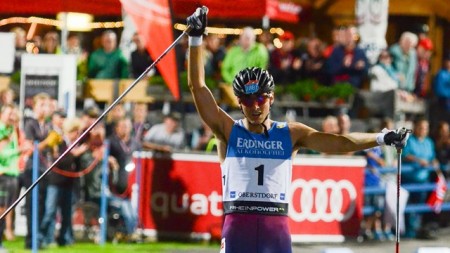 On Day 2, 17.6 seconds was Riiber’s margin of victory. Of the 51 skiers beginning the rollerski portion, Riiber raced only the 36th fastest time on the day. No matter, the young Norwegian prevails.

Second: the U.S. is showing promise in the jumping rounds and Taylor Fletcher has proven the ski shape is good.

On the U.S. side, let’s start with Fletcher. He jumped to 29th on Friday and began the rollerski 2:50 behind Riiber. Six laps later on the 1.75 km course, Fletcher had skied the fourth fastest rollerski leg, moving him up in the standings to 18th.

In a USSA press release, Fletcher made a point that Riiber has changed the jumping game. “The level of jumping is so high right now because of one guy,” Fletcher said. “He is the best jumper in all of Norway and could easily be the top guy on the ski jumping World Cup. That being said, to only start 2:50 behind him is somewhat a success. In the meantime, we are going to continue to jump and work on the technical aspects of jumping to close that gap down.”

FIS has implemented a rule change that places a higher value on overall jumping distance. Instead of the previous 1.5 points earned per meter jumped, now nordic combined jumpers are given 1.8 points per meter jumped. With a phenom jumper like Riiber, that marginal .3 point / m increase adds up. The time back for start position in the ski phase is decided by total points.

U.S. Nordic Combined Head Coach Dave Jarrett told USSA that Riiber is a one-man show racing for margin of victory. “Jarl Riiber is jumping on a very high level. He is splitting the field in every competition. And with the new rules changes, it became solely a race for second and third.”

Fletcher jumped to 35th during Saturday’s competition, flying 113 meters. Again, Fletcher played catch up on the ski. And he did catch up. He skied the third fastest time, strong enough to propel him up the standings to ninth overall (+1:20.8).

The European trip was a good sign for Fletcher as he finished the Grand Prix series ranked 15th despite being disqualified in Villach, Switzerland, the second leg of the series, due to a jump suit violation.

In an email, Fletcher described how he plans to challenge Riiber off the hill. “There are a few things that will allow me to close the gap to the leader which will make me closer to podiums for sure,” Fletcher wrote. “One thing is I can loose some weight for the jumping, which I have been doing. When I do this, I need to be careful that I don’t get too light as it will affect my cross country as I won’t have the same power. Another thing that will help is being more explosive and powerful on the take off, to do this I have been in the gym more this summer and reworking my strength and power programs to do this but its a process and you can’t expect it right away.”

The take away for Fletcher as the colder months approach leaves him optimistic. “I am happy with how the performances were in Europe.” Fletcher explained. “I was jumping at a much better level than last year and I was more in the hunt for the top places. Even though I was jumping better, I still don’t think I had my best jumps but they were still good. The cross country is right where I was expecting it to be and I will continue to progress as the summer and fall moves on! I am excited to get ready for winter as I know where I am in the pecking order and what to expect going into the first competitions of the year.”

Yet both skiers showed moxie off the jump. Loomis jumped to 16th while Berend was a place behind in 17th.

Day 2 proved another solid day off the jumping hill for Berend and Loomis. With 115 points after the jump, Berend’s effort was good enough for the 12th-best jump. Loomis was 10 spots back in 22nd. After the skiing portion, Loomis finished in 33rd, with Berend in 36th. 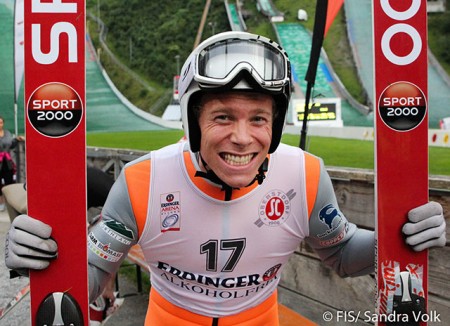 In an email exchange with Berend, he explained the team is positive. “I would say that as a team the sensation is that we are moving in the right direction, Berend wrote. “This offseason we hired an Austrian jump coach Nik Huber. He has really given us a lot of confidence on the jump hill. Taylor showed in Oberwiesenthal that he can fight for a podium on the last lap. If Bryan was here, I truly believe he would have been fighting for the podium as well … The goal is to eventually have a strong enough 4 man team to fight for podiums at World Championship and Olympic Events. I think seeing Ben Loomis and I jumping into the top 20 is a huge step in that direction. It seems everyone is happy with where they are at right now. The next step is improving on that form before the winter.”

With a competitor like Riiber, establishing big time gaps with his jumping, it’s paramount that U.S. skiers like Berend attempt to minimize that gap with improved jumping.

“Throughout the two week Grand Prix Tour I had some of the furthest jumps on the hill,” Berend wrote. “By the time we got to Oberstdorf my confidence was through the roof. It got to the point where I knew I was going to go far even with a bad jump (Saturday’s 17th place was with a bad jump). This took a lot of pressure off of me and I was able to relax and just execute. In the past I have been inconsistent on World Cup. One day I jump to 10th and the next day I would jump to 45th. During the Grand Prix I jumped to 19th, 17th, and 12th. This is definitely the kind of consistency I have been looking for.”