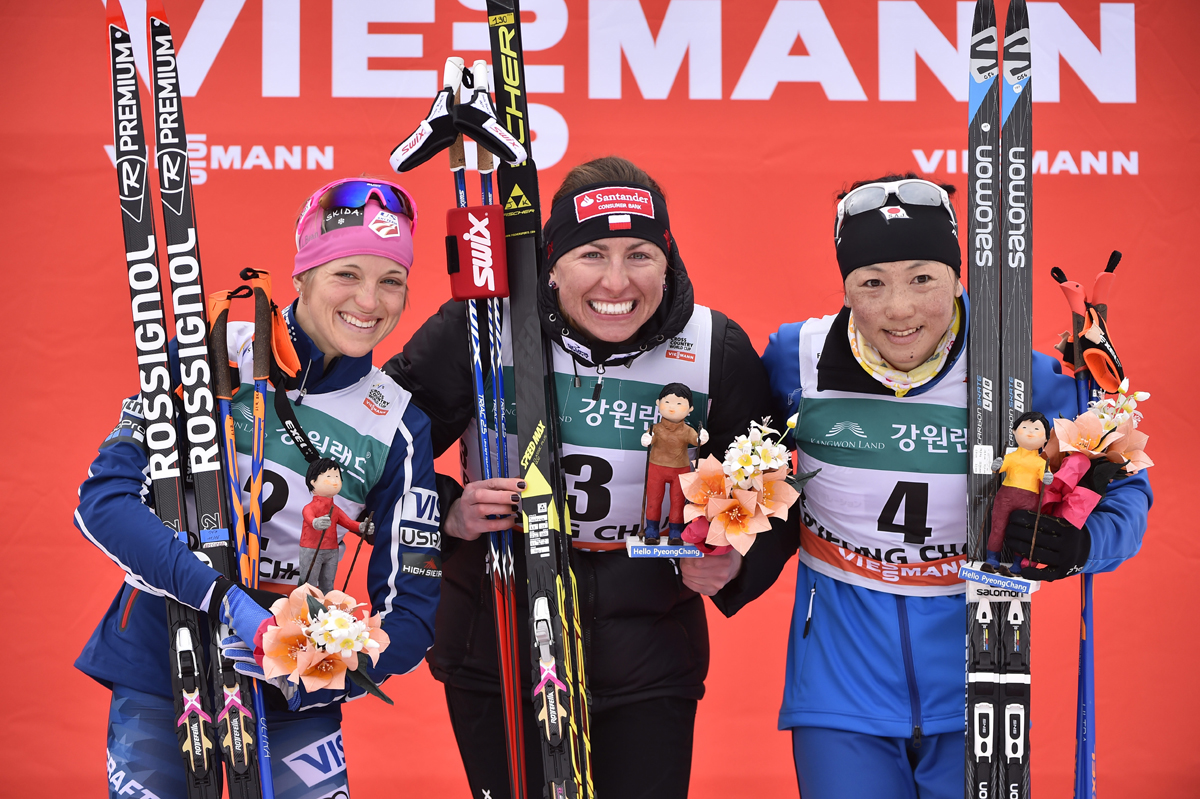 Multiple race warmup and cool downs, managing hydration and caloric intake, moving at her max sprinting speed — more than once. It’s not often that American Liz Stephen feels the lingering effects of a World Cup sprint day. Her most recent memory was three years ago, when she qualified 22nd in Szklarska Poreba, Poland.

But this weekend’s three-day competition series in PyeongChang, South Korea, challenged the distance specialist once again. With a smaller World Cup field than usual, Stephen qualified 29th in Friday’s classic sprint and advanced quarterfinals, where she raced in the first heat of the day.

In what ended up being the fastest women’s quarterfinal, Stephen pushed through Friday’s hill-dominant sprint course and crossed fifth for 25th overall. The back-to-back sprint experience, however, left the 30-year-old Stephen with a little less energy than she would have liked as she entered Saturday’s 15-kilometer skiathlon. 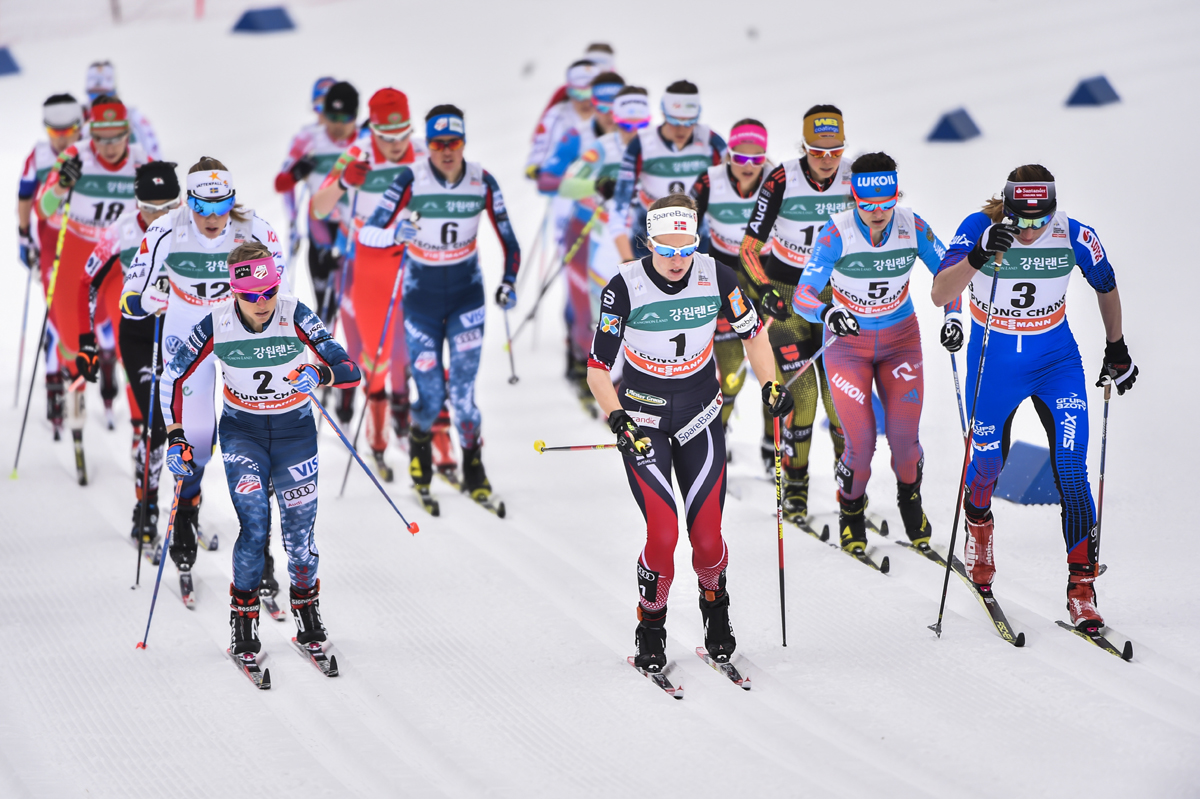 American Liz Stephen (2) skiing at the front of the women’s 15 k skiathlon on Saturday, alongside Norway’s Silje Øyre Slind (1) and Poland’s Justyna Kowalczyk (3), at the World Cup in PyeongChang, South Korea. (Photo: Fischer/NordicFocus)

“I think I was feeling yesterday’s sprint race a bit, as I did twice as many rounds as I usually do!” Stephen joked in an email.

Yet, standing at the start in bib 2, behind Norway’s Silje Øyre Slind in bib 1, Stephen wasn’t going to let a little soreness stop her from racing to Saturday’s skiathlon podium.

After Poland’s Justyna Kowalczyk gapped the front by close to 20 seconds in the first two kilometers of the classic leg, the American held on tight to the lead chase group, striding even with a medley of skiers, including Slind, Japan’s Masako Ishida, Norway’s Anna Svendsen, Sweden’s Maria Nordström, and Germany’s Elisabeth Schicho.

Stephen came through the exchange in fifth position, a little over a minute behind the race leader Kowalczyk and 12 seconds back from the second place skier, Ishida.

“I was afraid I skied little too hard in the classic portion,” Stephen said, according to an International Ski Federation (FIS) press release. “I wanted to stay with the leading group in the classical part not to fall back.”

Skate skis on, Stephen quickly caught and surpassed Svendsen and Schicho by the 8.4 k mark, rejoining Ishida. With over a minute separating her and Ishida from Kowalczyk, the battle for second began. Around the 10 k mark, Stephen made her move. Powering past Masako, Stephen started her second hunt, this time for the Polish skier.

But Kowalczyk’s early classic-leg surge and strong skating staved off any attempts from Stephen.

“Liz was able to take some time out of her, but not significant time,” USST Head Coach Chris Grover said on the phone. “So that was impressive racing by Kowalczyk.” 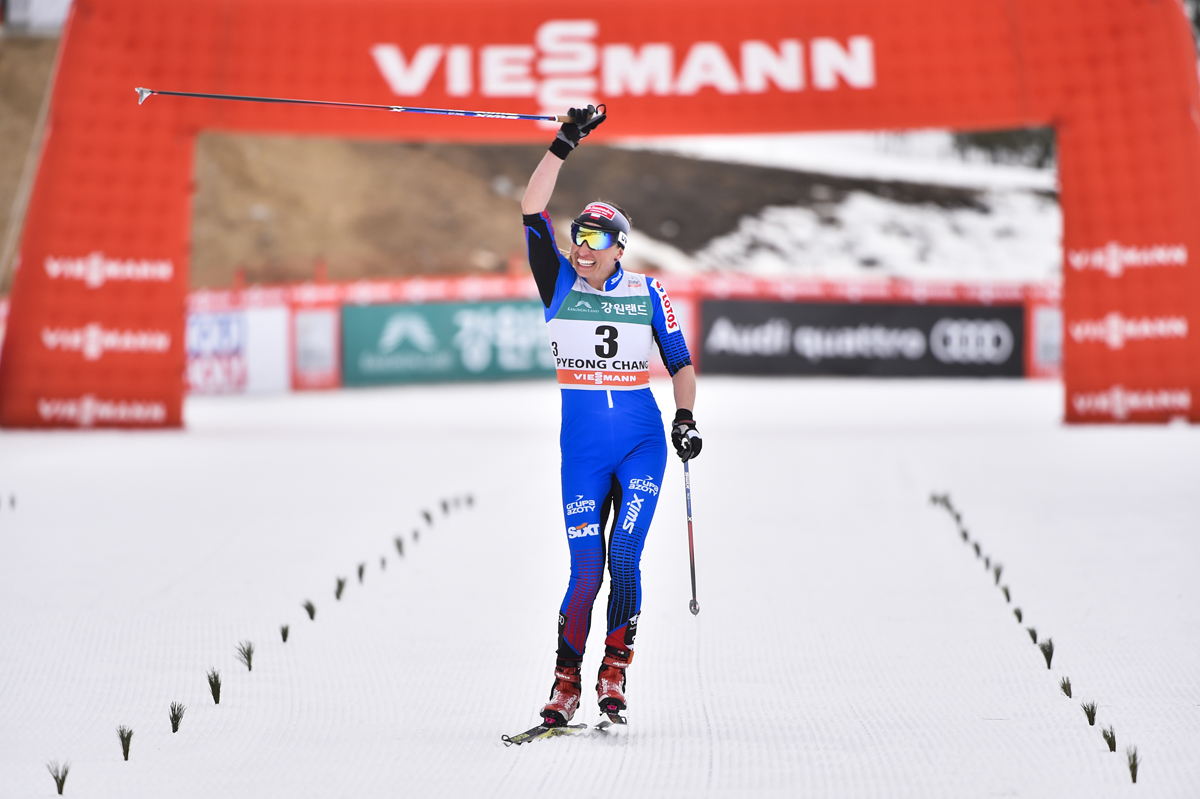 Kowalczyk ultimately finished first for the win in a time of 43:54.7. The victory marked her 50th World Cup win and first individual World Cup victory since 2014.

“It has been a long time since I have been on the World Cup podium,” Kowalczyk said, according to FIS. “I was quite surprised to see how well I skated.”

Finishing exactly 56 seconds behind Kowalczyk was Stephen in second place. The result was Stephen’s best individual result since 2015, when she placed second in the 10 k freestyle race in Rybinsk, Russia.

“It’s hard not to feel happy when you get a podium finish!” she said, according to a U.S. Ski Team press release. “However, I didn’t feel like I had as much energy as I wanted to have today, but it was enough to hold onto second.”

Just missing the podium by 6.6 seconds was American Caitlin Patterson in fourth (+1:21.4). Though a tangle on the first hill of her classic leg pushed Patterson back to 13th, the 27-year-old Craftsbury Green Racing Project skier was able to reconnect with the top 1o by the 2 k mark.

Unconcerned with Kowalczyk’s blistering pace, Patterson focused on the chase pack. By the time she reached the ski change, she was positioned in seventh. Her transition to skate skis smooth and energy still strong, Patterson began to pick people off. 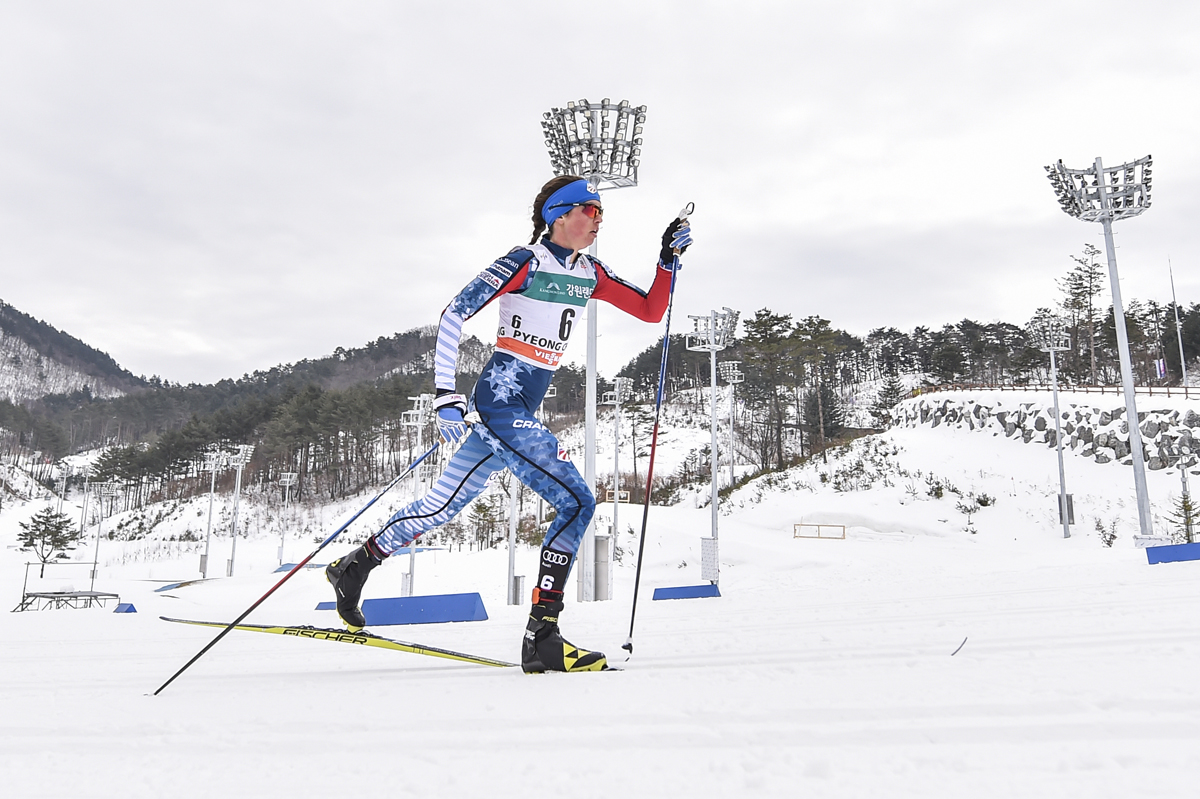 “Caitlin Patterson was really impressive,” Grover said. “She was kind of hovering around seventh or eighth for most of the race, and then really in the last lap, really started to pick people off, including right at the very end to get all the way up to fourth.”

Feeling fairly well adjusted to the time difference, and appreciative of the low-altitude racing, Patterson was proud of her race effort. Her only issue being the seconds that separated her from the podium.

“When I look at the results and see how close third place was ahead of me, I can’t help but wish I could have somehow gone faster sooner!” Patterson wrote in an email. “A true sign of how much this makes me hungry for more, though I know I gave it everything I had out there today.”

The third American woman on Saturday was Liz Guiney in 13th (+2:21.7). The PyeongChang World Cup marks Guiney’s third week of World Cup racing and, while this weekend’s field is not as strong as the ones she recently raced against in Sweden, the result was still a little unexpected for Guiney.

“I’m very happy with my race today!” Guiney, 25, wrote in an email. “With the weaker World Cup field, it was a good opportunity to score some points, but I think I surprised myself by being within reach of the top 10.”

“Last weekend in the Falun 15k, I got a little too excited out of the start and paid for it later in the race, so my goal today was to ski my own race,” Guiney wrote. “I was really psyched to cross the line and find out that Liz Stephen placed 2nd and Caitlin (my GRP teammate) was 4th, which is a big breakout result for her!”

The post Stephen Back on Podium in 2nd, Patterson 4th in PyeongChang Skiathlon appeared first on FasterSkier.com.