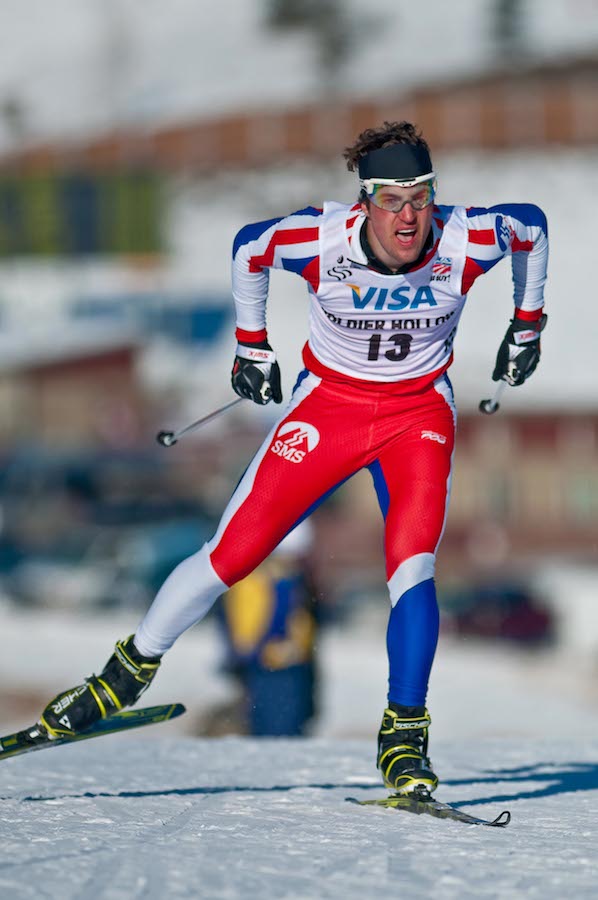 Stratton’s Ben Saxton racing to second in the freestyle sprint at 2014 U.S. nationals in Midway, Utah. Saxton was one of two skiers recently nominated to the U.S. Ski Team’s development “D” team. (Photo: bertboyer.zenfolio.com/Proceeds go to the National Nordic Foundation)

Ben Saxton and Paddy Caldwell are like many Dartmouth College students — smart, young, athletic — but these two 20-year-old nordic skiers have another thing going for them: being part of the U.S. Ski Team (USST).

While the team won’t actually be named until fall, the USST recently nominated Saxton, of Minnesota, and Caldwell, of New Hampshire, to its development, or D-team, which existed two seasons ago with two different men (Erik Bjornsen and Skyler Davis).

USST Head Coach Chris Grover explained on the phone earlier this week that the team was reinstated, so to speak, to capture the talent of two guys that have been on the team’s radar for several years.

“There will be times when our A-team is bigger, B-team is bigger, maybe not have a D-team and hopefully have a bigger D-team,” Grover said of the D-team’s existence. “It needs to depend on when athletes are emerging.”

National-team staff considered a wide range of other talented U.S. skiers for its development team, without any specific quota or male-to-female ratio. Ultimately, they decided Saxton and Caldwell were the top picks. 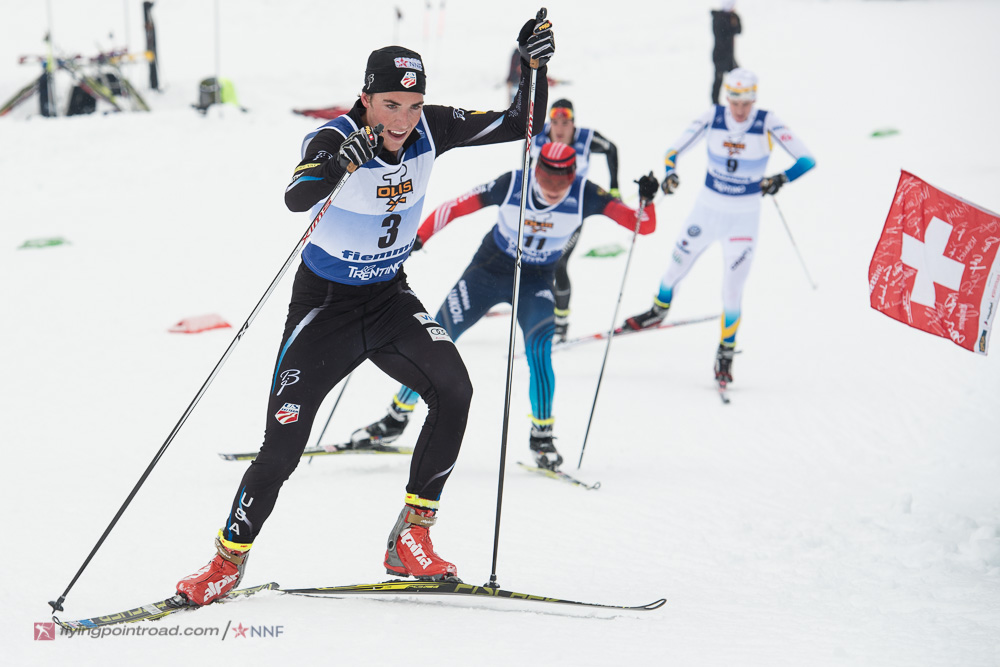 Paddy Caldwell (Dartmouth) racing to 10th in the skiathlon at his first Junior World Championships in February in Val di Fiemme, Italy. (Photo: FlyingPointRoad.com/Proceeds go to the NNF)

Caldwell is also the son of four-time Olympian Tim Caldwell, grandson of 1952 Olympian and former USST head coach John Caldwell, cousin of Sophie Caldwell, who’s currently on the A-team, and nephew of SMS nordic director Sverre Caldwell. He trained with Stratton as a postgrad, and at Junior World Championships last February, he tallied 10th in the 20 k skiathlon — a format juniors don’t often do. He was the top American at 2014 NCAA Championships in the 20 k freestyle mass start (fifth overall), and he won the junior 10 k freestyle mass start at U.S. nationals in January.

“They are on the path right now to potentially being medal-capable seniors down the road,” Grover said. “We wanted to help bridge the gap this year from the NTG [National Training Group].”

While NTG athletes get several opportunities during the offseason to work out with full-fledged USST A- and B-team members — most of which spend the winter overseas on the World Cup — there are some exclusive USST sessions, including testing inside the Center of Excellence (COE) in Park City, Utah. Saxton and Caldwell will now have access to that as D-team members invited to the USST summer camps.

“It’s an unfunded team, first of all,” Grover explained. “There’s no financial resources that we could put toward this. Ideally we would have some resources that we could put towards this. [The] opportunity is joining national team camps … all are open to them. Also, being able to utilize, as Ski Team members, testing facilities and sport science and sports medicine, some of those in-house resources that are reserved for Ski Team athletes. It’s just a minor step between, say, what we’re doing with a National Training Group.”

The two D-team members will have to pay for their own travel, room and board for camps, Grover said. While adding them to the team doesn’t directly impact the USST’s budget, it does put a strain on resources, like coaching.

A few weeks ago, USST men’s assistant Jason Cork called Saxton and Caldwell individually to inform them of the possibility of being named to the team. According to Saxton, Cork asked if they were interested. Both were, but they had a few questions. What would this mean, exactly? Could they continue studying at Dartmouth? What was this going to require from an attendance, performance and financial standpoint?

“I asked [those questions] and got the answer and liked what I heard,” Saxton said on the phone, sounding somewhat sleepy before class on Monday morning. He spent the weekend fielding congratulations and phone calls from friends and family about the news.

“Obviously I was pretty excited about it — it’s a pretty cool opportunity,” he said. “There are a lot of people that are skiing at a level that would warrant being on a team like this.”

After taking a postgrad year training and racing with the Stratton Mountain School (SMS), Saxton is in his freshman spring term with a full load of classes most days of the week. He hasn’t declared a major or narrowed his concentration just yet, but a college education remains high on his priority list — as it does for his family.

“I chose Dartmouth because academics are pretty important to me and my family,” he said.

Caldwell is in his second year at Dartmouth, but technically part of the freshman class with an interest on economics and geography. This coming winter, he could race for the Big Green during the college season in his second season of NCAA eligibility, but he hasn’t pinned down his ideal race schedule yet, or decided whether to take a summer term.

“When I first got the call [about the D-team], it was shocking,” Caldwell said on the phone from Dartmouth’s campus in Hanover, N.H. “Like, ‘Oh man, stuff’s gonna change. This is gonna mean not skiing for Dartmouth,’ but I realize that in the end, this is going to be great opportunity to keep pursuing skiing as best I can.”

The college’s flexible term schedule, which can work around a ski calendar, also appealed to Saxton, He planned to continue taking classes at Dartmouth this summer and said being on the USST D-team wasn’t going to require any drastic changes.

“When I first got the call [about the D-team], it was shocking, like, ‘Oh man, stuff’s gonna change. This is gonna mean not skiing for Dartmouth,’ but I realize that in the end, this is going to be great opportunity to keep pursuing skiing as best I can.” — Paddy Caldwell, on recently being nominated to the U.S. Ski Team’s D-team

Saxton previously decided to forgo his NCAA eligibility when Stratton promoted him to its elite SMST2 Team this spring. Two years after graduating high school (he spent his first postgrad season with F.A.S.T. Performance Training in Wisconsin), Saxton has entered the professional-skiing ranks. He’ll mostly race for Stratton when he’s not in the USST suit at international competitions (i.e. U23 World Championships, one of his goals).

Certain camps remain optional for D-teamers, like the upcoming USST camp in Bend, Ore., from May 19-30. The following USST camp in Anchorage, Alaska, and Eagle Glacier in July will be limited because of capacity restrictions on the glacier, Grover explained. There are spots reserved for A- and B-teams, Alaska Pacific University (APU) elite team, and some foreign training partners, which have yet to publicized (and Grover said he’s usually one of the last to know; A-team veteran Kikkan Randall usually coordinates international invites, and she and her teammates like to keep it a surprise).

The U.S. men’s and women’s camps will be staggered on Eagle Glacier, with the women training there from July 6 to 21, and the men going up July 13-28. The team will not travel to New Zealand this year, as its men’s team had recently in the past.

“We’ve been talking about the Alaska option for a few years,” Grover explained. “The women have had some excellent camps up there the past few summers. Noah [Hoffman] had a great camp up there last year. As a men’s team, we did go to NZ last year but we were actually on the Dachstein Glacier/Oberhof Ski Hall the summer before that. The Snow Farm in New Zealand is an excellent place for a training camp so I know we’ll be back at some point.”

After Alaska, the USST will rendezvous in Lake Placid, N.Y., earlier than usual from Aug. 25-Sept. 8, and train at altitude in Park City from Oct. 7-29.

While neither Saxton nor Caldwell had finalized their school and racing schedules for the coming season, they understood the D-team arrangement as a big opportunity. Saxton said it was the first step of moving up the ladder to the B- or A-teams.

“That’s the more important thing for development skiers: go to camps, international races, train with these guys, and of course all the schwagg,” he said. “We’ll race in the suit a couple of times. The most important thing is it will give us the opportunity to train with those guys and work with the national-team coaches.”

At the same time, Saxton and Caldwell will retain their personal coaches: Saxton with Stratton’s former coach Gus Kaeding and whoever comes on as his replacement at the SMST2 Team, Caldwell with Dartmouth men’s coach Ruff Patterson.

“They should continue to work with coaches they’ve worked with,” Grover said. “Just like any other athlete on the Ski Team, it’s up to them whether they want to work with a personal coach or a U.S. Ski Team coach. They’re really not around the national-team staff for us to have a big impact on them; club coaches, that’s who’s going to see them day to day.”

While Caldwell will have to make some decisions about whether he should focus on college racing or international competitions, Grover said the upcoming U.S. nationals and U23 World Championships should be a focus. There will not be any trials for D-team members to earn World Cup starts — if they want to do that, the best way to do so is lead the SuperTour early in the season. Saxton might strive for that.

“We really want to see them be successful with the level they’re at,” Grover said. “Skiing well at U23s and national championships … successful at Europa cups. Those are the places we need them to be successful at right now.”

In terms of World Cup opportunities, it depends on how well those two are skiing compared to USST A- and B-team members. This winter, the U.S. has a reduced national quota of three men’s sprint spots and four men’s distance per race. The women have five sprint and five distance openings, all of which are based on the team’s performances last season.

“We may award a start spot at a given World Cup based on the kind of fitness we see in camp this summer and fall, and it will be awarded purely on Coaches’ Discretion,” Grover explained.

Regardless, Caldwell and Saxton are hungry. The other piece of the puzzle will be figuring out how to pay for it.

“There might be more travel involved,” Caldwell said. “That’s something I’ll look at more closely. This past winter I was able to go to Europe, which was amazing and go to school at the same time. We made it work, but I got a lot of support from the collage and the team and NNF [National Nordic Foundation] financially, I feel like we’ll make it work in that way.”

After meeting at Junior Nationals a few years ago, Caldwell said he and Saxton have become best friends. They’ve traveled to Europe together, know each other well “and I’m really excited we’re going through this together,” Caldwell said.

“I think we’re definitely going to be leaning on each other at times and that’s a good thing,” Saxton said. “I know that we can count on each other and it’s really nice to have a good friend along for the ride.”