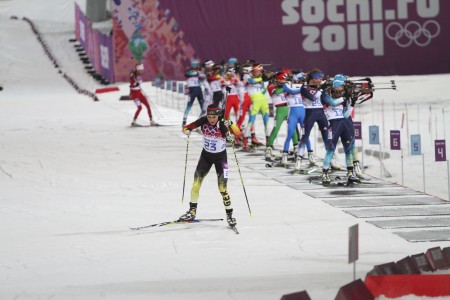 Evi Sachenbacher-Stehle, an Olympic champion in cross-country skiing who took up biathlon last winter, had both her A- and B-samples test positive for the stimulant methylhexanamine.

The German Olympic Committee is sending her home immediately, it said Friday evening.

Methylhexanamine can be found in several supplements, including geranium oil, and the U.S. Anti-Doping Agency has cautioned athletes against accidental ingestion. Multiple athletes in sports like basketball, soccer, and track and field have been slapped with suspensions after accidentally taking the substance, among them Jamaican sprint World Champion Sheri-Ann Brooks.

In a prepared statement provided by the German Ski Association, Sachenbacher-Stehle maintained that she had always confirmed the legality of her nutritional supplements with a laboratory.

“I am experiencing the worst nightmare that one could possibly imagine, because I cannot explain how I have received a positive test,” she said. “All I can do at this moment is assure everyone that I have at no time deliberately taken banned substances, and I will do everything possible to clear up this matter completely.”

Sachenbacher-Stehle is the fourth biathlete to have failed a doping test recently, after the International Biathlon Union in January announced positive tests from a Lithuanian and two Russians.

The German Olympic Committee said that it had been notified of Sachenbacher-Stehle’s positive A-sample on Thursday evening.

Sachenbacher-Stehle was informed around midnight, said Stefan Schwarzbach, a spokesman for the German Ski Association.

Schwarzbach said that the association provides its athletes with a list of approved supplements, and said it was possible that Sachenbacher-Stehle had ingested a contaminated product.

“It really seems that it is a mistake,” he said. “And she has to handle the consequences.”

Under the principle of strict liability, athletes are responsible for banned substances found in their samples regardless of whether they were ingested intentionally or not.

The news of the positive test—bits and pieces of which trickled out throughout the day—cast a pall over athletes, coaches, and officials involved in biathlon and cross-country skiing at the Sochi games.

Many said they were shocked to learn that the athlete involved was Sachenbacher-Stehle. Both biathletes and cross-country skiers described her as a cheerful, positive presence on their circuits—American cross-country skier Kikkan Randall called her “the last person, really, that you would suspect.”

Some said they found Sachenbacher-Stehle’s claims plausible, while others dismissed her denials as typical for an athlete who has been caught red-handed.

“The first line of defense that you always hear, in virtually every possible doping case, is that: ‘It was in my supplement. It was inadvertent,’” said Canadian Beckie Scott, a retired Olympic champion cross-country skier who’s a member of both the International Olympic Committee, and the executive committee of the World Anti-Doping Agency. “I’m a really hardened cynic when it comes to those kinds of defenses.”

But American biathlete Tim Burke, whose girlfriend is Andrea Henkel, another member of the German team, said he was “really shocked” to learn of the positive test.

“I’m sure she’s taking some sort of supplement that had something in it that wasn’t listed on it,” Burke said. “I feel awful for her—she’s a multiple-time Olympic champion, and I’m sure she did that clean. And now, she’s always going to have this stain on her name.”

Sachenbacher-Stehle trains in Rupholding, in southwest Germany, with the country’s national biathlon team.

Her coach is Ricco Gross, a German who won eight Olympic medals in biathlon in the 1990s and 2000s as an athlete.

Gross has ties to the American biathlon team, as Bernd Eisenbichler, the team’s high-performance director, was Gross’s personal ski technician for five years.

Eisenbichler said he found it hard to believe that Gross would have any role in a doping program.

“I cannot see any evidence that he would be involved with that at all. I got to know him as a very hard-working sportsman and athlete,” he said. “But for sure, I don’t know. That’s just my feeling.”

In 2006, Sachenbacher-Stehle was given a five-day suspension for elevated levels of hemoglobin just before the start of the Turin Olympic Games. Hemoglobin is the protein in blood that carries oxygen, and high levels have been associated with doping—though they can also occur naturally.

On Friday, news reports were quick to cite the incident from 2006, but Burke, the American biathlete, noted that Americans, including Randall and another cross-country skier, Leif Zimmerman, were both handed the same five-day ban as Sachenbacher-Stehle.

“And I can guarantee you they weren’t doping,” Burke said. “Everyone reads that and just sees that as a doping violation. But it’s not.”

Burke and Max Cobb, the president of the U.S. Biathlon Association, said they were worried about how the report of Sachenbacher-Stehle’s test would reflect on their sport—which both asserted is predominantly clean.

Cobb said he saw the preliminary details of Sachenbacher’s case as distinct from one in which an athlete had been caught using blood-boosting drugs.

“There’s a big difference between having someone stick a needle in your arm, and eating the wrong sports bar,” he said. “On the other hand, you have millions of people around the world watching the Olympics right now. For many of them, they won’t bother to differentiate between a real case of blood doping, and a case of accidental doping.”

Burke said that the news about Sachenbacher-Stehle had been a challenge for the German women’s team, which includes Henkel, his girlfriend.

“She was just shocked, and she was really confident that it was just a mistake. But that doesn’t stop people from pointing fingers and saying bad things about the entire German team that aren’t true,” he said. “And it just puts biathlon in a negative light—especially for what I think this is, which is just all a big mistake.”