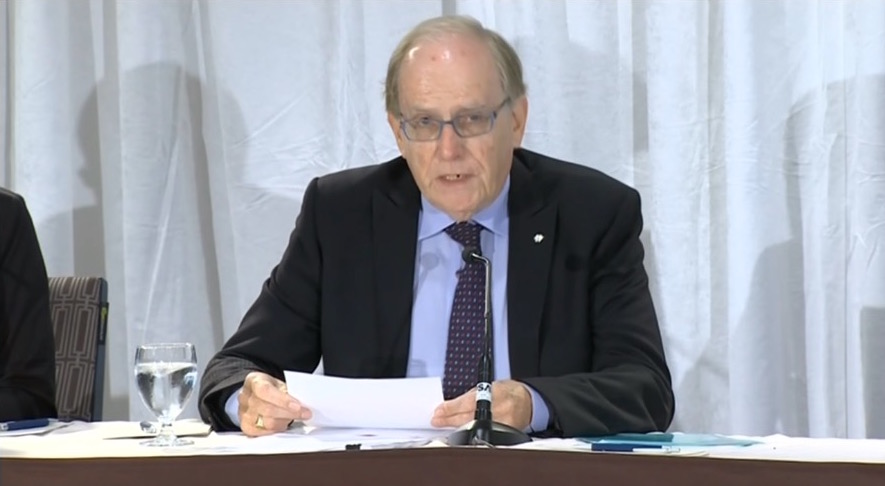 Richard McLaren speaking at a news conference on Monday in Toronto regarding his WADA-commissioned report on state-sponsored doping in Russia.

In a press conference in Toronto on Monday, the long-awaited McLaren report confirmed allegations of state-sponsored doping in Russia.

The World Anti-Doping Agency (WADA) gave Professor Richard McLaren, a Canadian lawyer, a mandate to investigate claims about doping during the Sochi Games in 2014. The report, however, made claims that the system to protect dopers was in place from late 2011 until August 2015.

This confirmed statements by whistleblowers, including Vitaly Stepanov to German broadcaster ARD and Grigoriy Rodchenkov to The New York Times. When the initial allegations were made, they were strenuously denied by Russian officials including those named and identified in the McLaren report as having helmed the doping cover-up.

The 97-page report itself made no recommendations for action, but McLaren said that standards of criminal law were followed and the findings were passed on to relevant authorities. Those findings were severe enough that following the report, the WADA Executive Board met and released a seven-point recommendation including that individual international federations bar all Russian athletes from competing at the 2016 Summer Olympics in Rio de Janeiro, Brazil.

In terms of the report’s basics, here’s what McLaren concludes.

Two labs responsible for anti-doping testing were investigated: the Moscow laboratory and the Sochi laboratory, its “satellite” facility for the 2014 Olympics. Both labs, according to the McLaren Report, were guided by the Ministry of Sport to ensure positive tests were removed and replaced by clean samples. The Ministry of Sport did not act alone. According to McLaren’s findings, it was aided in the cover-up by the Russia’s state security service (FSB).

McLaren described two similar, but distinct, efforts to protect doped Russian athletes. The Moscow laboratory was responsible for ensuring clean samples for both summer and winter Olympic sports. Based near the highest powers of government, “The Moscow Laboratory was the final failsafe protective shield in the State directed doping regime,” the report stated.

McLaren called this lab’s deceptive process the “disappearing positive methodology”. Positive tests were labeled “Save” or “Quarantine”. The “Saved” samples were swapped for clean ones, whereas the “Quarantine” samples were reported as failed drug tests.

The Sochi laboratory helped protect Russian athletes from popping a positive specifically during the 2014 Sochi Olympics. The FSB, Russian Ministry of Sport, and the Moscow laboratory all assisted with planning and executing the sample swapping methodology used during the Games. The Sochi methodology was more complex — tamper-proof bottles were manipulated.

Since their introduction at the 2000 Olympics in Sydney, it was assumed that the bottles could never be opened without showing a mark. But McLaren explained that they had been — small scratches on the bottles remained as proof of manipulation, but the marks were not visible to the naked eye. This confirmed a major allegation by Rodchenkov, which had been met with some skepticism by those who assumed that the bottles were indeed tamper-proof.

Small scratches on the bottles remained as proof of manipulation, but the marks were not visible to the naked eye.

Other claims of Rodchenkov were not fully proven, although also not disproven. Rodchenkov, the former head of the Moscow laboratory, had said that there was a list of pre-approved athletes whose samples would be protected. He named Russian cross-country skier Alexander Legkov as one of them.

McLaren, however, did not mention athletes by name. But he did confirm that there was a “pre-selected” group of Russian athletes that benefitted from the Sochi lab’s clandestine work.

With all of his findings, McLaren made clear he used the threshold of “beyond a reasonable doubt,” when writing the report and substantiating any claims.

According to page 41 of the report, since 2011, Russian winter sports athletes were implicated in the “disappearing positive methodology”: 10 positive tests were rendered clean in biathlon with 13 in “skiing”, although this was not broken down into disciplines such as alpine or cross-country. It should be noted that Russia qualified a small team of alpine skiing athletes for the Sochi Games.

“The findings of the report show a shocking and unprecedented attack on the integrity of sport and on the Olympic Games,” International Olympic Committee (IOC) President Thomas Bach said in a press release. “Therefore, the IOC will not hesitate to take the toughest sanctions available against any individual or organisation implicated.”

International Paralympic Committee (IPC) released a reactionary statement on Monday, quoting its president, Sir Philip Craven: “The IPC will now analyse the report’s findings in detail to evaluate what impact they have on the Paralympic Movement and Para Sport,” he said. “After an initial review of the report, we note the 35 ‘disappearing’ positive samples from Paralympic sport between 2012 and 2015 and have sent a letter to WADA and the report’s author Richard McClaren seeking further information on these samples.  We have also requested urgent clarification from both parties to better establish how the findings implicate the Sochi 2014 Paralympic Winter Games and Russian Para athletes as the report defines the Sochi Games as the XXII Olympic Winter Games…”

The U.S. Olympic Committee (USOC) also weighed in: “The McClaren Report confirms what we have stated previously: the current anti-doping system is broken and urgently requires the attention of everyone interested in protecting clean athletes,” USOC CEO Scott Blackmun said in a press release. “We look forward to working with the IOC, WADA and the entire Olympic family to address the flaws in the current system so that a uniform approach to anti-doping can be implemented and enforced around the world. In the meantime, we are focused on preparing Team USA to compete at the upcoming Rio Games and will rely on the IOC, WADA and the international federations to impose sanctions that are appropriate in relation to the magnitude of these offenses, and that give clean athletes some measure of comfort that they will be competing on a level playing field in Rio.”