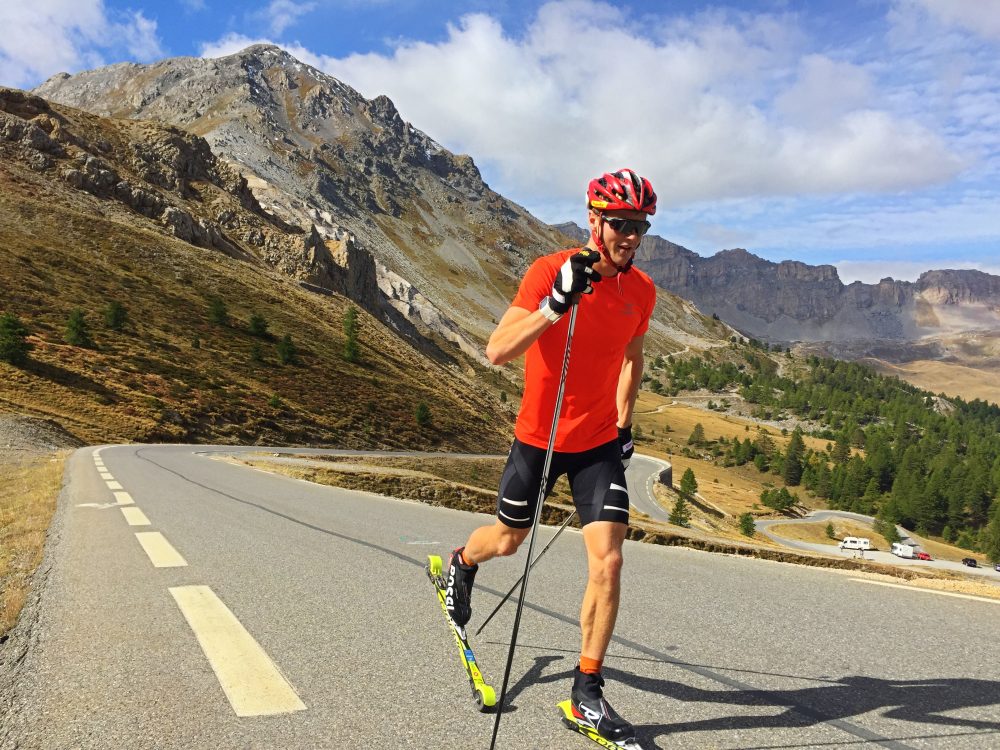 A little less than two months ago, Erik Bjornsen found himself face down, breathing in some combination of medical mattress and bleached bedding. There was a sore tightness in his right shoulder, made all the more difficult to move due to the layers of salved gauze firmly taped to his skin. His training shorts had been modestly rolled down, revealing steak-sized road burns on both of his buns.

Had the U.S. Ski Team (USST) B-team member, by some happenstance, skipped the final rollerski races of the USST’s annual dryland training camp in Park City, Utah, he might have made it through the offseason unscathed for the first time in two years.

The Moirai of Bjornsen’s training, however, had other plans. 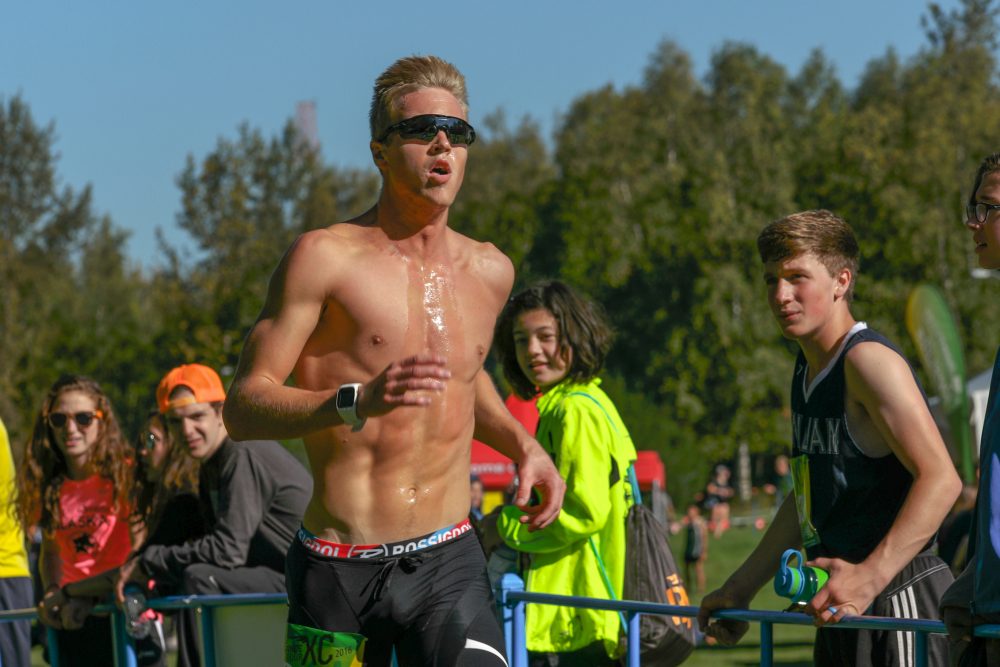 Bjornsen met up with his USST teammates at their Park City training camp, held Oct. 17-31. He competed in the camp’s final time trial: a skate sprint. He qualified for the quarterfinals and started the semis.

But instead of sending it across the finish line, while rounding one of the downhill corners on the sprint rollerski course in Soldier Hollow, he sent himself sliding butt-first across the pebbled pavement.

The incident left the 25 year old with road-rash raspberries on his right shoulder, left hand and total tail-end, as well as a desire to be done skiing on anything but snow, according to one of his Instagram posts after the crash.

But for the Methow, Wash., native — who currently lives in Anchorage, Alaska, and trains with Alaska Pacific University (APU) — a few less skin cells and a little more neosporin is not the worst preseason distress he could have, or has, endured.

“I was lucky, I mean last year I had hand surgery so I was away from using a pole for three months and then the year before I had some knee issues,” Bjornsen said on the phone in early November from Anchorage. “So I feel like I was very lucky to go through the summer without anything too major happening. Right now I’m just trying to heal up my hands from the road rash.”

Still working to heal his hands during the opening World Cup races in Kussamo, Finland (where he finished 42nd in the men’s classic sprint and 41st in the men’s 15-kilometer classic), Bjornsen was not too preoccupied with early season results.

“Both days I was pretty close to making top 30,” Bjornsen wrote in an email after the 15 k.  “Personally this has always been the most difficult weekend of racing on the World Cup for me. That being considered I’m satisfied with my results. There is definitely more to come!”

When Bjornsen says ‘more to come,’ he means not only in events that he considers his forte, such as the distance classic races, but in his relay and sprint performances as well.

“There’s few [15 k classic events] this season and one in Lahti at World Champs, so I’m definitely looking forward to those, “ Bjornsen said on the phone in early November. “Last year I was able to get into the sprint heats twice and I love head to head racing … so definitely a goal is to get back into the heats and experience that a little bit more … We [also] have another couple of relays and I hope that I can throw down a strong leg.”

Bjornsen has already accomplished one of those goals. Earlier this month, he qualified 30th on Day 1 of the World Cup in Lillehammer, Norway, his first time advancing in a World Cup classic sprint. He was eliminated in his quarterfinal, finishing in 24th overall.

“Erik has not qualified for too many sprints, but to qualify specifically in Lillehammer, in the lion’s den is quite impressive,”  USST Women’s Coach Matt Whitcomb said on the phone after the Lillehammer sprint.

Not quite the heats I hoped and dreamed of today, but still one heck of a fun day! Pretty proud of my little/big brother for helping make a Bjornsen sandwich for the heats. #lillehamertour @ebjornsen1991

Although the U.S. men’s ski team was unable to enter a relay team in the first team event of the season, which took place last Sunday in La Clusaz, France, Bjornsen competed in the men’s 15 k mass start on Saturday, where he finished 20th and earned his first World Cup distance skate points.

“The course was littered with broken poles, lots of crashes I mean it was a super high speed tactical course and [Bjornsen] just stayed out of trouble and kept picking people off,” U.S. head coach Chris Grover said on the phone regarding Bjornsen’s performance on Saturday. “He just paced it perfectly.” 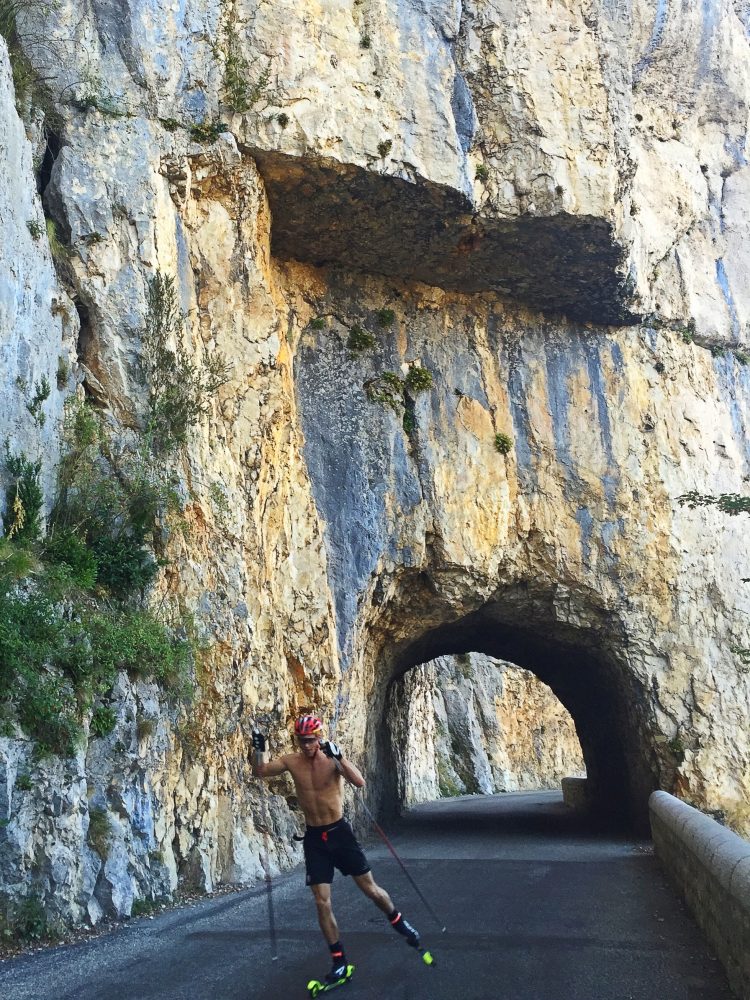 Erik Bjornsen during a rollerski in France this summer. (Courtesy photo)

Though Bjornsen has already witnessed a change in his performances with the conclusion of Period 1, not much had changed with regards to his preseason prep. This includes what has become an annual summer escape to France. Since Bjornsen’s girlfriend of three-and-a-half-years, Marine Dusser (a former French biathlete), lives in Villard, France, taking the opportunity to travel to a different country, train with the likes of Martin Fourcade, Simon Fourcade and Robin Duvillard, and experience a change in training scenery is warmly welcomed.

“This year I didn’t do any of the rollerski races like I’d done in the past,” Bjornsen, who previously raced at French rollerski nationals. “I was able to jump in and train with some strong French guys.”

Beyond buying baguettes and learning a few French phrases here and there while abroad, Bjornsen also spent some time exploring trails at home in Washington, with Sadie and his parents.

“Getting out and running some new trails every day was definitely a highlight to the summer,” Bjornsen said. “It’s always great to go home and visit the family.”

Entering the upcoming season a little tougher and a little rougher, Bjornsen indicates that he he’s ready to hit the road and bounce back, with more burn than ever before.

“I think it’s important for me to keep looking forward,” Bjornsen said. “I know that when the shape does come around, I think I can compete with the best in the world. Hopefully I can time that around world champs, but every weekend is an opportunity.”

Change is hard. I’ve made some subtle changes, but for the most part I’m just trying to perfect what I’ve done the last couple years. Staying injury free has been a huge help.

That’s a hard question. That’s my favorite part of being a cross country skier. We get to travel a lot, and see a lot of amazing places. I spent a few days rollerskiing and running in the southeastern part of France, near the boarder of Italy. That trip was amazing!

Erik Bjornsen during a run in the North Cascade Mountains this summer. (Courtesy photo)

I’ll let you choose one: Camping with good company, hot tubbing in glacier water, getting locked on some fish..

Railroad Man by Anna Lynch. Check it out! I was sitting around a campfire with mostly strangers one night and this girl started playing music. I was pretty impressed so I added her on spotify when I got home and ended up listening to her music a fair amount over the summer… Live music is always the best way to jam!

I usually start with my boots and shoes because they go on the bottom of my bag. Boring, I know. Packing shouldn’t take longer than 30 minutes or your doing something wrong…Sadie….

I don’t feel like I have sacrificed much at all. To be the best in the world thought I think you have to focus a lot on yourself, and sometimes I think you’re forced to make selfish decisions.
I skipped my cousins wedding this summer because it didn’t fit in with my training schedule, sorry Tyler… Luckily I have a very supportive family!

I wish everybody was on a level playing field. Equal resources for everyone and no question whether of not people are doping. Doping is super lame!

Well today is a travel day, so it was a light breakfast. I had toast, cheese, eggs, ham, and a tall glass of raspberry lemonade.

I’ll be splitting my time between my cabin in the Methow Valley and my chalet in France. You can call me on my cell phone, but you’ll probably just get my voice mail.

The post Road Burn Behind Him, Bjornsen Brings On New Season with Heat appeared first on FasterSkier.com.