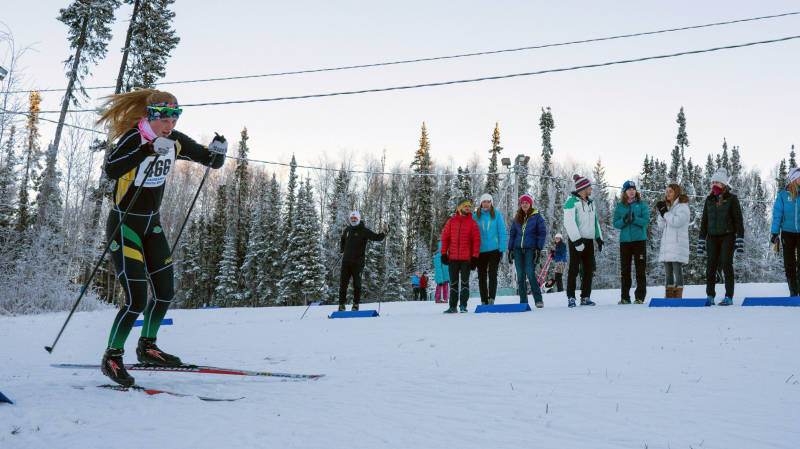 FAIRBANKS, Alaska – Scott Patterson is on a roll. The Alaska Pacific University (APU) skier has now won all of the ski races he entered this year – and over half the ski races held in this country in the 2016/2017 winter to date – after picking up wins on both days of racing in the Alaska Nordic Cup at Birch Hill Ski Area in Fairbanks, Alaska, this past weekend, Nov. 19-20.

Skiers from both universities competed with a new lease on athletic life, after learning earlier this month that the ski programs would not be cut at either UAA or UAF.

The Alaska Nordic Cup is an early season, relatively low-key (but nonetheless International Ski Federation (FIS) sanctioned) competition between Alaska’s only two NCAA nordic programs. Prior to this season, in which UAF switched its conference affiliation from the Central Collegiate Ski Association to the Rocky Mountain Intercollegiate Ski Association (RMISA), it marked the only time outside U.S. nationals that Alaska’s college skiers might compete head to head until, potentially, NCAA Skiing Championships in March.

The Nordic Cup is held each year in November, alternating between the Fairbanks and Anchorage areas. 2016 marked the 13th annual Nordic Cup competition. The UAF Nanooks enjoy a healthy historical advantage over their southern rivals, the UAA Seawolves, entering the weekend with an 8-3-1 all-time record (eight wins, three losses, and one tie) in the first 12 years of the dual meet. Scoring is typically based on an individual race on Saturday plus a relay on Sunday. Lowest combined time wins.

But despite a strong team showing from UAF that carried the Nanooks to victory, and some standout individual performances from UAA, it was APU that owned the top steps of the podium throughout the weekend. 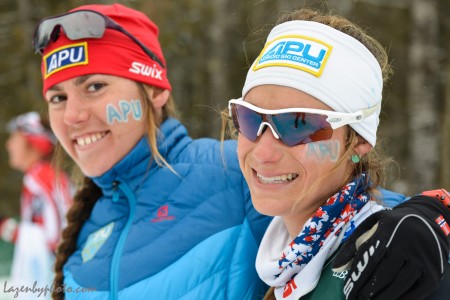 Yeaton appreciated the early season racing opportunity. “It was awesome to race up here on good snow,” she wrote to FasterSkier. Yeaton added, “The conditions were thin but still provided a really good opportunity for a race effort. We are lucky to have these early races to help prepare for the Supertour in a couple weeks – the [Nordic Ski Club of Fairbanks] did a great job making them happen despite the lack of snow!”

Swirbul, a Colorado native, echoed Yeaton’s praise for the venue and host club: “Thanks to Fairbanks for using their limited snow and delivering excellent (all things considered) courses and conditions for us to open our season this past weekend,” she wrote in a Sunday email to FasterSkier.

Swirbul added, reflecting on the sensation of putting on a race bib once more: “As usual, it’s an interesting feeling to return to an on-snow race scene after long summer months without one… nerves, waxing, morning jogs and stretching, race strategy, etc. I sure enjoyed being back at it this weekend! I was satisfied with my and my team’s skiing this weekend, considering it is only November, and think we have great things ahead of us. We are all revving our engines preparing for a long winter ahead, ready to establish a new name for our team with many young skiers, and meanwhile prove to the president of our university that we are more than worthy of being part of a long lasting ski team at UAA! I am very excited for what the season has to bring for UAA.”

Bathe, originally from Madison, Wis., was likewise pleased by the strong first-day showing of the UAF team. “I thought today went well especially for our whole women’s team,” she wrote in an email on Saturday. “To have four women right in there is always awesome and makes us excited for the season! It’s nice to see all the summer training pay off and start getting back into race mode again.”

On the men’s side, the top-seeded Patterson took advantage of his position as the final starter to ski to the victory over several of his APU teammates, including David Norris in second.

“Snow instead of ice made coming to Fairbanks [from Anchorage] for races an easy decision,” Patterson wrote. “Although I hadn’t raced here since high school, I have always enjoyed the Birch Hill trails. During the race, I had to remember how to race a little after getting some early splits that I was even with David and knowing his fitness through the summer and fall. Overall it was a great chance to chase out some early season rust and get ready for important races.” 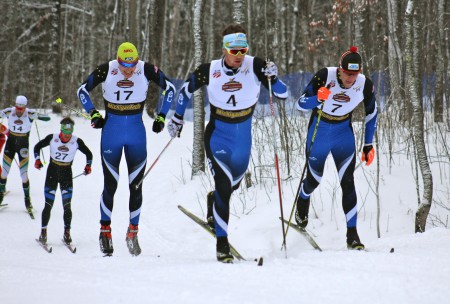 Patterson completed the 8.25 k skate race in 19:36.3. Norris finished 16.7 seconds behind him. Tyler Kornfield rounded out the APU podium, finishing 1:03 back of Patterson.

Patterson and Kornfield grew up in Anchorage. Norris is a Fairbanks native. Their good-natured geographic rivalry stretches back a decade or more, to when they were all competing in Alaska high school skiing. (“We hated the Anchorage guys,” Fairbanks skier Reese Hanneman told the Alaska Dispatch News “with more amusement than venom” in a summer profile. “We were like the rednecks from Fairbanks, out skiing in the woods, going up against the city boys.”)

The top college skier was UAF junior Max Donaldson, another Fairbanks product, in sixth, 1:37 back of Patterson. The top UAA skier was sophomore Toomas Kollo, from Estonia, 2:35 back in ninth.

At the end of the first day of racing, the combined times of the top three UAA women put them just 23.5 seconds behind the top three UAF skiers. On the men’s side, UAF created a larger gap of 2:14.2 over UAA’s combined times, giving UAF an advantage of roughly 2:38 heading into Sunday’s relays.

Sunday saw more of the same: APU took the easy win, Swirbul shined for UAA, and UAF used its depth and balanced performances to take the overall victory.

APU entered only one team in the relay, but it included the top two finishers from each of Saturday’s individual races. Unsurprisingly, the team of Patterson, Rorabaugh, Norris, and Yeaton posted the fastest time in all four legs of the 4 x 4 k skate relay, finishing in 46:57.4. 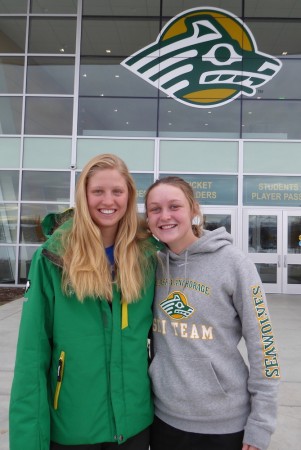 The top college team was Nanooks A (Donaldson, Sarissa Lammers, Michael Fehrenbach, and Bathe), finishing just over three minutes behind APU in 50:10.1. Donaldson and Fehrenbach posted the fastest male collegiate times of the day in their legs. Seawolves ‘A’ (Kollo, Swirbul, Marcus Deuling, and Casey Wright) was less than eight seconds behind the Nanooks in 50:18. Swirbul was again the fastest collegiate woman on the day, while Wright similarly recorded the day’s fastest anchor leg.

Nanooks ‘B’ was next, followed by Seawolves ‘B’. Ultimately, the time gaps from day one grew, and UAF finished with a 4:08 cumulative advantage over UAA, taking home its ninth Nordic Cup overall and second in a row.

UAF nordic coach Nick Crawford said in a Sunday press release, “The Seawolves had a good day today and it was very exciting to watch the race unfold. The margin between our two teams was much smaller today, so it made it that every skier had to race hard which isn’t always the case in relays. The victory was for sure a team effort today with both the men and the women putting together good races. We really enjoy the collaboration we have with our Anchorage rivals.”

UAF skier Anna Darnell expressed similar sentiments, telling the Fairbanks Daily News-Miner, in light of the recent political rollercoaster of threatened cuts to both schools’ ski programs, “We feel a lot closer to the UAA team after this.”

Meanwhile, at the top of the results sheet, Patterson’s brace of victories on the weekend, combined with his easy victory at the Race to the Outhouse #1 outside Palmer, Alaska, earlier this month, meant that the APU skier has now won every single race he has entered this winter, as well as 60 percent of all the ski races held in this country this year. (The Mat-Su Ski Club held a pair of 5 k skate and classic races at Hatcher Pass on Nov. 19 and 20.)

“I’ll have to get a time turner for the coming weekends,” Patterson wrote in an email as he reflected on his current track record, “so I can continue to win every single race in the U.S.”

This particular race was slightly more competitive than the Race to the Outhouse. FasterSkier unofficially calculates the USSA race penalty (a measure of the strength of the field) for Saturday’s men’s race as an impressive 29.03, well below the USSA minimum penalty of 35 for a College Event or Regional Scored Event. (The penalty for the women’s race was unofficially a higher, but still respectable, 60.52.)

Reflecting the cosmopolitan nature of NCAA skiing, competitors in the 45-racer FIS/USSA field hailed from at least eight foreign countries, including Canada, Norway, Germany, Australia, Sweden, the Czech Republic, Italy, and Estonia. They were joined by roughly 200 more skiers in the day’s other races, ranging from kindergartners in snowsuits who skied a 500 meter course without poles to the 60- and 70-year-old age brackets in the community 4 k race.

The strong community support, and college athletes who had finished their race but stayed to cheer on their teammates, combined to make the atmosphere as electric as can be found for American cross-country skiing. Dozens of spectators lined a late-race climb back up to the stadium, where racers were met by an even larger, frenzied crowd cheering them on. 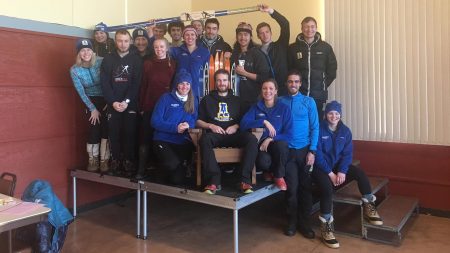 The University of Alaska Fairbanks ski team poses with the trophy for the Alaska Nordic Cup at Birch Hill Ski Area in Fairbanks, Alaska, on Nov. 20, 2016. (Photo: Nick Crawford/UAF Athletics)

Conditions were, as the athletes acknowledged, undeniably snow rather than ice (as on the Anchorage trails these days), but unfortunately not that much of it. Fairbanks has seen approximately five inches of total snowfall so far this winter. The impeccably maintained trails at Birch Hill meant that racers found a base of roughly two inches of compacted snow, with some leaves and sporadic dirt showing through, but no rocks. Most skiers in the FIS race competed on their prior-generation race skis.

Although the official high for the day at the Fairbanks airport was a barely FIS-legal 1° F (-17 degrees Celsius), temperatures at the relatively elevated Birch Hill were comparably temperate, hovering around 10° F (-12 C) throughout the afternoon.

At least in the sunlit stadium. Racing at Birch Hill on clear and cool winter days can be an oddly hellish experience. Not because it is unenjoyable – far from it; the trails are a delight to ski, and the snowy birch forest is sublimely beautiful – but because it evokes the sensation of voyaging into the underworld and back again. The stadium is in the sun, and elevated, and relatively warm; many trails drop down leaving the stadium, sending the skier into the realm of dark and cold. And so one goes from light to dark, sun to shade, warmth to cold, and back again with each new trail, the stadium become a modern-day Cumae (entrance to the underworld in classical mythology) and the skier Heracles or Odysseus, re-enacting the journey between worlds.

RMISA college racing resumes early next year with the Utah Invitational at Soldier Hollow on Jan. 7.