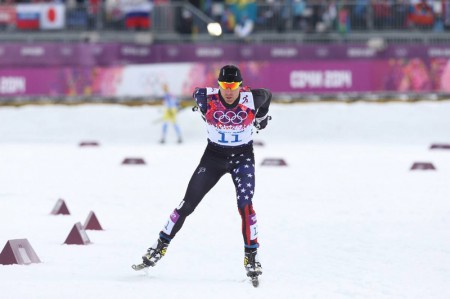 Andy Newell in qualification for the individual sprint on Tuesday. After a tough leg of the 4 x 10 k relay, Newell says he is sick, and is no longer part of the American pairing for Wednesday’s team sprint.

KRASNAYA POLYANA, Russia – Andy Newell is out and Kikkan Randall is in for Wednesday’s team sprint competition at the Olympics.

Newell is sick—“stuffed up and coughing,” said U.S. Ski Team Head Coach Chris Grover—which helps explain why the American sprinter suffered badly through the last two kilometers of racing in last weekend’s relay, before collapsing at the finish.

Erik Bjornsen will replace Newell on Wednesday, anchoring the two-man American team, which will have Simi Hamilton skiing the scramble leg.

Randall has struggled in both of her events in Sochi—the freestyle sprint last week, and the women’s relay on Saturday.

But the American coaches nonetheless selected her for the team sprint, which will be held in the classical technique, based on her track record—she’s the two-time defending World Cup sprint champion—and her appearance in training sessions over the last few days, according to Grover.

“She’s feeling good, and looks good in training, (and) she obviously brings the most experience to our team,” Grover said, adding that Randall’s club coach, Erik Flora, “has been skiing with Kikkan the last few days, and he’s feeling real confident about where she is right now.”

In an email Tuesday, Randall said that she is “looking forward to tomorrow’s race.”

“My energy feels good, and my classic skiing was solid the other day,” she said. “Each race is feeling a little bit better.  The team sprint format has been a good one for me, and it will be great to get another shot at some head-to-head skiing.”

The discussion about the women’s team among the American coaches, Grover said, consumed “an hour and a half or longer” on Monday night.

The U.S. women are considered an outside shot at a medal; Randall and Jessie Diggins won gold at the event at World Championships last year, but that was in freestyle technique.

The Americans have never made the podium in a classic technique team sprint.

There were several candidates for the team for Tuesday’s race, according to Grover, including Sadie Bjornsen and Ida Sargent.

Bjornsen skied the 7th-fastest time of her relay leg last weekend, compared to Randall’s leg, which was the 12th-fastest.

Sargent’s specialty is classic sprinting, and while she didn’t race the relay, she placed one spot behind Randall in the freestyle sprint last week.

Bjornsen and Sargent raced together in the World Cup team sprint in Sochi last year—a test event for the Olympics—and placed fifth.

Grover said that “we can’t really get any better information” than the assessment of Randall’s fitness by Flora, her coach.

Asked whether Flora’s observations could be expected to be objective, Grover pointed out that Flora also coaches Bjornsen.

“He’s somebody that we can trust in tough situations, on tough picks,” Grover said.

The decision, he added, was painstaking.

“You make a choice based on what you feel is the best information you have, and you walk away knowing that it can be a wrong decision,” he said. “You put together what looks like your best team on paper, but there’s lingering doubts in your mind that you could have missed somebody who’s really having one.”

However, Grover added, it’s exciting for the Americans to be in such a competitive position—where their choices could conceivably have an impact on whether the team wins a medal, or not.

“It’s actually nice to be in the situation where you have such hard decisions, that can be so impactful,” he said.

As for the men, Grover said that Torin Koos, who last month won the U.S. national championship in the freestyle sprint, will be the alternate for the team.

That was in Italy in December, where Koos paired with Mike Sinnott, and the two finished 15th of the 15 teams in their semifinal round.

“We just like the way Erik’s been skiing,” Grover said, adding that the challenging nature of the Sochi sprint course favored Bjornsen, who has been racing well in longer events this season.