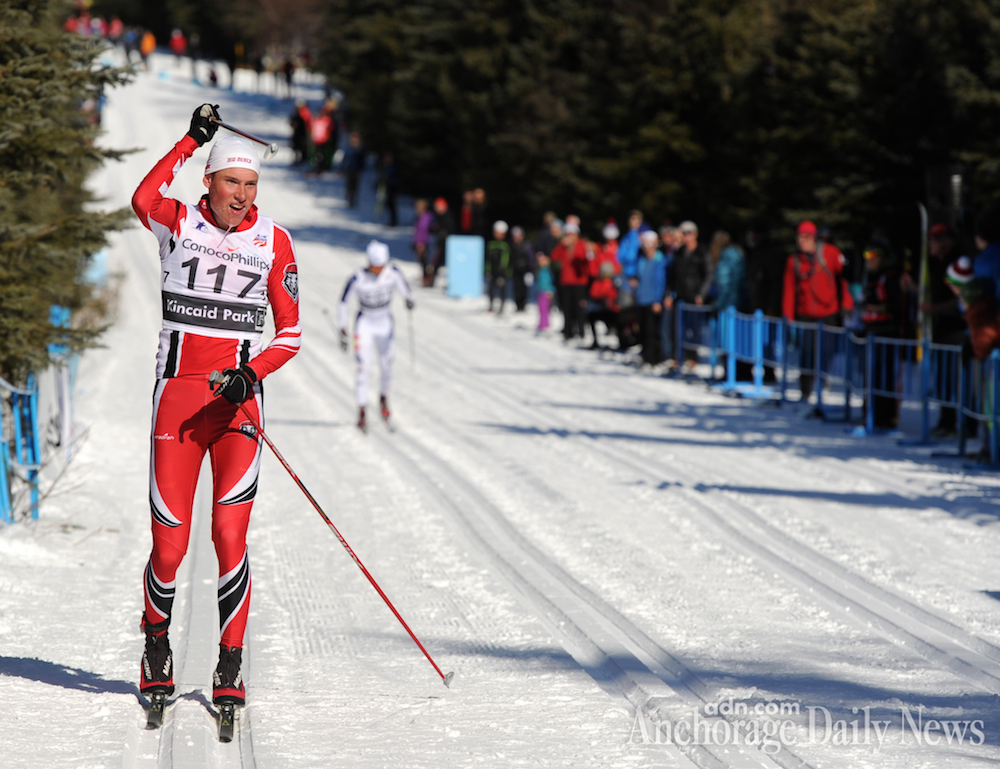 ANCHORAGE, Alaska — Aku Nikander was somewhat a mystery in the men’s 50-kilometer classic mass start on Friday in the last race of the season at U.S. Distance Nationals.

As far as Noah Hoffman of the U.S. Ski Team (USST), Ski & Snowboard Club Vail and Team HomeGrown was concerned, he was the guy that stood between him and a shot at his second-individual victory of 2014 Spring Series.

For Nikander, a Finnish student in his first year at the University of New Mexico, a win is a win, no matter what country you’re racing in, and it’s what he wanted.

It wasn’t until the second of five 10-k loops on the challenging Spencer Loop at Hillside trails that Nikander, a 24-year-old sophomore, emerged as a noticeable contender. Erik Bjornsen, of Alaska Pacific University (APU) and the USST, led through the 10 k checkpoint. Nikander was 2.4 seconds back in 12th, and one lap later, he was up to third, less than two seconds behind leader Reese Hanneman (APU) and Hoffman.

Finnish skier Aku Nikander (r) of the University of New Mexico leads Noah Hoffman of the U.S. Ski Team around a corner on the Spencer Loop during the final lap of the men’s 50 k classic race at the U.S. Distance Nationals at Hillside in Anchorage, Alaska. (Photo: Erik Hill/Anchorage Daily News)

With a 16-second gap to fourth place, Nikander began to ramp up the pace, while Hanneman and Hoffman wondered who exactly he was.

“There’s always those wildcard Europeans at these last races of the year,” Hanneman said with a laugh. “Clearly going into lap three it was just us three and it sounded like we had a pretty decent gap, so I knew, he wouldn’t have been up there if he wasn’t a good skier with good skis and feeling good. I don’t know anything about him, but obviously he’s in contention for the win.”

Earlier this season, Nikander won a college race in Utah in a 30 k skate.

“After that I was struggling,” Nikander said. “I was a little bit overtrained because we had been training in the 3,000 meters so I was so tired the whole season practically. I didn’t do so well in NCAA’s so I was really looking forward to this race.”

He applied to Utah, but then New Mexico head coach Fredrik Landstedt contacted him.

“I knew a couple Finnish alpiners so I decided to go there,” Nikander said. “It’s a little bit deeper than Finland so I wanted to experience something else. It has worked this season pretty well.”

One lap earlier, Gregg had raced to the top of the high point of the course, known as Wall Street, to nab the first of two $ 100-dollar primes at 16 k, but he said the effort cost him. Bjornsen had followed him closely in second, going out hard early in an effort to break up the pack, and Hoffman crested the top with them with a slight gap to Hanneman, Newell and Fehrenbach.

“Most of our training we did on the Spencer Loop,” he explained. “We’d do three loops, maybe one time we did four, so I’ve never done five so that was pretty hard.”

On Friday, he saw his college coach Trond Flagstad at the top of the same climb.

“I got a little fired up, I went for that first prime,” Gregg said. “I was a little tired when the other guys sort of separated so I wasn’t able to quite hang with those guys.”

By 26 k, Nikander was first to the top for the second $ 100 bonus. Hoffman was once again right there with him, and Hanneman a few seconds behind by the summit. Norris led the chase with Fehrenbach, Gregg, and University of Vermont (UVM) senior Scott Patterson, while Newell skied slightly behind in eighth.

“After two laps, I was pretty comfortable,” Nikander said. “We took off with Hoffman and Hanneman. After the uphill sprint we got a gap and I had such good skis.”

Hoffman was glad it broke up by the halfway point.

“I didn’t really know anything about Aku, I didn’t even know his name,” he said. “He’s a good skier.” 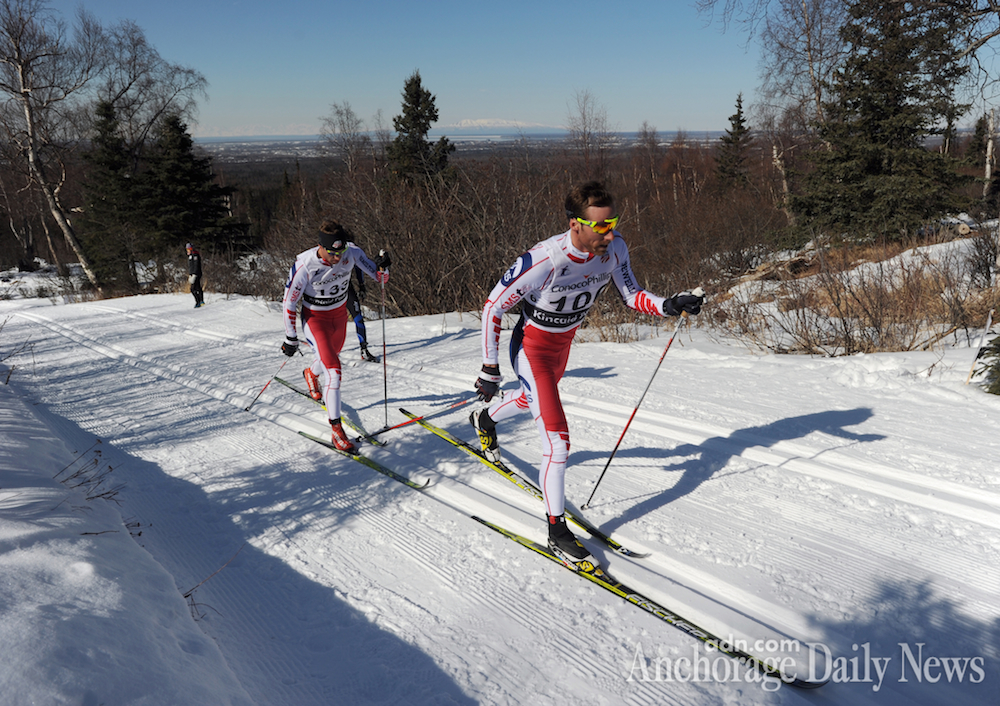 By the time the leaders reached 30 k, Hoffman led Nikander by 0.5 seconds, and Hanneman was nearly 28 seconds behind in third. He still had nearly a minute separating him from fourth, however, with Patterson leading Fehrenbach, Gregg and Norris. Newell was another 28 seconds behind in eighth, followed by teammate Simi Hamilton (SMST2/USST) and Lex Treinen (APU), respectively.

The order of the front three stayed the same through the fourth ascent of Wall Street, with Hoffman and Nikander skiing to the top together and Hannemen trailing by about 40 seconds. Gregg led the chase, with Fehrenbach and Norris, and Hamilton was at the front of the second group with Newell and Treinen over the top.

With one 10 k lap to go, Nikander and Hoffman skied through flatter section of the course as a unit, 48 seconds ahead of Hanneman. The two began to study each other more carefully.

“I just double poled faster than him,” Nikander said. “I was actually leading a lot in the last lap. I had maybe better kick and better glide.”

Neither of Nikander nor Hoffman re-waxed in a race that didn’t allow ski changes.

“I don’t like my chances coming into the final stretch, but part of me was just glad to be with him,” Hoffman said. “I did try a little bit over the final hills, but I just didn’t have a chance getting away from him.”

Nikander took charge the last time up Wall Street and gapped Hoffman before he caught back up on the backside of the course. With an efficient double pole, Nikander was able to stay ahead, entering the finishing straight almost even with Hoffman.

There, he unleashed the double pole he had been banking on, passing Hoffman in the last 150 meters. Hoffman strided into the gradual-uphill finish in second, accepting the race for what it was and the effort he’d put toward it.

“When I saw that Noah can’t keep up in the flat part, in the double-poling part in the last loop I just waited for the final straight and sprint and it was enough for the day,” Nikander said.

“He was better than me double poling all day,” Hoffman said. “I was struggling and it’s a been long season and he was impressive and I’m glad to be done. … Rarely does the best guy not win in a 50 k. I think execution, which I struggle with day in and day out to really perform the way I want to perform, is easier in a longer race for me.

“It doesn’t define my season,” he added. “I’m excited to take a break and excited to look to improve for next year.”

Nikander was excited, although unsure what it would mean to those back home.

“I don’t know how much they are looking at the results from here. We’ll see,” he said. “I think it can help a little bit for [team selection] and next summer’s training camps. I hope so.” 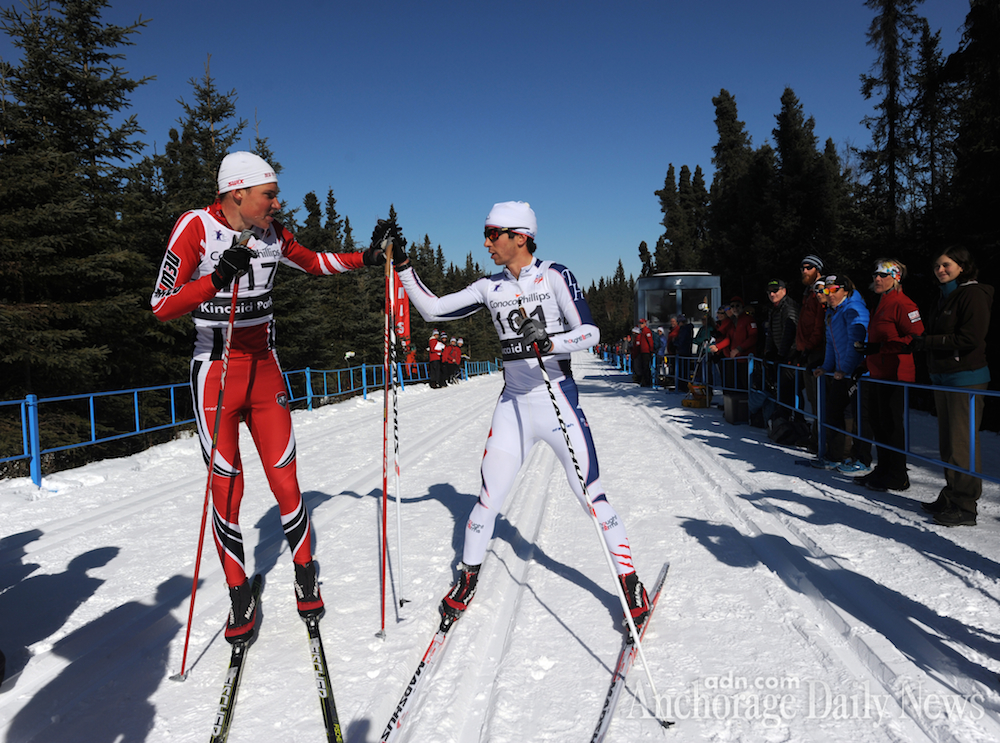 The first American, Hoffman finished 9 seconds after Nikander, who won the roughly 51.5 k race in 2:23.08.3. Hanneman locked up third, 1:01.6 behind Nikander. It was his second podium in three individual races this week, and third including a win in the mixed relay.

“My last two laps, I tried to ski that climb sort of relaxed, just my own pace and not worry how I thought someone else would be skiing it and then try to ski pretty hard on the rest of this stuff,” Hanneman explained.

“You kind of come into the last week and for the most part have no idea how it’s gonna go. I knew I felt good at the World Cup last week … and I ended up feeling decently good,” the overall men’s SuperTour leader said. It’s been really fun to do well here at home. “It’s hard to beat doing well at home. That was a great way, a little reward at the end of the season.”

“Last lap, that’s where I tried to make a move to separate from our little pack,” he said after making his move over the top over Wall Street. “I looked back at the corner. I saw Newell, Simi must’ve been there, too — those guys had just caught us and I was like, it’s time to go. I love that downhill we used to do downhill time trials down that from the very top to the bottom. … Those workouts that we did eight, nine years ago really played into this race course.”

One of the APU skiers that train in Anchorage year-round, Treinen came into the stadium with Newell, then stepped around him at the beginning of the finishing lanes with about 200 meters to go. He out-double poled the Olympic sprinter by 3.1 seconds to finish fifth. Newell placed sixth and Hamilton finished another 11 seconds back in seventh. Norris placed eighth — 13.4 seconds behind Hamilton and 14 seconds ahead of Patterson in ninth, and Fehrenbach was another 27 seconds back in 10th.