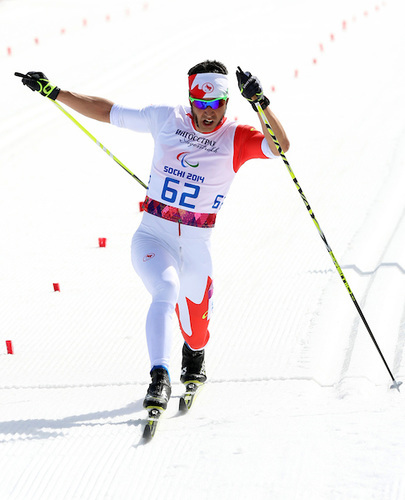 SOCHI, Russia — Brian McKeever cracked Canada’s golden goose egg in the medal count at the Paralympic Winter Games in Sochi, Russia on Monday, and he did it with a unique twist.

One of the most accomplished athletes in the history of Paralympic sport, the 34-year-old McKeever utilized both of his training partners and guides, Erik Carleton and Graham Nishikawa, in the 20-kilometre classic-ski race to slog through the summer-like warm and slow snow conditions and put one in the win column for Canada. The Canadian trio teamed up to clock a winning time of 52 minutes, 37.1 seconds. 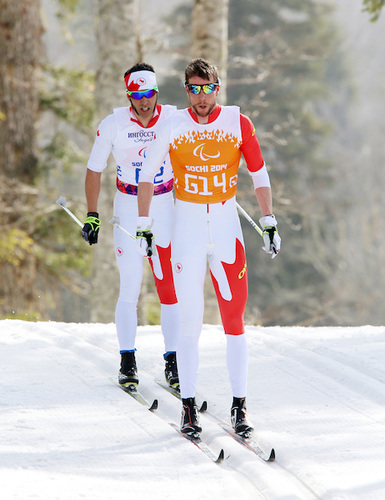 “Today was a huge team effort having two guides out there sharing the work,” said McKeever, 34. “It was definitely needed because I couldn’t have done that on my own. They set the perfect pace with the snow being what it was. It is much faster skiing from behind in conditions like this, and unfortunately for the guides, they are forced to work pretty damn hard. It was all them today!”

Russia’s Stanislav Chokhlaev skied to the silver medal at 53:43.3, while Sweden’s Zebastian Modin grabbed the bronze with a time of 56:34.9.

Watching many of the world’s best Nordic nations struggle with the difficult warm weather and snow conditions at the Olympics and Paralympics in Sochi, the decision to leverage both of the guides that McKeever brought to these Paralympics – the first time he has done so in his legendary career – was made last night during a team meeting.

“It was a convoluted plan and a risky plan that was needed to be done only because of the strength of the athlete,” said 40-year-old Robin McKeever, head coach of the Canada’s Para-Nordic Team who guided his brother to his previous 10 Paralympic medals. “Guiding in these conditions is brutal, and when you are leading a world class athlete like Brian it is very difficult to keep the pace he needs.

“Brian controls the throttle. The risk bringing an athlete in mid-race is he can potentially go out to hard and blow himself up, or he goes to hard and wrecks Brian. Communication is absolutely critical all day between each of the athletes and coaches.

“As the talent of the athletes continue to evolve at the Paralympics I think we are going to see more of this type of strategy because it is so hard to stay out in front of them, and for the guides to continue keeping the pace they need to win.”

The strategy definitely seemed to pay off. With the original race plan to switch guides at the 12-kilometre mark, the Canadians were dropping further back into second place at the mid-way point of the race as the 36-year-old Erik Carleton was running out of gas. 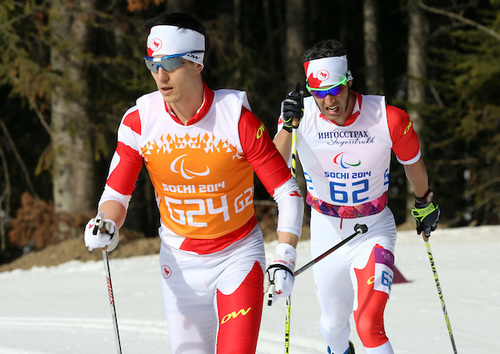 “I started steady and tried to build from there, but was getting tired setting the pace we were at so it was good we made the switch because I did all I could do today,” said Carleton. “It is tough to guide a guy as fast as Brian, but I’m happy we got it done today.”

Childhood buddies, Carleton and McKeever teamed up following the 2010 Paralympics when Brian’s brother Robin packed in his racing career to focus on coaching Canada’s Para-Nordic squad. Recognizing the advantage of having additional arsenal in the wax room, the two Canmore, Alta. natives invited National Ski Team member, Graham Nishikawa, into their training group this fall with the goal of bringing both guides to the Paralympics.

While Nishikawa continued to race able-bodied both domestically in Canada and on the World Cup circuit this year, he remained committed to McKeever at the Paralympics.

“This is not only my first Paralympics, but my first time guiding Brian today so it is a whole new world for me,” said Nishikawa, who was on Canada’s World Championship team last year and raced last the World Cup in Lahti, Finland, last week. “I’m very excited to be here for Brian. It is a tough job to lead him out there. He is a world-class athlete, and we have to set a very fast pace to be out in front of him to deliver the performance.”

Similar to a relief pitcher getting the call from the bullpen, the elder McKeever gave the Whitehorse native the nod to charge to the stadium at the midway point of the race and power Canada to gold. 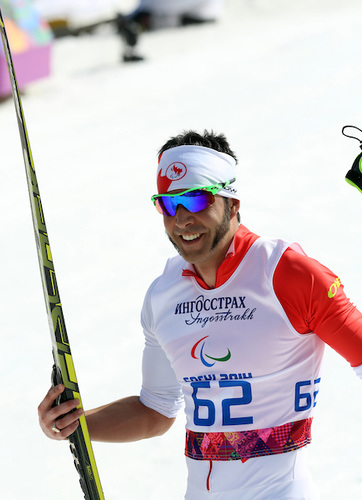 Canadian Brian Mckeever after winning the cross-country mens 20 k visually impaired classic race at the Sochi 2014 Paralympic Winter Games in Sochi, Russia. It was McKeever’s first gold of the Games and eighth in his career. (Photo Scott Grant/Canadian Paralympic Committee)

Two medals – three athletes – begs the question of which guide gets the hardware. It was Carleton’s name on the start list so he and McKeever will receive Canada’s first gold medals at a ceremony on Tuesday evening.

“Having a medal doesn’t matter at all to me,” said Nishikawa. “I was just here for Brian and I’m so happy we got the job done. Nothing can beat that. It is all I could ask for.”

The victory brings McKeever’s medal haul to 11 at the Paralympics, including eight gold.

If he can chalk up two more victories in his other races this week, McKeever will become the first Canadian Winter Paralympian with at least 10 gold medals.

“This one might be one of the most special,” said McKeever. “Just having both of these guys who have been very good friends of mine for a long time, sharing the work, it is pretty special.” 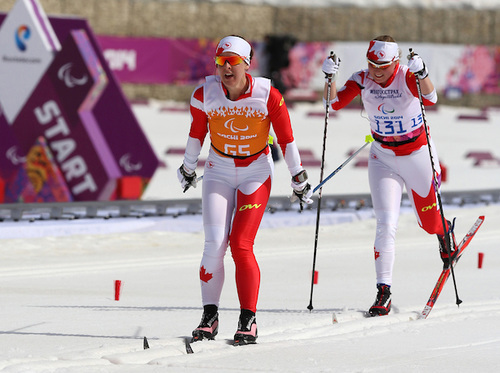