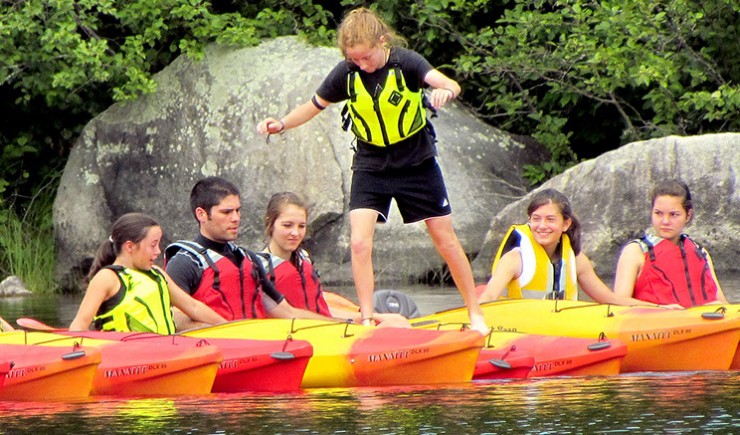 Sometimes change is due to a slow drip, other times it’s a tsunami.

In July, Andy Shepard, founder and president of the nonprofit Maine Winter Sports Center (MWSC), announced a name change. MWSC was rebranding as the Outdoor Sport Institute (OSI). Although the new name is without its homegrown “Maine” roots, OSI will remain very Maine-centric.

OSI Program Director Mike Smith explained in a phone interview that OSI’s name change was the result of the slow-drip kind of change. Smith has worked for the MWSC since 2009. He began as a community development coach, was promoted to community development director, and in the spring of 2014, became program director and chief operating officer (COO).

“The evolution that is being seen now is really an evolution that started years ago and especially about two years ago — we started going through some big changes,” Smith said. “And now the name and brand change is reflecting the things that already started to evolve several years ago and that we have been working on. We reached the point where it really became necessary to update the name to better reflect everything we were doing.”

The changes Smith spoke about are twofold. First, MWSC lost major funding back in April 2014. That was the tsunami type of change. But almost immediately, the center began trying to raise money. Shepard spearheaded a fundraising campaign with seed money from Mary Barton Smith, a Presque Isle, Maine, native and philanthropist. Barton Smith (no relation to Mike Smith) also pledged to match significant dollars to an ongoing $ 20-million endowment campaign — in a recent Mainebiz article, Shepard said Barton Smith’s contribution could be upwards of $ 8 million, as the endowment process continues to build momentum.

OSI will support junior-level biathlete development as well as biathletes in its gap-year program. (Photo: OSI)

The second aspect of MWSC’s change, also precipitated by funding limitations, is something that intially alarmed the U.S. nordic community. In the past, a select group of emerging and national-team biathletes and cross-country skiers could count on some financial, housing and logistical support from MWSC.

“We recognized a couple years ago that the current model of ski clubs in the U.S. was not one that I think where we are going to be strongest,” Mike Smith said. “We wanted to focus more on juniors, more on developing kids at that youth and high-school level up through and into their post-high-school careers since we simply don’t have the funding to support athletes for three to four — five years into their adult career … I know a concern in the cross-country world has been, ‘Oh now we are losing this program and we don’t care about competition.’ I would just reiterate that that is definitely not the case. We have moved ourself out of the same category as an APU [Alaska Pacific University] and Sun Valley Ski team, but we are connected as ever to the ideas of outdoor sport and what you can do with it. I think big picture, what we can offer in competitive sport will grow beyond nordic sport, but it will continue with nordic sport.”

At this point, OSI will not attempt to challenge the Stratton Mountain School (SMS) T2 elite teams of the world. But according to Smith, those initials — OSI — will have a lasting imprint on the future of Maine as both the state’s rural communities and OSI define their new possibilities.

Simply put, the institute is a four-season organization.

Winter may be last seemingly forever in Maine, but the earth spins and spring and summer inevitably come. For the past few years, under the MWSC banner, and now OSI, the organization branched out beyond winter sport.

“We have moved ourself out the same category as an APU [Alaska Pacific University] and Sun Valley Ski team, but we are connected as ever to the ideas of outdoor sport.” — Mike Smith, OSI program director and chief operating officer

Since its inception in 1999, MWSC’s core mission was to provide wellness opportunities through sport for some of Maine’s most rural and economically depressed communities. Beyond the nordic sports, primarily biathlon and cross-country skiing, OSI will offer resources and classes in whitewater kayaking, trail running, stand-up paddling, and mountain biking — activities MWSC had already begun offering.

“The mission of the Maine Winter Sports Center was originally based on using skiing to create a model of sustainability for rural communities in northern Maine,” Shepard explained in an interview with Mainebiz. “That model included an economic development component based on the building of Nordic venues and redevelopment of alpine ski areas, as well as a full range of programs intended to empower kids through a world-class curriculum of outdoor sport education. Over the years, paddle sports, mountain biking, hiking and climbing were added and our scope became statewide.”

Yet bringing opportunities to a vast region mandated a rethinking of how the nonprofit was organized. Smith explained that OSI is decentralized despite MWSC’s name being historically linked with nordic facilities in Fort Kent and Presque Isle.

“Here in Maine you talk to people about Maine Winter Sports Center and they assume that you are talking about a specific facility and specific facility in a specific town which isn’t the case,” Smith said of how OSI will branch out in the state. “We don’t own those nordic venues in Fort Kent and Presque Isle. We still work with them and we have athletes training there, but those facilities are managed by local nonprofit organizations. And we felt it was important that people recognize that and don’t assume that those places are ours and that we are taking care of them because those folks are looking for support as well.”

For now, although he is on the road most days, Smith’s office is based in Caribou, Maine, just north of Presque Isle at the northeastern tip of the state. Shepard, OSI’s CEO, keeps his office at the other end of Maine, nearly 300 miles south in Freeport. OSI maintains its adventure director in western Maine, development directors in the mid-coast region, its head biathlon coach in Fort Kent, and a head nordic coach positioned in southern Aroostook County. Mid-state, OSI stores its equipment and trailers to more efficiently deliver gear to communities engaging in its programs.

With its tentacles throughout the state, Smith explained that OSI is better positioned to foster long-term healthy lifestyle choices among Maine’s residents. The state’s past reliance on natural resource extraction — the bread and butter of many rural communities —  is having its day of reckoning.

That leaves many towns struggling to maintain a positive self image. By more fully realizing its mission of increased participation in outdoor sport, Smith believes OSI is a resource for those places.

“From my experience, it’s not from an economic place first, it’s from a wellness place,” Smith said. “It’s a, ‘Jeez, we have this awesome spot, how can we get our community out here?’ Because we know it is good for our community.

“Our focus is for programming and engaging people in outdoor sport and then what they [the community] can do to help facilitate. It’s not like we are showing up and saying if you all learned to mountain bike, your entire community’s economy is going to change. We are saying, if you engage in this, the same tool that makes you successful in engaging in this are the tools that can help you be successful in forging out where you want to go and what you want to do with your life and with your community.”

Supporting a community, according to Smith, can have different looks: OSI can rent equipment like mountain bikes, stand-up paddleboards, and cross-country skis so a summer class can be offered, an after-school program, or a two-week physical-education unit. OSI also offers classes for educators so they, too, can run outdoor sport programs. Adults will have the opportunity to participate in local OSI clinics or participate in more complex adventure or athletic trips.

“We are not just there to just show up for two days and run this camp, we are there to work with that community to figure out how this can work long term for them,” Smith explained. 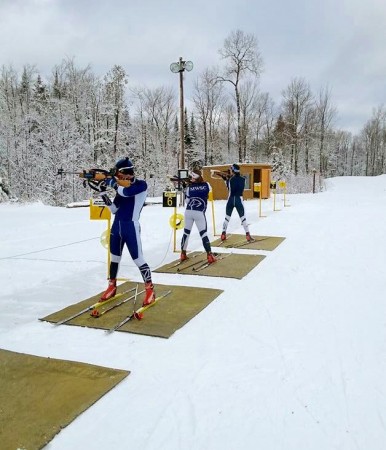 Back to the earth spinning — winter comes early to Maine. And OSI will compliment what MWSC has done in the past with regards to biathlon and cross-country skiing, but not at the post-collegiate level. OSI is still interested in podiums, but its place is in fostering, what Smith referred to in an email as, “participation and performance” at the junior levels of the sport.

OSI will offer what it is calling “gap-year support” to nordic athletes between the ages of 17-20, up to two years out of high school.

“We have realized that, especially here in Maine, at the junior level if we want more folks on the podium at an upper level, we want more folks engaged at a lower level. And I think everyone understands that wherever they are,” Smith said about promoting nordic sports at the highest levels. “And we recognize that we need to figure how to help more young people self identify first as an active person that wants to go outside let alone someone who is interested in competing in nordic sport. And we are lucky in that we have a diverse array of programs under the OSI umbrella that is pulling a lot more kids in starting at ten years old,  then up through high school. And we have made structural changes in high school racing programs so that now we have more OSI coaches on the ground in more parts of the state working to get more new faces out there.”

Several athletes, including Russell Currier, Kelsey Dickinson and Casey Smith, had already lost their funding due to MWSC funding cuts in 2014. Dickinson left biathlon (at least for now) and returned to the College of St. Scholastica, where she was the runner-up in the 5-kilometer freestyle at 2016 NCAA Central Regional Championships. Casey Smith (no relation to Mike nor Mary Barton Smith) joined the Craftsbury Green Racing Project to continue his biathlon career.

Mike Smith explained that OSI is currently without any collegiate or post-collegiate cross-country skiers. They will begin recruiting athletes for their 2017 gap-year cross-country program this fall. The biathlon racing team will consist of two gap-year athletes and three University of Maine-Fort Kent biathletes.

Seth Hubbard, sport development director and biathlon head coach for OSI, said in an interview that 2014 Olympic biathlete Currier continues to train with OSI and his assistance from OSI is limited to training-site support. As for potential gap-year athletes in biathlon or cross-country that would like to transition into the elite levels of their respective sports, “We can set them up for that,” Hubbard said.

Although not involved with the highest end of competitive nordic sport, OSI is committed to building toward the future. There’s a name change and a bigger umbrella when considering the scope of their mission.