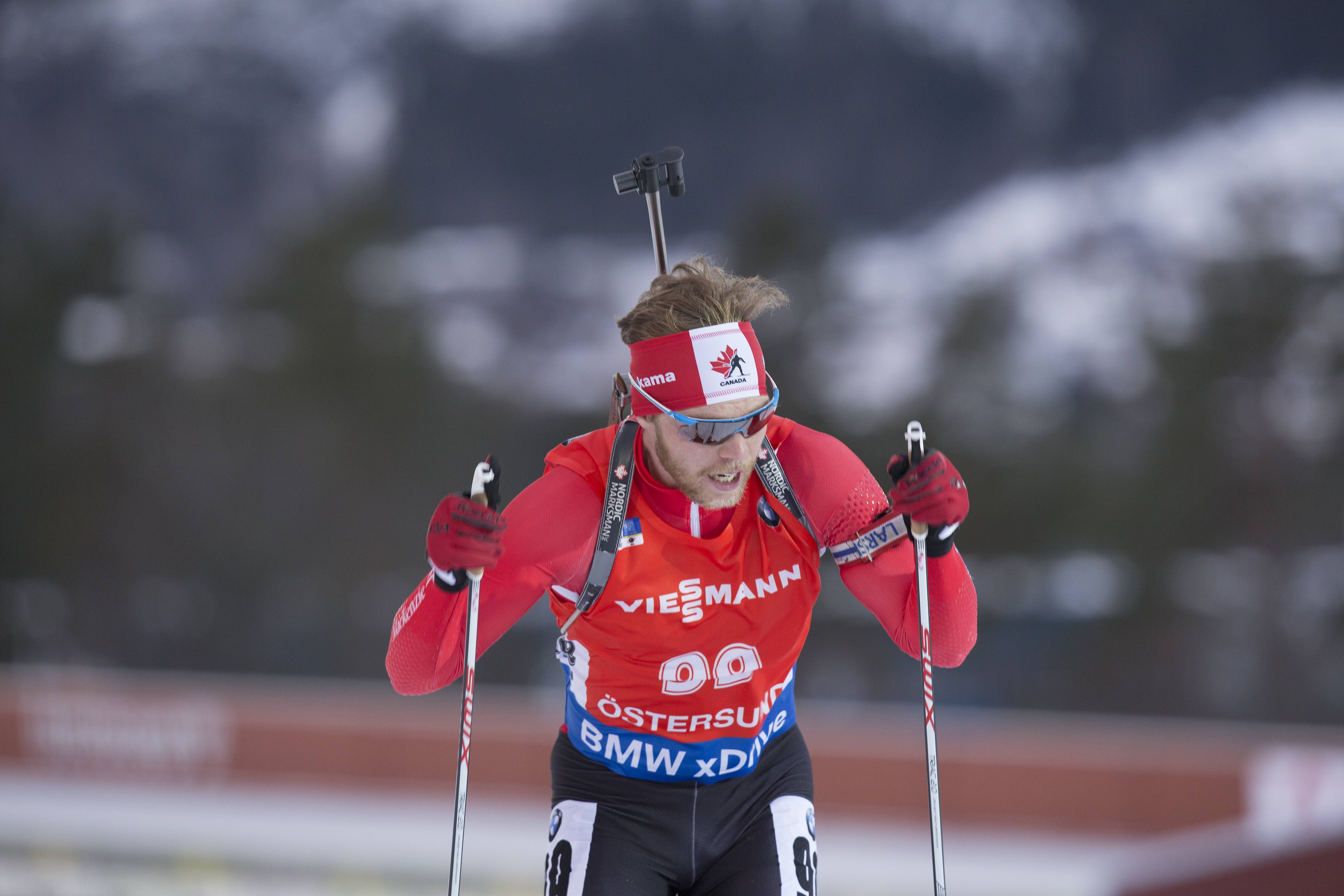 In one of the first races of the 2015/2016 season, Canadian biathlete Macx Davies scored his first World Cup top-10 finish, besting his previous top result by more than 30 places.

It was a bit of a game-changer for the Calgary native, then just 22 years old.

“Normally I don’t hit my stride till after Christmas, so to come out of the gate with my first World Cup points and a top 10 was a crazy start to the season,” he wrote in an email last week. “Which also made it hard to try and repeat that performance throughout the season.”

On that day last December in Östersund, Sweden, Davies became just the third active member of his men’s World Cup team to have a top 10.

And yet in a topsy turvy season which saw Canada notch a number of first-evers, his place among the team wasn’t so clear.

A few months later, Davies watched from the sidelines as his four teammates Christian Gow, Nathan Smith, Scott Gow, and Brendan Green locked up a bronze medal in the men’s relay at World Championships. Davies hadn’t been named to start that day. 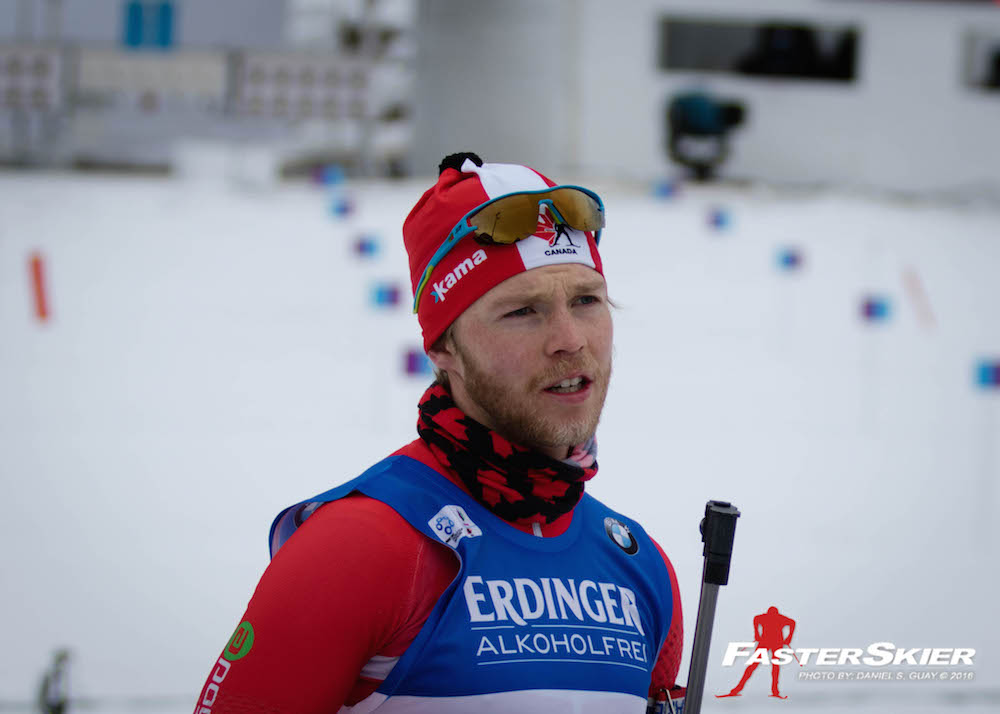 “Watching from the sidelines was one of the most conflicting experiences I have ever had,” Davies wrote. “On one hand I was super excited for the guys and for the whole team to have such an achievement, but on the other I was disappointed that I was on the sidelines watching, not racing.”

There were a few possible reactions. One would have been to retreat and assume that the four-man team was set in stone going forward. Another would be to try to get onto it.

“My motivation did waiver after their performance for a while, but now I know I am stronger because for it and I am truly happy for them,” Davies explained. “Also I am determined to be a part of the next record-breaking performance from this team.”

He’d had other high points of the season — racing the World Cup on home turf in Canmore, Alberta, where he finished 25th in the sprint, for instance.

That same weekend, he teamed up with Rosanna Crawford, Sarah Beaudry and Brendan Green to finish sixth in the mixed relay, tying the best result a Canadian team has ever had in the event.

And Davies became something of a media personality when Norway’s NRK broadcaster produced a mockumentary of him beating teammate Christian Gow to win a World Championships race, based on a finish-line interview in Oslo. (The original segment is available to view only in Norway, but you can find other versions online under the title “Macx The Man”.) 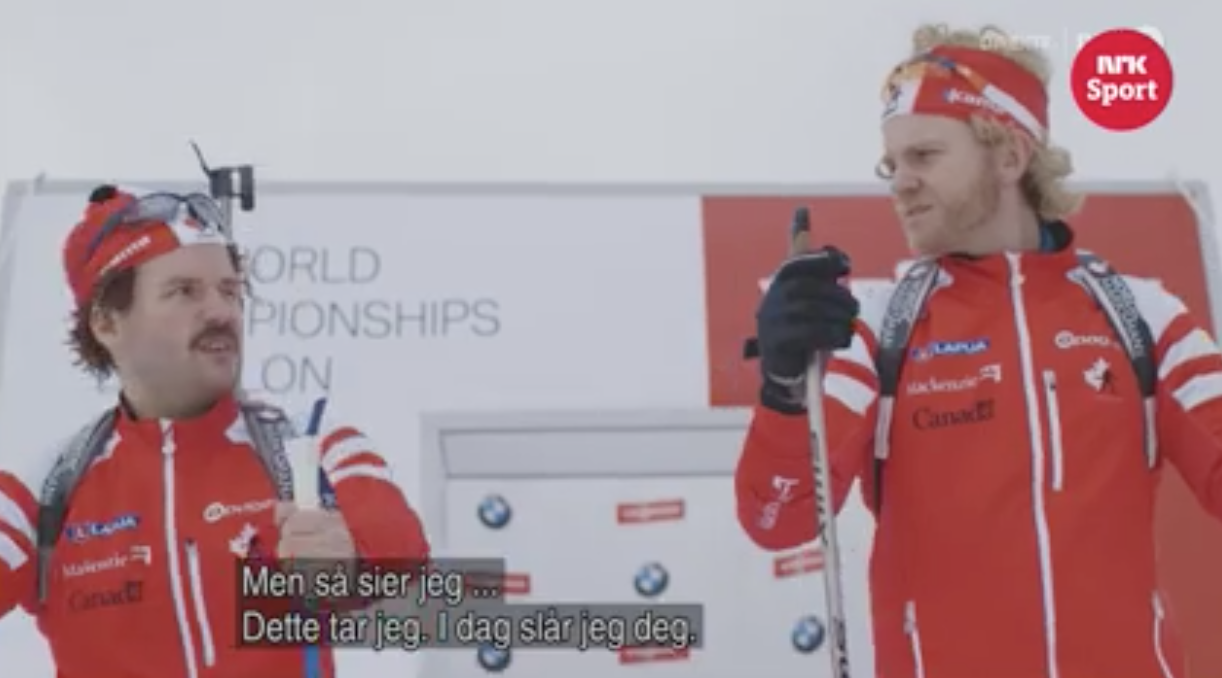 “Macx Davies” and “Christian Gow” trash-talking on the start line, as dramatized by Norwegian comedians on NRK.

“I did not think I would have this kind of following until I was on the podium a couple times, but it has been fun having people ask for my picture and autograph,” Davies wrote. “I never really thought that I would be the best known Canadian because of my dance moves or my interviews.”

(He’s also known for his beard.)

Off-trail hijinks aside, his biathlon chops did notch Davies an A-team nomination this spring (which Biathlon Canada calls its “Eh!” team), and he has continued to train with Smith, Green and the Gow brothers. It was the first time he and Christian Gow — now both 23 years old – were named to the A-squad.

“We trained together everyday for the last few years anyways, but having all the men on the ‘Eh’ team means we are all closer now,” Davies wrote. “We had always been training with Brendan, Scott and Nathan, but the difference this year was that Christian and I were keeping up with those guys.”

Davies has already had his first taste of international competition this season, with the Canadian team trials races in Canmore on the Frozen Thunder loop. The American and Ukrainian men’s teams were on hand to beef up the level of competition. While Davies was pre-qualified for the World Cup, putting on a bib still gave him a sense of where he was at.

Davies finished 14th and fifth in the two sprint races in Canmore, the fifth and third Canadian on the two days, respectively. 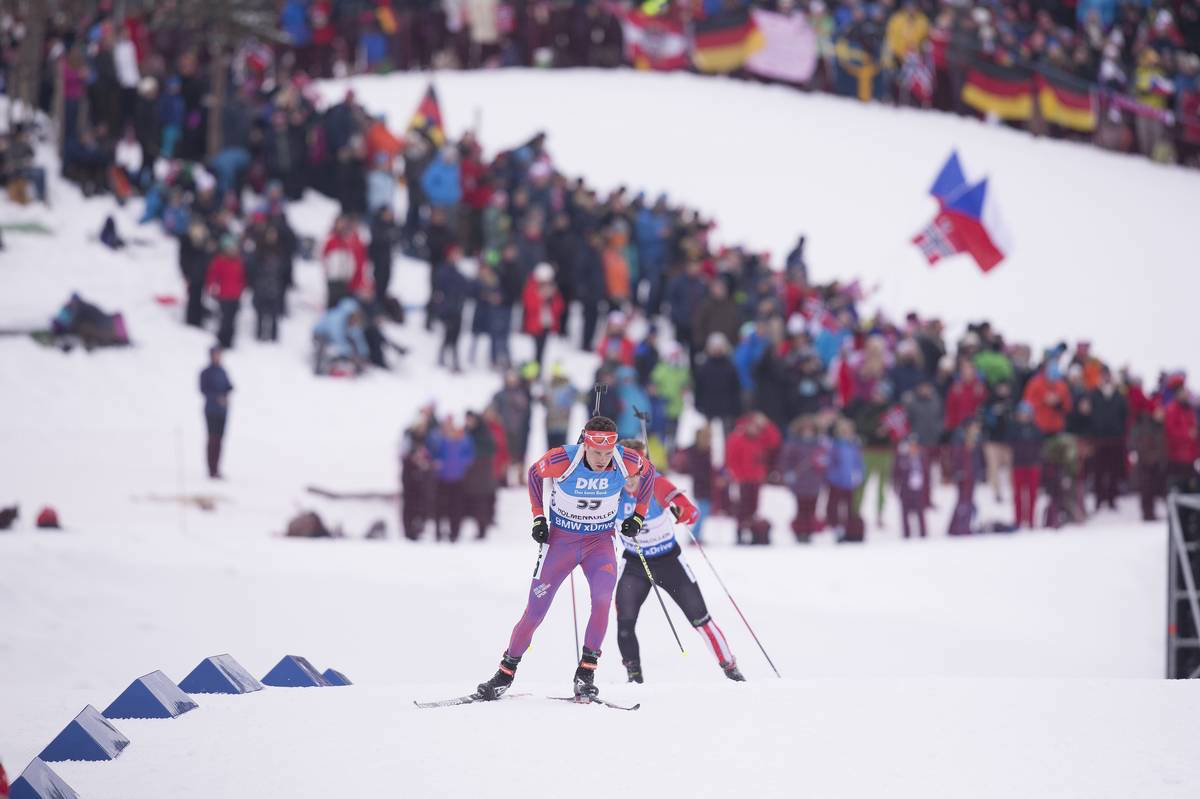 Tim Burke of the United States leads Canada’s Macx Davies in the World Championships 10 k sprint in Oslo, Norway. At his first senior World Championships, Davies finished 58th, then moved up to 53rd in the pursuit. (Photo: US Biathlon/NordicFocus)

“The trials were challenging for me,” he wrote. “I had a hard time shooting both days and was struggling with the hot weather (10+ degrees [Celsius]). But I am happy with my skiing in those races, and I know that my shooting is getting better. I think you can read into those results as a base line from which this season will only improve upon.”

Davies is dead serious about doing even better this season than he did last year.

“I am looking at breaking into the top six a couple times as well as trying to stay within the top 25 [overall] for the season,” he wrote. “These goals are not going to be easy, but I think they are within my abilities and will be excited to see them come true.”

For now, Davies is heading back to Östersund, where he got that first top 10, to start off this World Cup season. When asked how he had gotten that notable result, Davies made it clear that he could do it again.

“Really I made that big jump by seizing the opportunity of bad weather to leapfrog my best results,” he explained. “Hitting 10 out of 10 that day was like 12 out of 10 on a normal day. What it means is I can use anything to my advantage, so watch out!”

Moving in with my girlfriend

Going to New Zealand for 3 weeks.

Competing at home in Canmore

Martin [Fourcade], he just seems in a league of his own.

Retired and living in the mountains, in a house that I built.