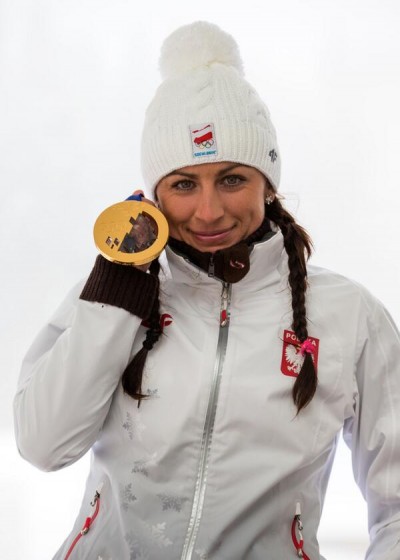 Justyna Kowalczyk with her gold from the 10 k classic at the 2014 Winter Olympics in Sochi, Russia. It was her second gold medal and fifth at the Olympics. Kowalczyk recently announced she plans to continue ski racing, but with modifications to her training. (Photo: FIS/NordicFocus)

It’s not over  ’til it’s over, and as Justyna Kowalczyk announced at a recent Polish press conference, she’s not hanging up the skis yet.

Her potential retirement at the end of the 2013/2014 season became more plausible when the 31-year-old Polish gold medalist said the Sochi Olympics would likely be her last. She did not finish the final race of the Games, the 30-kilometer freestyle mass start, because of a broken foot she raced on throughout the Games — with pain-numbing injections — and won a gold medal with in the 10 k classic individual start in Sochi.

Kowalczyk bailed on the remainder of the World Cup season following the Olympics because of her foot injury.

“The foot comes up, but she still needs a lot of painkillers to train and compete,” Kowalczyk’s Facebook post stated. “It’s time to stop with all these chemicals. Winter time is over.”

And while she recently told reporters in Krakow that she’s going to continue into next season, Kowalczyk noted she’s going to be more restrained in her training.

“I decided that I will continue to compete, but on a different basis,” she said, according to FIS. “Sixteen years of training left marks on my body and I need a rest. The training will be aimed for the World Championships in Falun.”

Her first training camp is scheduled for early August — four months from now — and she plans to train alone or with her club in the meantime.

“World Cup will not be the main goal next year but training for the World Championships,” she added. “I will be aiming for competitions in classical technique in Falun.”

Kowalczyk is a two-time gold medalist in classic distance events, and a two-time world champion in skate races: the 15 k and 30 k at the 2009 World Championships in Liberec, Czech Republic. She has five Olympic medals and seven world-championships medals — all in individual events.