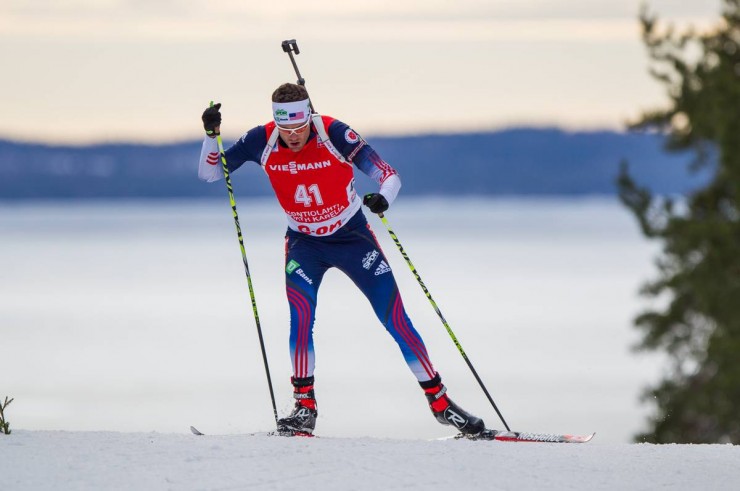 The winds were calm and the course was wet today in Kontiolahti, Finland for the IBU World Cup. With unseasonably warm temperatures officials had to heavily salt the course, which provided for firm if wet conditions. Perfect shooting and the stamina to continue skiing strong as the course deteriorated would be necessary to win the day, and Norwegian Johannes Thingnes Boe delivered, shooting clean and skiing the course in 23:33.2. The perpetually-on-the-podium Frenchman Martin Fourcade was second 7.1 seconds later after also shooting clean, edging Germany’s Arnd Peiffer (+7.2), who barely missed overtaking Fourcade after a receiving one penalty in prone. Peiffer was the only finisher in the top ten to receive a penalty, and one of only two in the top 15.

Green was happy with his race, writing in an email that though he felt “a bit flat” initially, he “managed to ski a fast last loop to move up quite a few places to end the day with a fairly solid result. [I’m] not sure what was up physically but it seemed like it took the body a while to get going today.  We’re at the tail end of a long season so at this point I’m trying my best to finish out the season with strong and consistent results.”

Burke was surprised by what he regarded as a poor finish.

“I was pretty happy with my performance today and I expected a good placing, but the results said otherwise,” he wrote in an email. “I felt good on the skis and with one penalty I expected to be close to the top ten but I was far back from this.  I’m not really sure what happened and where I lost so much time.  I am just happy that we don’t have a pursuit based off this race!”

Competition continues on Saturday with a pursuit.