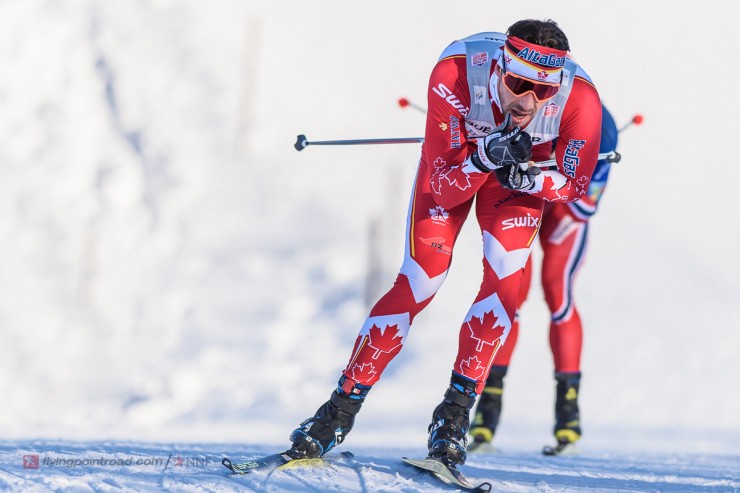 If you’re a fan of North American cross-country skiers, it’s likely you have an affinity for Canada’s Alex Harvey. Hailing from Quebec, he’s a marketable star in his home province. That may stem from his affability or his encroachment on Norway’s “stranglehold” on the World Cup overall.

This year, for Harvey, his motivations are twofold. “The main goal is Lahti World Championship for sure, to be on the podium there,” Harvey said in a recent phone interview.

Considering past performances, it’s not far-fetched to consider Harvey a contender for the overall: he was third overall in 2014, ninth in 2015 and seventh in 2016.

“When Devon [Kershaw] was second in the overall in 2012, it was the first time I actually believed that a Canadian, or a North American man for that matter, could be on the overall podium,” Harvey said about his evolving aspirations. “Just because I saw Devon, one of my best friends, teammate, roommate from the last ten years, be on the top-three podium — that was the first year I believed it.”

“But the championships medal is more important for me,” he said. “If I have to choose between say like championship gold and first place in the overall, I’d probably take first place on the overall. But I think championships are still a bigger deal to me than second or third [overall]. That’s why I put the focus still on the championship. The overall is still in the back of my mind and I am still doing every single weekend this year like previous years, other than the weekend after the Tour de Ski.”

“Just because I saw Devon, one of my best friends, teammate, roommate from the last ten years, be on the top-three podium — that was the first year I believed it.” — Canadian Alex Harvey, on his overall World Cup aspirations

Harvey noted that he will skip the pre-Olympic World Cup in PyeongChang, South Korea, to rest up for the late-February World Championships in Lahti, Finland. Harvey explained that a small contingent of Canadian coaches and athletes will take a quick trip after the World Cup season concludes to preview PyeongChang, the 2018 Olympic venue.

With firm goals set, Harvey has been fastidious in his preparation. After the 2014/2015 season, Harvey underwent Iliac artery surgery to remedy a circulation issue in his legs. Last summer, although he felt better in certain running tests he’s used as historical benchmarks, his regiment deviated from his normal routine. 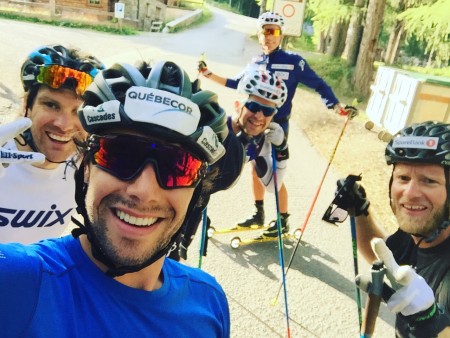 Alex Harvey snaps a photo of himself with Norway’s Martin Johnsrud Sundby (r), Devon Kershaw (l) and others while training in Livigno, Italy, this summer. (Photo: Alex Harvey/Instagram)

“Because last year when I started training again I was coming off surgery, so I couldn’t do exactly what I was used to,” Harvey said of his 2015 dryland season. “I could not do strength or any intensity for two months. So this year I was back kind of doing what I was used to pretty much doing for my whole career before the summer of 2015. That’s just normal strength in the gym twice a week and a third time doing core and then intensity once a week for May, June and July. And then switching to twice a week after that. Some speed sessions, too: two speed sessions a week. There’s really nothing new for me. But it was kind of different from last year because I couldn’t do everything I wanted last year. I just went back to what I knew worked for me.”

According to Harvey, it’s still working. There’s a five-minute double pole test, a six minute skating test, and a 25-minute running test that both Harvey and his coach Louis Bouchard have used as fitness barometers throughout his career.

“I have improved all of them by ten full seconds each time,” Harvey said of his test times. “I mean, last year the big jump was on the running test because I was able to get out of threshold and push all out. And this year I was still able to improve a little bit on the running and  keep improving on the other aspects. Every year I think it is important to have some past kind of test, you need to know if things are working properly or not. We put a lot of focus on those test, but we have to keep a global perspective. But this year everything was improving, so that is good.”

If the past is any guide, Harvey, racing in his maple-leaf-emblazoned lycra, should be high up on the leaderboards. And when it’s world champs time, Harvey believes the skiathlon is his best individual shot at medaling. 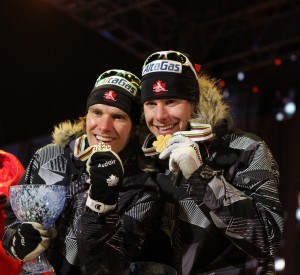 The Norwegian odds makers might just be hedging against their teams possible demise by picking Harvey as the spoiler.

This Spring I was able to start training like I did my whole career,which meant strength, intensity, speed and volume. Spring of 2015 I was only allowed volume until July!

Nothing major…I’m looking for a few seconds here and there. Overall
I’m just a bit stronger, a bit faster and a bit more endurance..but nothing major! Biggest difference from last Summer is strength is back to what it was prior to my surgery.

Louis Bouchard is still my coach after 10 years! Our National team is pretty similar to previous year, other than Babs [Ivan Babikov] is now an assistant coach! The training group in Quebec has a few new guys that can challenge and beat me, mostly in sprint time trials.

Hawaii. After no warm vacation in the Spring of 2015, it was nice to get back there. I also started the training season in the Islands so that was a nice change!

The sprint on the Plaines of Abraham in Quebec City last March. The crowd rushing over the fences to come to me after the race, it felt like a bunch of college students rushed the football field of their favorite team after a big win!

School books. I’m always afraid I will subconsciously leave them behind. 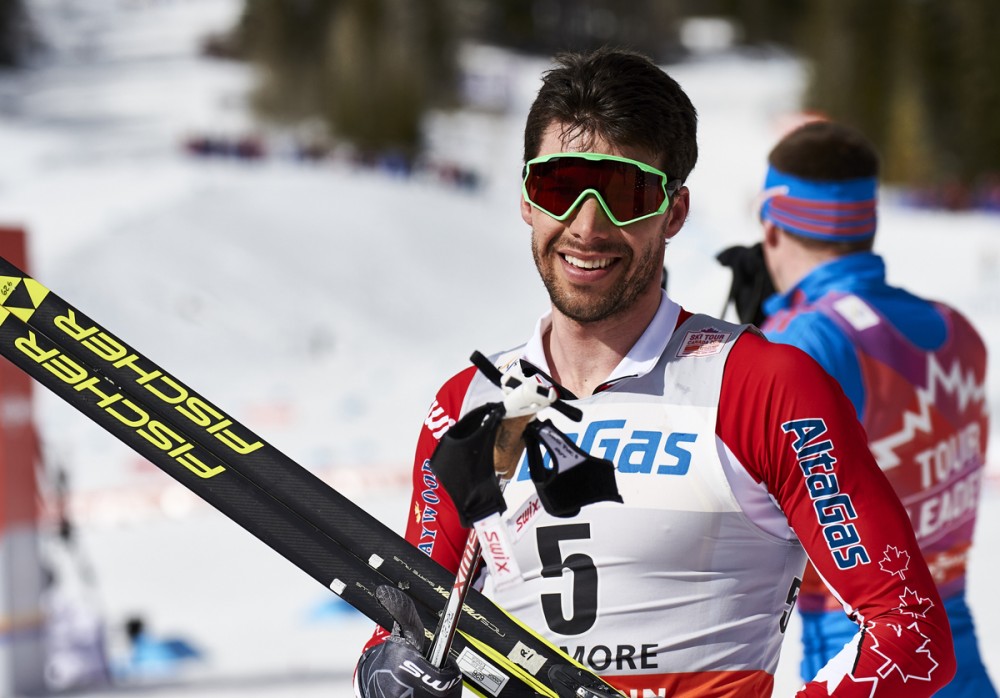 Alex Harvey before the start of the men’s 30 k skiathlon at the 2016 Ski Tour Canada in Canmore, Alberta. (Photo: Fischer/NordicFocus)

Lahti, FIN. Been there before but Worlds in Scandinavia is always exciting.

Being away from family and friends for extended periods of time.