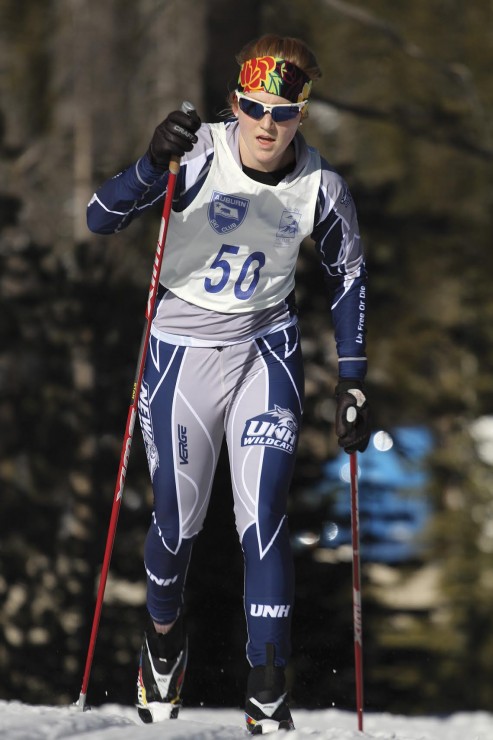 Annika Taylor, formerly of UNH, on her way to winning the ladies&#8217s five k at the 2013 Snowshoe Thompson Classic at the Auburn Ski Club in Truckee, Calif. (Photograph: Mark Nadell/macbethgraphics.com)

Even though a lot of the focus of Globe Cup racing is on the stars from powerhouse skiing countries, the World Cup fields are filled with skiers who are operating towards goals that really do not always entail a podium. Racing on the Globe Cup is not often about the pursuit of medals but the expertise itself.

For Annika Taylor, the Planet Cup encounter hasn’t very sunk in yet. Just six months after graduating from University of New Hampshire (UNH), Taylor, 22, discovered herself on the starting up line of her initial World Cup race in Kuusamo, Finland, in late November as the sole female representative of Fantastic Britain.

A native of Truckee, Calif., Taylor holds dual British citizenship as her father is initially from the United Kingdom (her loved ones now lives in Truckee). As a junior, she skied for California’s Auburn Ski Club and the Far West Ski Association, winning 3 California State Championships and notching three top-ten finishes at Junior Nationals. Taylor continued her ski career at UNH in Durham, N.H., under the guidance of head coach Cory Schwartz.

Annika’s 1st taste of worldwide racing came in 2014 when she raced with the British nationwide staff at U23 World Championships in Val di Fiemme, Italy. Though she had inklings of future options to race for Fantastic Britain at that time, she recognized she would need to carry on to see improvement to make competing publish-collegiately worthwhile.

These gains had been recognized in a breakthrough season her senior year, highlighted by a seventh-place finish in the 15 k classic at 2015 NCAA Skiing Championships. Earlier last season, she positioned ninth in the 20 k classic mass start at U.S. nationals.

On graduating in the spring of 2015, Taylor was armed with both a chemistry degree, and the opportunity to carry on skiing for Great Britain. Racing for the British team would suggest more international competition and the likelihood to compete with the best skiers in the globe on the Planet Cup &#8212 an opportunity she couldn’t pass up.

In May possibly, Taylor joined the newly established Sugar Bowl Academy Elite Team based out of the Truckee/Tahoe region. The 2015/2016 season is the team’s debut as it aims to fill the gap left by the recently dissolved Far West Elite staff and give financial support, coaching, and education opportunities to its athletes.

Right after a summer training with the Sugar Bowl Elite Staff as well as the British staff in Scotland, Taylor started her first Globe Cup season in November with British Cross Nation Head Coach Roy Younger. Britain’s other female skiers opted not to race in Time period 1 of the World Cup, leaving Taylor as the sole lady on the team. She joined a men’s contingent on the circuit, including recent World Cup bronze medalist Andrew Youthful.

FasterSkier caught up with Taylor about her Globe Cup experience over the holiday break. She spent the holidays education in Davos, Switzerland, sharing an apartment with U.S. Ski Group member Caitlin Gregg. The two met many summers in the past, as Gregg visits Truckee in the summer to train at altitude and pay a visit to loved ones.

Soon after the vacation break, Taylor raced the initial 3 phases of the Tour de Ski in Lenzerheide, Switzerland, just before traveling to Östersund, Sweden, to compete in Scandinavian Cup races. 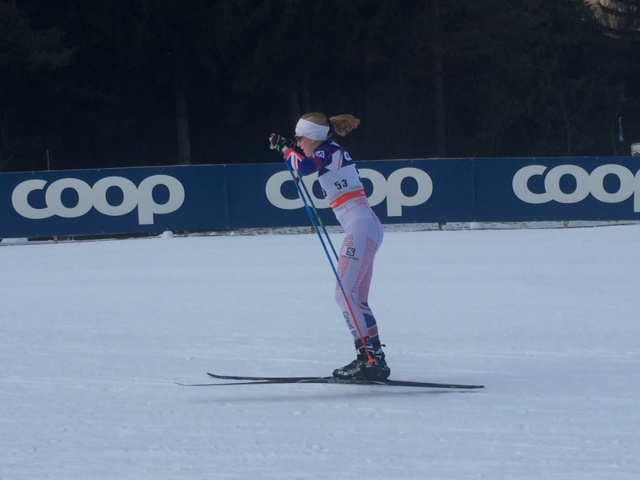 FasterSkier: What is your favored Globe Cup venue so far?

Annika Taylor: I genuinely appreciated Toblach [Italy]. They have a two-lap sprint course and I like V2 technique and I felt like it played to my strengths. And it was beautifully sunny so that often helps.

FS: What do you consider your ideal races so far on the Planet Cup?

AT: My very best race was my 1st race: the classic sprint in Kuusamo [exactly where she placed 50th in the qualifier]. It was very best consequence so far and the total experience came to fruition at that second, also, so I’ll never neglect that day. For almost everything to come with each other in the 1st race, I was really pleased with that.

The other races I was most pleased with were the opening races in Beitostølen, Norway. That’s the place the Norwegian team started their season as properly so it was Globe Cup caliber racing just with fewer countries. That was my really first taste of racing the very best in the world so I was undoubtedly a minor star-struck that weekend.

FS: Do you desire the sprints or the distance races?

AT: I would say distance has turn out to be my cup of tea. When I was a junior I was a lot more of a sprinter but currently being at university for 4 years, I did not train much for sprinting. If I have a bit more sprint education in the subsequent couple many years I believe I’ll genuinely increase to appreciate it. Right now I do like distance racing a bit far more. You can push oneself longer and more difficult and there is a lot more time for tactical fixes. I like having that possibility to flip things around.

FS: How is the intimidation factor racing the ideal skiers in the world?

AT: There is certainly intimidation, but there is also far more a respect and awe for them. I am also just excited to be racing simply because I don’t have significantly strain to complete this year. Obviously I want to ski fast, but I have to adjust to so numerous variables that I really don’t have the energy to be nervous since I have to emphasis my energy on skiing the very best I can technically, tactically, and physically in each race. But at the exact same time, there is that moment that you think, &#8220Woah, we are on the World Cup circuit, this is crazy.” 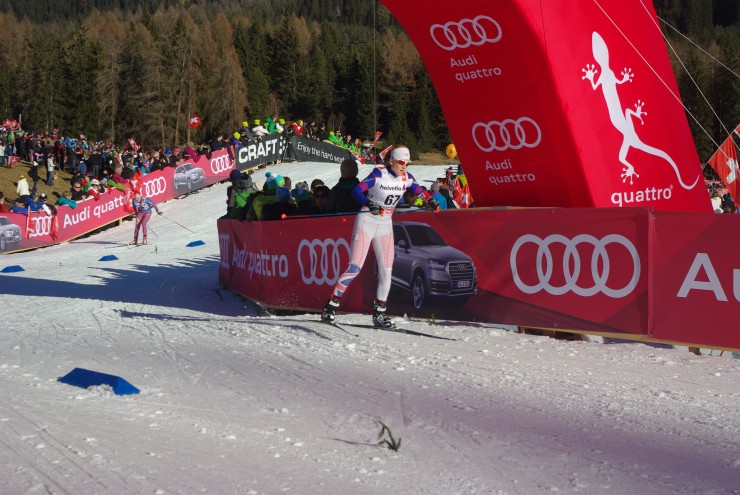 FS: What was your favourite component of the Tour de Ski?

AT: My preferred component of the TDS has to have been the environment and just the basic pleasure from both the followers and the athletes! You could sense the nervous power bouncing around the wax cabins, and then going out to warm up on the race track with twelve,000 followers (outfitted with flags and cow bells) on the sprint day, with the sun shining down was a feeling I&#8217ll never fail to remember! During the weekend supporters and athletes appreciated foods vendors, opening ceremonies, performances from bands and dancers, and totally free swag. Cross-country skiing can really feel a bit like an below-appreciated sport at times, but this was the polar opposite!

FS: What was the greatest big difference racing the Scandinavian Cup races vs Planet Cup races?

FS: What race did you take pleasure in the most since the holiday break?

AT: I was fairly pleased with how I skied the 10k freestyle race in Östersund! [She positioned 21st.] Getting back at low altitude produced racing just that tiny bit &#8220peppier,&#8221 and it was encouraging to be back in a discipline exactly where I can be more aggressive and &#8220catch a ride&#8221 mid-race with the girls racing all around me.

FS: What are your goals for the season?

AT: My major goal this season is to race well at U23 Worlds due to the fact that is exactly where I can be the most aggressive. But there are often goals week to week, even weeks I really do not have races I will emphasis on skiing technically properly during every exercise so that when my technique comes underneath strain in a race, the foundation has been laid and I can ski technically effectively. I usually have consequence based mostly objectives but this yr is challenging not actually being aware of what is going to happen competing against the very best in the world. I cannot really measure accomplishment against them just yet.

At the Toblach ten k classic Heidi Weng of Norway started out behind me (in the interval starts) so my aim was to catch a trip with her when she passed me and match her technique, tempo and pace. The Norwegians know how to ski effectively, ski quick and charge. That is what I’m making an attempt to learn this yr is to find that additional degree of intensity in a race required to do effectively at the Globe Cup level.

FS: Have you been enjoying the life style?

AT: I wasn’t certain how I’d do because I chose not to go home for Christmas and I believe it will be a complete of five and a half months on the road. I’m studying to be fine wherever I’m at with whomever I’m with, but also not feed into the ups and downs that go along with being an elite athlete. I’m truly addicted to the life-style due to the fact every weekend is a new experience. I’ve really loved meeting new people and it has motivated me to discover bits of different languages.

FS: What is your schedule for the remainder of the season?

AT: Following the Scandinavian Cup, I will head to Ramsau, Austria to train for a number of weeks. My next World Cup race in Lahti because Worlds will be there subsequent 12 months and I can get a come to feel for the program and the region. Following that U23 Worlds in Rasnov, Romania then the day following fly out to Canadian Tour. Then I will race the Spring Series in Craftsbury, Vermont and lastly residence.