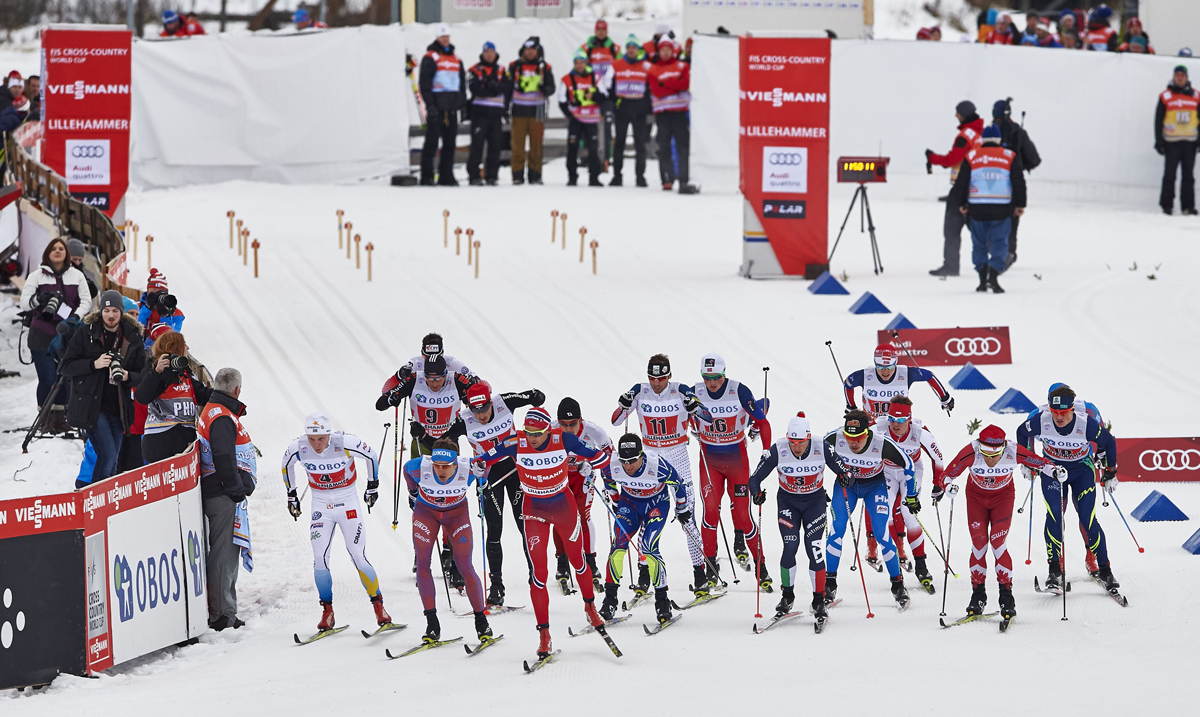 The start of the men’s 4 x 10 relay at last year’s World Cup in Lillehammer, Norway. While Lillehammer will host the first mini tour of the season this year, there won’t be any relays there. (Photo: Fischer/NordicFocus)

The circuit then moves to Davos, Switzerland, another staple for December races, for its famous 15/30 k freestyle individual races followed by a freestyle sprint Dec. 10-11. La Clusaz, France, hosts the next World Cup Dec. 17-18 (skiathlon and a relay) to wrap up Period I.

After that, the regular World Cup season picks up again back in Toblach with two days of skate races (sprint and team sprint) Jan. 14-15. Then, it’s onto a brand-new venue on the World Cup as Ulricehamn (near Gothenburg), Sweden, hosts the 10/15 k classic and a relay Jan. 21-22. Skiers stay in Sweden for the next weekend of racing in Falun, with a skate sprint and 15/30 k freestyle mass start Jan. 28-29.

In addition to releasing its calendar, FIS Cross-Country outlined its most-important decisions made at its 50th Congress earlier this month in Cancun, Mexico.

For starters, juries across the sport may designate and mark zones where double poling is not allowed “in order to preserve the classic technique,” but “as a consensus, it was agreed that this rule will not be applied at the World Cup, World Ski Championships and Junior World Ski Championships level.” In other words, this is going to be tested at lower levels of racing.

There’s also a new age requirement for all FIS competitions: athletes must be at least 16 years old before the end of the calendar year (Jan. 1-Dec. 31).

FIS points will be doled out at all FIS long-distance events (i.e. marathons) spanning 50 k or more (or 42 k if they’re at an elevation of at least 1,500 meters, roughly 5,000 feet) to encourage  higher levels of participation.

And an equal quota of eight men and eight women per nation at U23 World Championships has been approved (note that four of each gender are allowed to start per race).

On the World Cup, the start quota for competitions has been reined in, reducing the number of athletes each nation is allowed to enter per race to 15 (and 10 for the Tour de Ski). For team sprints and relays, all nations are allowed to enter up to two teams.

The FIS Cross-Country World Cup’s basic start quota “nation quota,” which is calculated according to the Team Cup standing from the previous season

In terms of format, the heat selection tested in individual sprints (the 30 qualifying athletes per gender can choose their quarterfinal heat) has been approved and will be used at the World Cup, World Championships and Olympics.

In regular-season team sprints, the top-four teams from each semifinal will now automatically advance to the final, and the remaining seven teams can qualify based on time. But at World Championships, the qualifying system is as it was before — with two teams from each semifinal automatically advancing and the next six-fastest teams qualifying as well (putting the pressure on to finish first or second).

Interval starts will be mostly conducted the same, except in men’s races, 40 athletes will start in front of the seeded group (instead of 30) and the top-15 athletes can chose their start bib in that order (first to 15th).