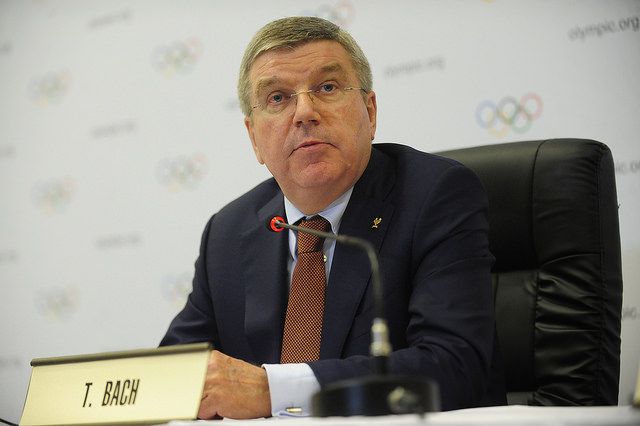 At the fifth Olympic Summit in Lausanne, Switzerland, on Saturday, the International Olympic Committee (IOC) forged a declaration which it hopes will move the sports world towards more effective anti-doping policy.

“What I can say is that this declaration is a clear commitment by the entire Olympic movement to an independent and worldwide harmonized fight against doping by a stronger [World Anti-Doping Agency],” IOC President Thomas Bach said in his introductory remarks to the press. “In this respect this declaration is a milestone in the implementation of Olympic Agenda 2020 which we approved in December 2014, where we were calling for novel approaches from all stakeholders.”

The declaration contains strong language, for instance beginning, “Protecting clean athletes is an absolute priority for the entire Olympic Movement.”

And it suggests changes that many in the sports community have long advocated.

For instance, the declaration states that the World Anti-Doping Agency (WADA) should be independent of state influence; whistleblowers should be protected; athlete representatives should be involved in decisionmaking; more money should be dedicated to the fight; and sensitive information should be stored securely, an increasingly hot topic after the Russian group Fancy Bear hacked WADA and released medical information on Olympic athletes.

Yet the declaration contained few details. In a press conference, Bach clearly showed that he and the Olympic leadership had specific ideas for how changes could be implemented. But after sometimes discussing them, he repeatedly said that it was up to WADA to decide what the new policies would look like and go about putting them into place.

However, the Olympic Summit confirmed that many of the proposed changes would be implemented through WADA, a conclusion that the organization welcomed.

“I’m very happy with it,” WADA President Craig Reedie told the Associated Press after the meeting. “We have been given powers on compliance. We are going to produce a whole range of potential sanctions for different degrees of non-compliance. That is in our hands and we will do that. If we are granted these powers … I can assure you they will be used properly and well.”

In fact, Agenda 2020 – Bach’s signature policy proposal when he was elected President – was light on the details of how it would address doping. Recommendation 15 was titled “Change the philosophy to protecting clean athletes”, with the only specific action point being “The IOC’s ultimate goal is to protect clean athletes.”

And recommendation 17, titled “Honouring clean athletes”, was only about hosting formal medal ceremonies for athletes who were moved up the results sheet after a Games due to doping by their competitors.

Thus doping was a comparatively small focus of the agenda. Other topics received far more detail and discussion. Recommendation 1, “Shape the bidding process as an invitation”, took up a whole page; Recommendation 26, “Further blend sport and culture,” had twice as much text as the three “clean athlete”-related provisions combined.

But doping has become a much bigger topic since 2014, with revelations of state-sponsored doping by Russia rocking multiple sports. The IOC – which has a 50% stake in WADA – has made clear that it wants to lead discussion of how anti-doping work should be reformed.

Initially, this was because WADA was not seen as responding in an appropriate and timely manner to major doping scandals.

Later, it seemed to be the opposite: Bach felt that WADA was responding too strongly.

For instance, WADA recommended that Russia be barred from competing in the 2016 Summer Olympics. This was based on the evidence that the Russian state security service and Ministry of Sport had worked together to infiltrate the 2014 Olympic anti-doping laboratory in Sochi and ensure that Russian athletes who doped would not get caught. That investigation is referred to as the McLaren Report.

The IOC not only ignored WADA’s suggestion, with 291 Russian athletes ultimately taking part in the Summer Olympics, but also went on a press offensive to decry the recommendation itself.

“The result is death and devastation,” Bach said of the recommendation to bar Russia from competing. “This is not what the Olympic movement stands for.”

Bach has repeatedly made clear that he thinks the IOC should have a strong hand in determining what the next version of WADA looks like.

“The McLaren Report and other incidents with regard to the fight against doping have made it clear that we need a full review of the WADA anti-doping system,” he wrote in a letter to IOC members in September. “The Olympic Movement, as 50 per cent shareholder of WADA, is ready to contribute to this discussion…”

One of the major tenets of the Olympic Summit declaration was that a new unit should be established as part of WADA, dedicated to harmonizing the quantity and quality of anti-doping tests within sports and countries.

Each country also has a national anti-doping agency, tasked with testing athletes of all sports within its borders. The U.S. Anti-Doping Agency, for example, led the investigation into cyclist Lance Armstrong. The Russian Anti-Doping Agency, on the other hand, has been disgraced.

As part of the new vision, WADA would be responsible for reviewing all these organizations’ testing plans as part of a “harmonization” scheme.

“This program has to be managed top down,” Bach said. “There, WADA needs the authority over NADOs [national anti-doping organizations] to determine which tests, and when, for these international elite athletes. Then a NADO would have to perform them. And these tests would not necessarily have to be restricted to athletes of the respective country. In this top down approach we could ensure more cross-border cooperation, there bringing more credibility to the testing programs.”

Such a scheme would undoubtedly balloon WADA’s costs, which is part of the reason that the declaration also pledged more financial support from the IOC for WADA.

“The Olympic Movement is ready to contribute to an increased financing along with its partners, the governments,” the declaration read.

But the ultimate manpower and budget of such a unit, as well as what power it might have over national and international testing bodies, was unclear.

When pressed on the issue by Steve Wilson of the Associated Press, Bach said only this: “With regard to the new unit, the antidoping testing unit, this Summit is about establishing the principles. Then the implementation can only be decided by WADA. The summit cannot take the decision.”

Similarly, the declaration called on WADA to “Ensure compliance with the highest ethical standards, in particular with regard to the resolution of conflicts of interests and integrity.”

But when asked whether there was a specific problem at WADA that necessitated this action item, Bach again demured.

“[It is just] to have a clear program, where you see then a potential conflict of interest, and how do you resolve them?” he said.

In fact, WADA President Reedie’s dual roles with the IOC and WADA are widely seen to have been a conflict of interest during WADA’s investigation of the Russian doping scandal. Reedie was made an IOC Vice President two years before he took the helm at WADA. He is still an IOC member but no longer holds an Executive Board role.

The Summit declaration sought to make WADA independent from other organizations which might influence its decisions.

But more independence from the IOC was not discussed – and in fact, in some cases the opposite seemed to be true.

For instance, the declaration called for all doping sanctions to be handled by the Court of Arbitration for Sport (CAS).

Compared to the current system, where cases are first arbitrated by the relevant international sports federation or national testing agency, this may remove some conflicts. CAS is seen as a fair and neutral body, even though many arbitrators are involved in sports governance at a national or international level.

And the current president of CAS, John Coates of Australia, is also a current Vice President of the IOC- the exact position Reedie had when he became president of WADA.

Finally, it was unclear whether the issue of noncompliance would also be handled by CAS, or still handled by WADA.

At the moment WADA can declare a country or international sports federation noncompliant with the WADA Code. WADA has been working to increase the tools it can use to punish such a violation, for instance by witholding the right to stage major international competitions without Code compliance. But some in the IOC, including International Ski Federation President Gian Franco Kasper, have pushed back.

Bach suggested that in order to determine who is responsible for declaring organizations non-compliant, state governments should be consulted.

“The consequences of noncompliance, there this has not been discussed in detail because in this respect, the governments are also concerned,” he said. “This needs to be addressed together with the governments, but the general rule I think is on all these systems that you do not want to see the prosecutor also being the judge. So there we will have to discuss this with the governments along with these guidelines.”

While stakeholder buy-in is essential to success, allowing governments to help decide the consequences for their own agencies being deemed noncompliant could result in weaker punishment.

Finally, in response to questions from New York Times reporter Rebecca Ruiz, Bach addressed the ongoing investigations into doping at the 2014 Olympics in Sochi, Russia.

The McLaren Report found state-sponsored doping and a massive cover-up; part two of the investigation is expected sometime this month.

Yet the IOC has taken no action against Russia, as previously mentioned declining to bar the country from competing in the 2016 Summer Olympics. Instead, Bach and his allies refer to the McLaren report as containing unproven allegations.

This remains a mystery to many, including the Institute of National Anti-Doping Organizations (iNADO), which counts 59 members including those on every habitable continent.

“As the IOC’s reaction to the McLaren Report has damaged sport – as many believe – then it must commit to becoming part of the solution and, not through denial and equivocation continue to exacerbate the problem,” iNADO wrote in a press release on Thursday. “One starting point would be to acknowledge, as has the Court of Arbitration for Sport and the courts of Switzerland and Germany, that the McLaren Report sets out well-documented and reliable findings and not mere allegations.”

Instead of doing so, Bach sought to double down on the IOC’s refusal to use the WADA investigation as the basis of any sort of action.

“We have two commissions on the IOC side because it is up to the IOC and also the international federations in particular to issue sanctions there,” Bach said. “Sanctions… can be applied only following their procedures. So by the Olympic Charter the IOC is requested before issuing any kind of measures or sanctions to give a fair hearing to everybody. As you know Mr. McLaren has not heard the Russian side there before issuing his report.”

However, this seems to suggest that the right to reply or defend oneself could come after a charge has been made, but before the sanction is applied. This does not appear to stop the IOC from provisionally suspending either individual athletes or larger organizations.

For instance, across sports athletes are issued provisional suspensions as soon as a doping violation is detected, and are not allowed to compete while their cases – including their defenses – are ongoing.

It is not clear what would happen if evidence from the IOC and WADA disagree. WADA has appealed doping cases to CAS where it feels that the World Anti-Doping Code has not been properly applied, including recently in the case of Norwegian cross-country skier Martin Johnsrud Sundby.

Bach also seemed to imply that after gathering its own evidence, the IOC may turn it over to an external body such as CAS to handle sanctions.

“Again here, also, following the normal judicial procedures, you have to make the difference between the prosecutor and the judge in order to have a legally sustainable procedure,” he said.