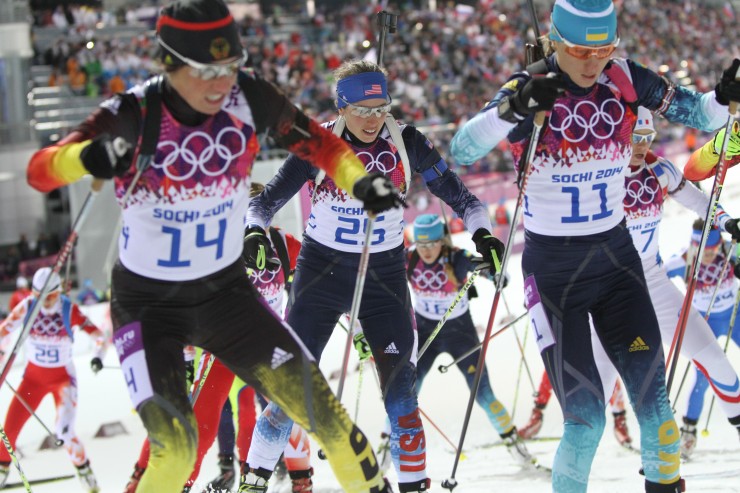 Susan Dunklee (bib 25) mixing it up in the beginning of the 12.5 k mass start competition today.

SOCHI, Russia – Susan Dunklee had already made history for the United States just by making it to the starting line of today’s 12.5 k mass start competition.

And it wasn’t a sure thing: biathlon races have been having a tough go of it here in Sochi in the last 24 hours, with the men’s mass start yesterday being delayed one hour, then postponed until this morning, then this afternoon, and finally rescheduled yet again for Tuesday. All day, the fog was socked in around the Laura venue, and nobody knew whether the women’s race would go off as planned at 7 p.m.

“I tried to do exactly what I normally would,” Dunklee said of the uncertainty. “I did keep looking outside now and then, like, oh, it’s still there. But I did my pre-race jog in the morning, I did my lunch at the normal time, all that stuff. Ready to go. Because you don’t know until you show up for zero. It can clear up in a matter of minutes.”

Eventually, the fog did clear, revealing the beautiful views of the Caucasus mountains that make the venue so special. And so today was the day, for Dunklee: she became the first woman to ever compete in a mass start for the United States at the Olympics. 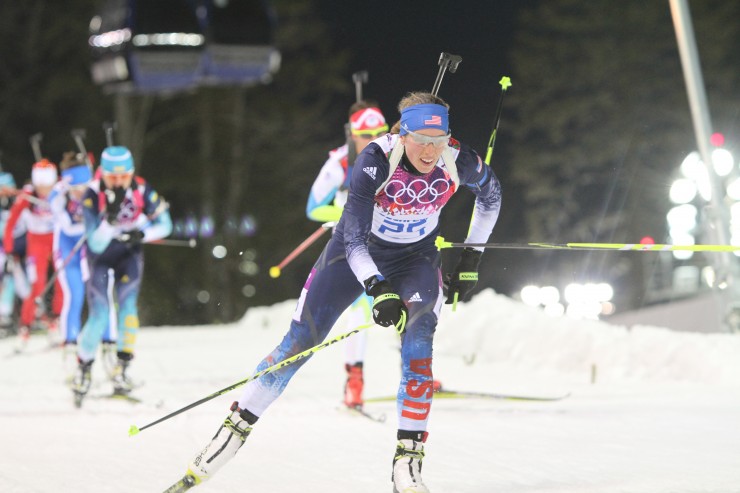 Dunklee on the move through the field.

Dunklee didn’t just show up to participate. She was right in the thick of things from the start, moving from bib 25 into the top ten over the first 2.5 k loop, then shooting clean to stay with the main chase pack.

“I felt so good going into that first loop, it was just so fun picking people off,” Dunklee said. “You get into this zone where you’re just reacting to all the little gaps and openings around you, and just making spur of the moment decisions about when to go and when to tuck in behind people. I just love that.”

Despite a penalty in each of the next two stages, Dunklee stayed in the top ten.

“My ski speed has been so good this past week, I felt very confident,” she said. “I am skiing the strongest that I have in my life, by a lot, in these last couple days. That’s a huge feeling and it gives me a lot of confidence.”

After another miss in the final stage, she slipped to 14th. Partway around the loop she had just five seconds to make up in order to reach the top ten. Both Dunklee and her coaches believed she’d be able to bridge the gap.

But today, it just wasn’t happening.

“Normally one of my strengths is being able to duke it out with a sprint finish with people, and today I just didn’t have it,” Dunklee said. “I tried to drop people going up the big hill, and then I was with some of the strongest skiers in the world, so they stuck right with me. It didn’t work quite so well as it normally does… I couldn’t quite sprint as hard as I wanted.”

Dunklee caught 10th place, but wasn’t able to hang on. She ended up 12th, and was slightly disappointed she couldn’t do better.

“I’ve had some of my best results of the season this past week,” she said. “But it’s definitely not as high as it could have been. I realized that I seriously was in contention a few of those races, and that’s a cool thing to know. I can be up there. I’m a little disappointed that I didn’t do that, but all in all, it’s one of my best weeks of my winter so far and of my life ski racing.”

Yet the result was still remarkable – the best individual result for a U.S. woman ever at the Olympics. Dunklee had tied Joan Smith’s previous best of 14th in the sprint race last weekend, but now she holds the honor all to herself.

“The level today is unbelievably high with the women’s field,” said Bernd Eisenbichler, the High Performance Director for U.S. Biathlon. “She really was strong on the skis, there was just some better performances overall with the shooting. Tenth place for her
combined with the 14th and the 18th [in the pursuit] is a really good achievement. It would not take much to take the next steps.”