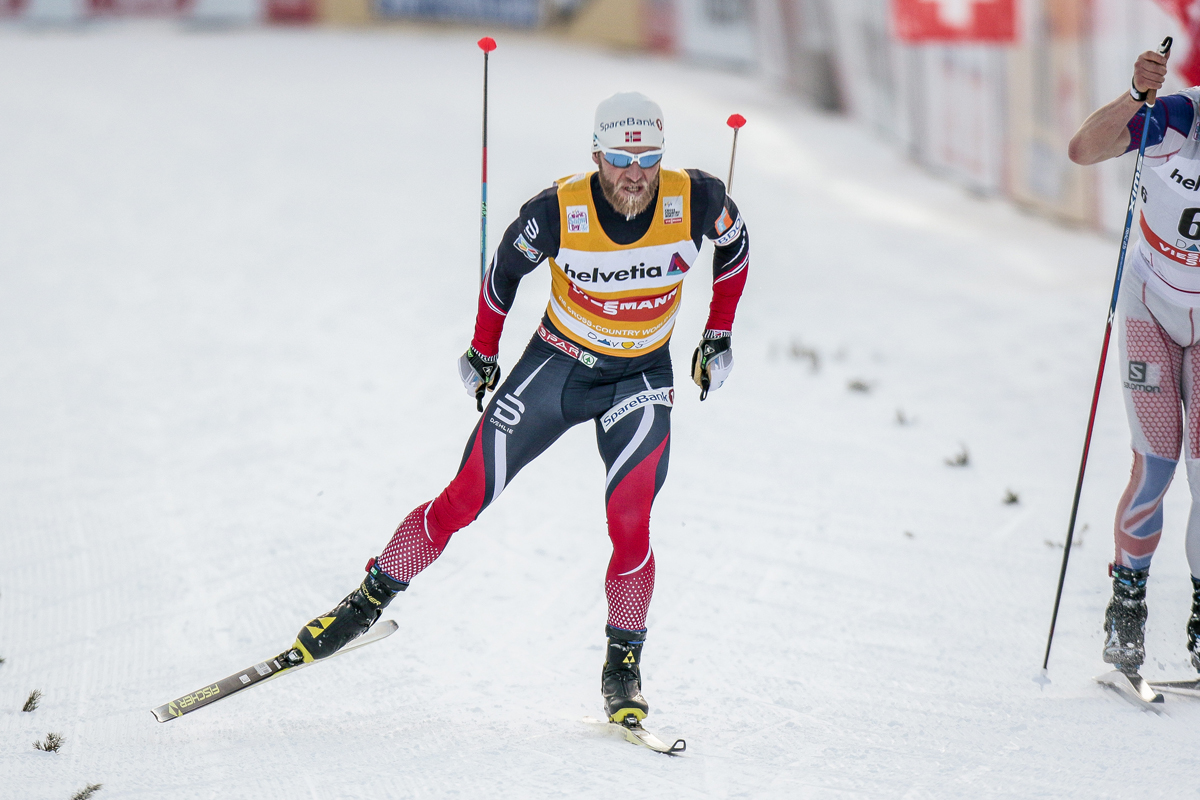 Martin Johnsrud Sundby of Norway coming into the finish for a win in the 30 k skate in Davos, Switzerland. (Photo: Fischer/NordicFocus)

Norway’s Martin Johnsrud Sundby took a win in the 30 k freestyle in Davos, Switzerland, this weekend, but on Sunday a new team had took a trip to the podium’s top step: Russia, whose Sergey Ustiugov notched his first victory of the season in the skate sprint.

Here’s all the reporting – and there’s a lot – that didn’t make it into the race reports.

On that awesome feeling in your legs

On how to get through a rough patch

“Alex [Harvey] came through with a group, with a young Swede, Jens Burman. He was going quite strong– I think he finished top ten today [note: Burman was sixth]. I joined that train and just kind of faked it through the top of the lap to try to get into the draft there and was able to recover a bit and stay with him though my last lap. It was a perfect group for me to finish with and it helped me have a good last lap there.”

“The hardest part for me was the second lap. I had to go a few laps where I tried to just calm down and get rid of some lactate… when [Maurice] Manificat began to get tired, I wasn’t feeling great at the time so I didn’t want to go in front. I think that’s where I lost some seconds… All in all, that Martin wins today is like it should be, because I had so much help.”

On avoiding our interview in the mixed zone

On 21-year-old Lucas Chanavat of France, top qualifier and sixth in the sprint

“If you qualify first you know that your are feeling good that day. You have that confidence. You know that you have really good skis with you. So it is cool to see that, stepping up and taking advantage of the opportunity of being here. He skied hell of a qualifier and a hell of, a hell of quarterfinal so that’s cool to see. It’s sweet to see guys like that.”

On sprinting at altitude

“I think [the qualifier] went well. I didn’t feel the greatest before my heat. The qualifier took a lot out of my lungs, same with Simi [Hamilton], like our lungs are wrecked warming up. The legs were a bit heavy, but I guess it is the same for everybody.”

“Two years ago I did that, coming wide off the last turn and was about to pass two guys. But they were still a bit ahead of me so they took the left lanes and then you’re screwed. Today I was close beside them, so they couldn’t really cut me off completely. This time it worked, last time it didn’t.”

“Today, I just wanted to do the sprint and remember how to sprint with a tired body with the Tour de Ski coming. It wasn’t very good, but I wasn’t expecting a whole lot. I just wanted to focus on doing the best I could with what I had.”

“There was definitely headwind coming down valley. So my kind of main strategy was to just get in a nice draft through the long gradual flats here. I felt great for a lap and you know still felt good coming through on my second lap.”

On the first period of racing

“To be honest, I wasn’t all that confident today. I’ve raced in Davos about five or six times, and I’ve gone really slow every time, so today is by far the best I’ve ever done. I’m fairly pleased. My main focus is the 30 k skiathalon at the World Championships, and then I’m hoping to go fast at the Tour de Ski as well. Those are the two things I’m aiming most for. So I’d like to have won a race, but it’s the best, most stable start I’ve had to a season so far in my career, so it gives me a little bit of confidence going forward. At the same time it’s a long season, so there’s plenty of time to start going slow.”

“Overall kind of a disappointing weekend here in Davos, but that’s okay. Overall it’s an okay start to the season. Nothing outstanding, but I feel like I’m building well towards the Tour.”

“We will just have four guys for the relay, so I am psyched to take a turn in that. I think it bodes well for me that they changed the distance race to a 15 k skate on a short kind of circuit loop. Psyched to jump into that hopefully too. And see what happens. I think right now it’s like, the more I can just get my body used to the hard efforts the better. So regardless of how I feel next weekend, it will be a good opportunity to get in a couple more hard efforts before a good solid training block over Christmas.”

“I’m really excited to do the relay. It think Killick showed he’s obviously in great form, so I think we could have some fun in the relay. And 15 k skate mass start is fun if you can stay with the group. And that’s the goal.”

“I feel good, but I’m nervous for the relay event. I don’t know where I am going to start either. It will be fun– I know the shape is good, I just guess it’s been a lot of racing. I have done all the distance except the 30 k. So I am going to try to get my speed back and I think it will go well.”

The post Davos Notes and Quotes: The Men appeared first on FasterSkier.com.