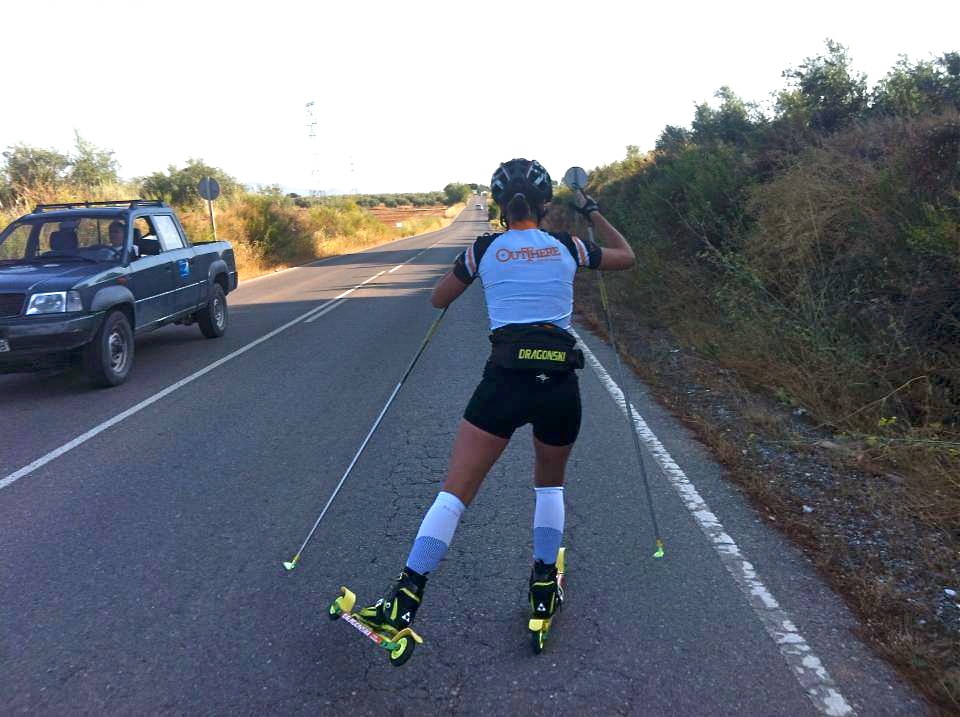 Victoria Padial Hernandez rollerskis in her native Spain while wearing there Out There training kit. Padial was the first member of the Out There Biathlon and Nordic Team, and in 2014 won silver in both the sprint and the pursuit at Open European Championships, becoming the first Spanish athlete to ever medal at the event. The Team now has seven members and aims to support its athletes through a family-like environment. (Photo: Out There/Facebook)

At first glance these countries have very little in common when it comes to skiing. In fact, it’s rare to hear of high performing World Cup athletes from many of these nations, let alone a team that boasts members from all eight of these counties.

Despite the lack of apparent ties, one small-town ski shop in Wisconsin is joining forces with nordic athletes from each country in order to help grow the sport and in the process they’re building a family.

It all started roughly seven years ago when Kristen and Bjørn Hanson were attempting to bring a ski shop to Rice Lake, a small town in northern Wisconsin with less than 9,000 residents.

Bjørn, who is the U.S. board member for the World Loppet Skiers Association, knew there was a demand in the community but everyone he approached dismissed the idea, saying that nearby Hayward would be a more suitable location. 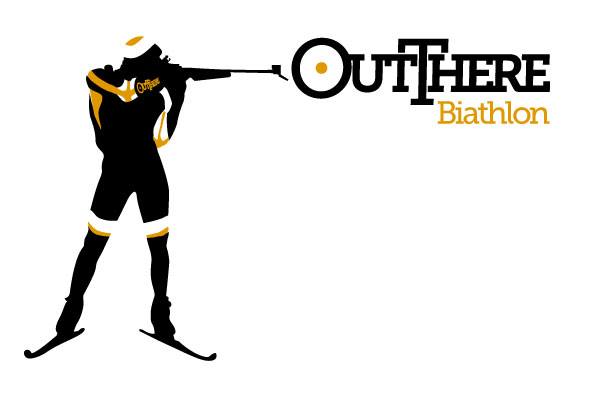 One of the logos for the Out There Biathlon and Nordic Team. in the 2014/2015 season the team boasts eight athletes from eight different countries. (Photo: Out There/Facebook)

It wasn’t until their long-time friend and Fischer/Swix representative for the Midwest, John Theis, suggested that Hanson open the shop himself that the Rice Lake shop came into fruition.

The move made sense. Hanson had a long history with cross country skiing. He was an avid cross country skier and had a strong Norwegian heritage with many family members still in the Scandinavian country.

“It wasn’t an option,” said Hanson about his introduction to skiing in a phone interview. “You were born and then you had skis slapped on your feet a couple years later. The rest was history.”

Not only did a background in cross country skiing qualify the Wisconsinite to open a ski shop, he also had extensive experience in retail.  To this day, Hanson runs a paint and decorating business in Rice Lake that is the anchor store of the town’s main street. Situated in a 1904 Victorian, the family business has been a facet of the town for 38 years.

Hanson and his wife realized that with such a large facility, there was room for more than just paint. After rearranging the store, the couple utilized two rooms in the house in what would be called Out There.

Today, Out There has become a fully outfitted ski shop and has grown from two rooms to encompass the entire basement, four rooms on the main floor, and a strength facility in the warehouse behind the shop.

That’s not the only way Out There has grown. After the Hansons’ son became interested in Biathlon, Hanson turned to a graphic designer to create a biathlon logo for the store. The task was only a whim at the time, but when Hanson realized the O in Out could be used as a biathlon target, he became excited about the possibilities. 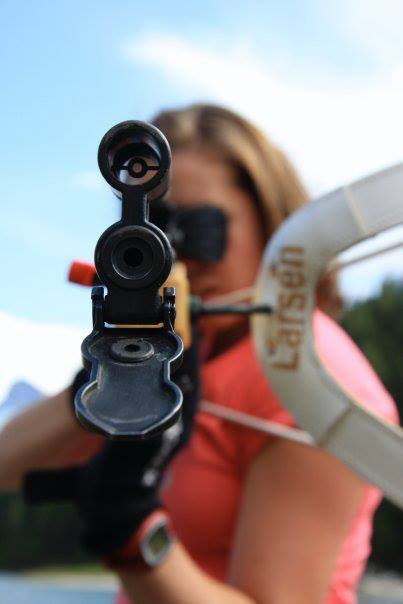 Out There athlete, Sarah Murphy of New Zealand, practicing her shot in 2013. (Photo: Out There/Facebook)

Soon after the creation of the new logo, Hanson was contacted by a British representative who said he had a Spanish biathlete, Victoria Hernandez, who was interested in expanding her image. Open to the idea of partnering with an athlete or two, Hanson and Hernandez discussed how the shop could best support an athlete from a non-traditional nordic nation.

The shop agreed to sponsor Hernandez, and as word spread of how Out There was supporting those on the fringe of nordic sports, more and more athletes got in touch with the store.

“There’s been this snowball effect and we are continuing to grow,” Hanson said of the Out There Biathlon and Nordic Team. “We are getting emails about once a month from either an athlete or coach who is asking about us. We take each situation and see if it is a good fit for what we are doing.”

Represented by the biathlon logo that was originally created on a whim, the Out There Biathlon and Nordic Team has grown to a fully fledged team. In the 2014/2015 season Out There will be sponsoring eight athletes from eight nations, all of whom are biathletes and one who is also a cross country ski racer.

Out There makes an attractive sponsor for several reasons that have very little to do with financial gain.

Bjørn and Kristin work with each athlete individually to tailor a sponsorship that fits their needs. That could mean financial support, subsidized gear, or getting them in contact with other potential sponsors.

“We’re this extended family that is championing what they want to do. We try not to do it from a business standpoint, but from a family standpoint.”

For biathlete Katrina Howe, Out There’s first American athlete, the Hansons have crafted a unique plan in which the skier sells homemade knit hats and earrings through the shop and it’s website. Out There has also helped her set up her own Facebook page to promote the hats, which she calls Foxy Toppers.

Out There collects no income from any of her products, and sends her the full profits via PayPal once a sale is made.

“Some people would mark it up and try to make a cut on it, but we’re just trying to promote it and make more money for the athletes,“ Hanson said.

Out There also attempts to ensure its athletes have a plan for the future, whether or not that includes skiing.

“Some day you have so become a person. Maybe that’s is coaching, or a wax tech, or selling who knows what,” Hanson said. “That is something that you have to think about as you progress in your professional athletic life. I think a lot of athletes haven’t thought about that so we’re trying to assist them by laying the foundation for them to get into the things that can allow them to help build the sport in ten years. “

At the end of the day, Out There is all about growing nordic skiing by creating a strong support system for fringe athletes.

“The more we grow the sport the more potential business there is for everyone. If we don’t grow the sport it is too small,” explained Hanson. “When you look at the globe and realize that the client base comes from north of the 45th parallel, you realize you don’t have billions of potential customers.”

Perhaps the most important aspect of an Out There sponsorship is its inclusion into a tight-knit community. In order to ensure the sport continues to grow, Out There aims to build a family environment for its racers that can support them regardless of whether they are from Hungary or Brazil.

“We’re this extended family that is championing what they want to do,” Hanson said. “We try not to do it from a business standpoint, but from a family standpoint.” 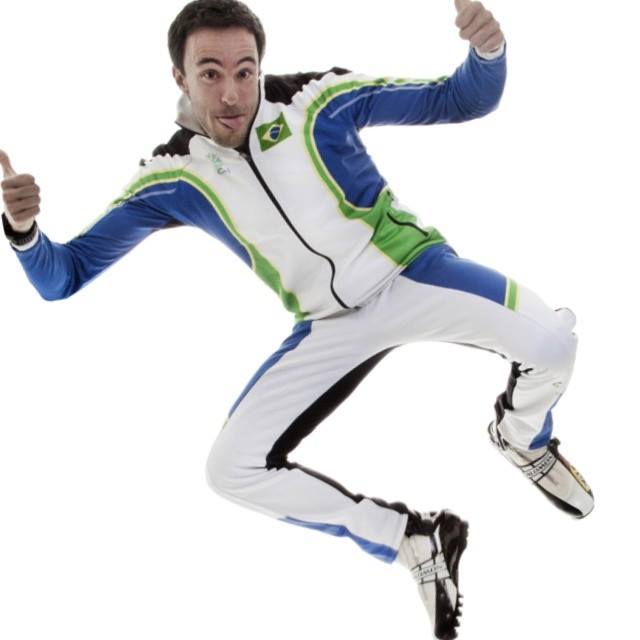 Leandro Lutz is a member of the Out There Biathlon and Nordic Team. A native of Brazil, Lutz often jokes that there aren’t many people rollerskiing in his country. Lutz will travel to the U.S. in July to train with Out There before he heads to Europe in the fall in the hopes of attending the 2015 World Championships in Falun, Sweden. (Photo: Out There/Facebook)

This family orientation means that the Hansons will regularly host athletes in their home. Last year Sarah Murphy, a biathlete from New Zealand, spent several weeks with them while she was racing in the 2014 Berkie. Another athlete, Leandro Lutz, will travel from his native Brazil to Rice Lake in July so that he can train in Wisconsin with Out There before he heads to Europe in the fall. This year he hopes to qualify for the 2015 World Championships in Falun, Sweden.

Hanson also described some other nontraditional support that the team gives its athletes. He said that he’s received many emails asking advice for personal issues. Recently an Out There teammate asked for guidance regarding his girlfriend. Hanson was more than happy to help.

Hanson explained that many people are initially perplexed by Out There’s model, but that eventually the team’s intimate nature makes sense.

When Out There first started its relationship with Murphy, one of the team’s first athletes, the New Zealand biathlete was very skeptical of the program.

“When she first contacted us she said she was very leery but thought that she would extend a hand and contact us,” said Hanson. “The first couple times we talked she thought it was too bizarre. Why would someone want to do this when there is no initial financial gain or little face-to-face contact? Then she realized that we were trying to do this in order to grow the sport.”

When asked about the future of the Out There team, Hanson said that he and his wife don’t have any concrete plans.

“I don’t like to set too many plans because you miss opportunities because you are settling with one plan,” he said.

The Hansons plan to talk with their athletes and see what they think is best for the direction of the Out There shop and team. Regardless of future expansion or developments, the small Wisconsin shop will continue to support its team in an manner that helps grow the sport of skiing.

Highlighted by a joke from Murphy, Hanson sums up his shop and its future direction in one sentence.