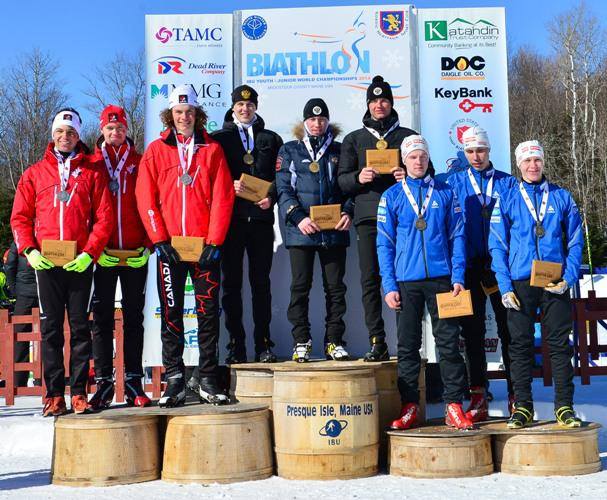 The Canadian biathlon team has turned in impressive results at the highest level over the past years, but as several top athletes wind down their careers, questions about the future of the program arise.

Alex Dupuis, Aidan Millar and Jules Burnotte may not have answered those queries definitively, but they certainly gave a resounding reason to be optimistic.

The trio teamed up to win silver in the youth relay at the biathlon World Youth/Junior Championships in Presque Isle, Maine, edging out Finland by just 3.7 seconds.

After a week of strong results, with all three men posting individual top-10 results, Canadian coach Roddy Ward was not surprised to see his squad on the podium.

“Last night we told the Youth Men that they would not need to do anything special – just have 3 solid legs. 3 normal performances and they would have a good result. Using some spares would be fine but they needed to be sure they are in control in the range to avoid the penalty loop,” Ward wrote to FasterSkier in an email.”

The Canadians did just that, finishing the day as the only team to ski just a single penalty lap. Russia, who ran away with the win by over two minutes, used one less spare round — nine to Canada’s ten — but finished with two penalties.

Dupuis started strong, needing just one spare in prime and two in standing to tag off in second, 28.7 seconds down on Yaroslav Kostyukov of Russia.

“Alex started off really strong, skiing near the front and just a normal routine in the range. He is a fighter by nature and created the momentum for the team,” Ward wrote of his scramble skier. 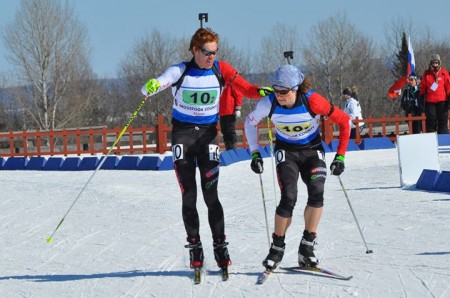 Millar took over, shooting identically to his teammate, and keeping the Canadians in the medal hunt. He dropped to third, behind the U.S.

“Aidan’s job was to run his own race, pace it smart and take his time on the range to ensure he avoided the penalty loop. Aidan had a great leg,” Ward explained.

“I just wanted to ski my own race race and not worry about positions or anything,” Millar wrote in an email to FasterSkier. “The shooting went well and I was able to focus on my shooting and execute properly. My skiing felt fast and I just left everything on the course.

Olympian Sean Doherty moved the Americans from 6th, +1:09 up to second with a blistering second leg. Doherty used a single spare in both prone and standing while taking nearly third seconds out of the next fastest racer, Poland’s Mateusz Janik.

It was not meant to be the American’s day however. Brian Halligan ended up with two penalties in prone, and another in standing, to drop the team back to 5th, where they would ultimately finish.

Canada, on the other hand, moved in the other direction. The towering 6’5″ Burnotte earned a penalty in prone, but kept his composure, and bested Finland in a sprint to the line.

“We figured Jules to be the guy to battle in the last standing, that is why he was chosen for the final leg,” Ward wrote. “He has a carefree personality and we thought that would serve him well under stress. We also knew Jules had great speed for that final loop and at 6’5″ had the pure speed if it came down to a sprint. The race ended up playing out as expected, Jules kept his composure perfectly and won a sprint to the finish against Finland.”

Millar wrote that he didn’t know exactly how to describe the feeling of winning a medal, saying, “it was more then happiness and excitement. It’s unbelievable.” 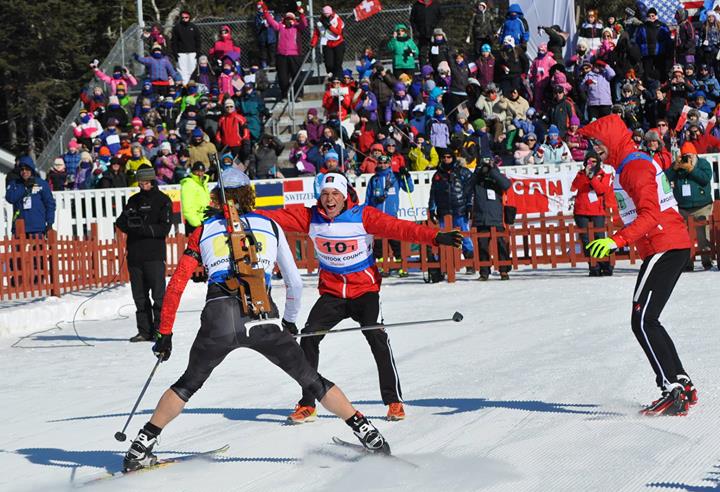 The Canadians celebrate as Brunotte crosses the line for silver. Photo: Biathlon Canada.

Ward witnessed a distinct difference between the winning Russians and the Canadians. The victors, he wrote, looked “relived and happy” in the finish area. “Our guys looked like they just won the lottery when they crossed the finish line!”

He explained that the teams came in different expectations and that he doesn’t think he has ever seen athletes as excited as his team.

“The whole finish, medal ceremony and press conference was pretty fun to watch, they were just buzzing with excitement!” Ward wrote.

“This season has been fun with great results at all levels (Olympics, WC, IBU Cup and WJYCH). We have some serious momentum going so we need to plan smart and empower all our programs across the country to keep this momentum moving forward,” Ward concluded. “This week has shown that we have good depth in our ranks, which bodes well for the future of course.”