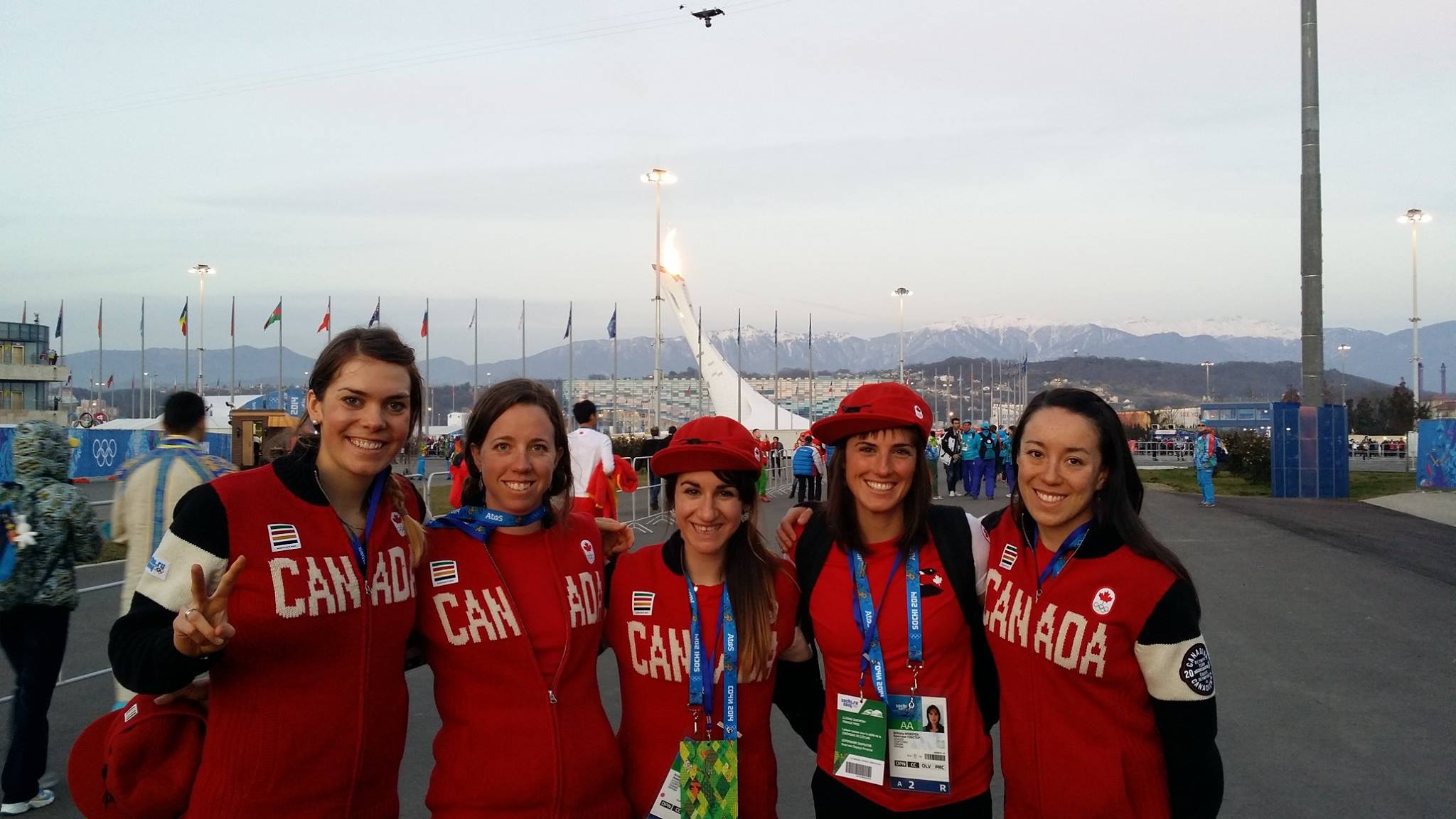 KRASNAYA POLYANA, Russia — One by one, the four Canadian women in the 30-kilometer freestyle mass start last Saturday, their final race of the Olympics, walked away from the finish line and into the media corrals, assembling as a unit to be interviewed.

Without watching the race, one might’ve guessed they missed the relay; that’s how much of a team these women appeared to be.

Two were teammates on the Alberta World Cup Academy and Canadian Senior Development Team: Emily Nishikawa and Heidi Widmer, both in their first Olympics.

The other two were independent racers, Amanda Ammar, 28, of Team Ninja, and Brittany Webster, 26, of Team Mito.

All had finished within seven places of one another in the 30 k finale, with Webster notching the top result of 46th and Widmer, the youngest on the team at 22, placing 52nd. (On Friday, Widmer turned 23.)

Without the team’s three World Cup sprinters in Perianne Jones, Dasha Gaiazova and Chandra Crawford in the race, the group provided a glimpse of the future of Canadian women’s skiing.

Each had taken different roads to get there — Nishikawa and Widmer more traditionally through the Olympic Team Trials in January, and Ammar and Webster through an appeals process soon after the trials. The latter two, both former national-team members, were in their second Olympics since semi-retiring from the sport a few years ago. Ammar cited injuries and burnout; Webster had gone to the 2010 Vancouver Games but did not compete, then in 2011, decided her slip in results stemmed from a lack of enjoying the sport.

Come the next Winter Olympics, here they were, with two newcomers in Nishikawa, 24, and Widmer as teammates. 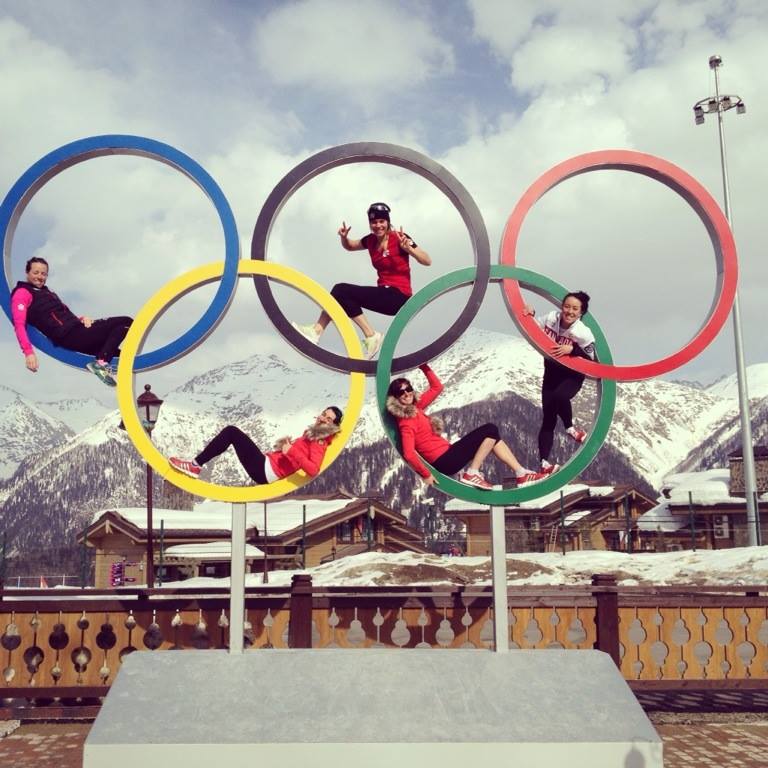 Together, the team had its best results of 11th in the classic team sprint with Jones and Gaiazova, 14th in the 4 x 5 k relay with Jones, Gaiazova, Nishikawa, and Webster, and a top individual result of Jones’ 23rd in the freestyle sprint, just ahead of Gaiazova in 25th.

The 30 k wasn’t a personal best for any of the Canadians, but it was a capstone in their respective careers.

Aside from her result of 49th, Ammar called it her most memorable part of the Sochi Games.

“I’m so proud of these girls — I mean 30 k is so hard,” she said, fighting tears while looking at her teammates. “I know we were all a little terrified, maybe, excited, but anyone who does this race is a hero in my eyes.”

Of her teammates, Ammar said she started the fastest and paid the price. Webster and Nishikawa passed her, and like Widmer, Ammar said that gave her motivation to push harder.

“A 30 k is just an abundance of walls and when you’re going to hit it you never know,” she said.

Webster said it was funny because the ended up within places of one another, but didn’t ski together. Only Ammar changed her skis, which she called “a mistake.”

“They got slower, but so did everyone else’s, I felt like,” Webster said.

Widmer was hoping the competitor she was skiing with would go in for a fresh pair.

“I was secretly like, ‘Please change, please change. OK, we’re not changing, we’re gonna do it,’” she recalled. “But my skis were fast, so I was like ‘If they change, I’ll change,’ but mine were faster so I was like … ‘Maybe I’ll just go chill.’ ”

Widmer went on to beat Croatia’s Vedrana Malec by nearly two seconds in what she called a “slow-motion sprint” to the finish. She had been skiing with Kazakhstan’s Tatyana Ossipova in front of her and Malec behind her for most of the race.

“The last 5 k, the Kazakh broke me and the [Croatian] chick passed me on the last uphill, and then I passed her back,” Widmer said. “I was like, ‘I will stay in front of her if it’s the last thing I do,’ so that was the sole victory.”

The four women laughed together, snapped a group photo and hung out under the sunny and warm skies. They were in no rush, despite being indescribably tired.

After finishing 33 seconds behind Webster in 47th, Nishikawa reflected on her first Olympics.

“From the start of my first race, the pursuit was an incredible feeling — ‘Oh my God, I’m an Olympian!’ ” Nishikawa said. “It was just really cool to realize, ‘Oh, I’m here,’ and I had a great race that day. I’ve had an incredible time here, so I’m incredibly fortunate and just feel incredibly grateful that I had the opportunity to get three Olympic races in.”

“The two words that stick out right now are how proud I am and how inspired I am that you get to represent your country and then you get to race against the best in the world,” Widmer said. “That has inspired you to be that much better, come back stronger.”

Webster praised her teammates after spending three weeks with them at a hotel in the valley town of Rosa Khutor. “It’s been nice to become close to everyone and feel like … for the first time in my entire ski career, I feel we have a great team,” she said. “I’ve never really felt that before.”

After the Games, some team members, like Gaiazova, went home.

According to Cross Country Canada, Widmer will join other NorAm leaders, including Andrea Dupont and Alysson Marshall, in the March World Cups, which start this weekend in Lahti, Finland. Jones is the lone woman on the Canadian World Cup team who will be racing there, and Cendrine Browne was also called up for the races based on her results at U23 World Championships.

While Gaiazova could not be reached for comment, she tweeted on Feb. 23, the day after the 30 k: “Really sad to be going home instead of the World Cup races in Scando. Such is life… @cccski good luck to those racing!!!”

Head coach Justin Wadsworth said Gaiazova wanted to leave after she was done racing at the Olympics.

“We did tell her that she’s not welcome on the rest of the World Cup,” he said. “She broke all our team policies and code of conduct.”

After Gaiazova placed 44th in the 10 k classic, her second of four races at the Olympics, Wadsworth said she had “been out partying” the night before.

“We had talked about it at our Olympic briefing, that there’s no partying at the Olympic Games [before your races are over],” Wadsworth said, adding that Cross Country Canada had the paperwork to back that contract up. “She’s appealing it.”

On Feb. 17, Crawford tweeted that she was on her way back to Canmore.

Since the beginning of the season, there have been indications that this would likely be the last Olympics for Jones, Gaiazova, and Crawford, although when each plans to retire has not been publicly laid out.

“I will definitely race ’til 2015 at World Champs in Falun,” Crawford told FasterSkier more than a year ago. “It’s just set in my mind as a for sure, but I’ll probably reevaluate after the Olympics the feasibility of another quadrennial.”

“When I ski race, I put my 100-percent effort into it, and as long as I’m able to do that and as long as there’s desire and determination I think I would be thrilled and honored to continue,” she said around the same time. “And if my priorities shift and something else comes up or for whatever reason I’m not able to perform at 100 percent then, you know, you sort of reevaluate and see if you want to commit to more.”