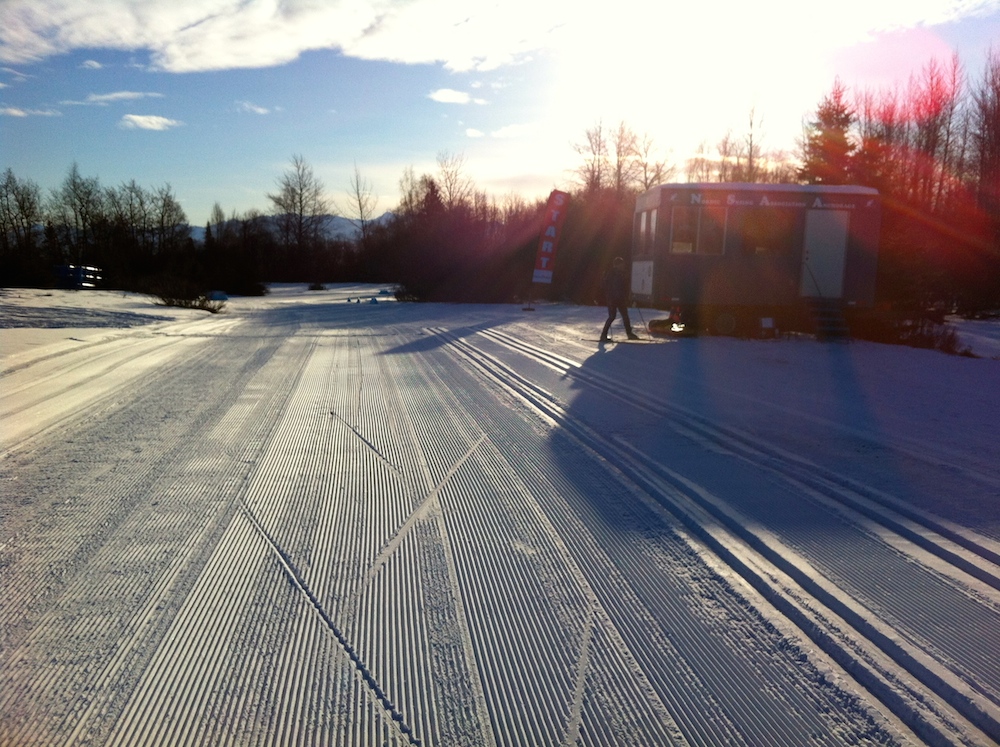 The secondary stadium at World Cup start, 0.8 miles from the Kincaid Chalet and main open-aired stadium at Kincaid Park in Anchorage, Alaska, on Friday morning. While the primary stadium has a thin base of snow cover, it’s exposed.

Editor’s Note: Normally, FasterSkier will be doing the reporting and the Anchorage Daily News (ADN) will help with photos from this year’s SuperTour Finals and U.S. Distance Nationals, but on the eve of the first of four races, we’ll let the ADN do the talking in the form of this preview, which ran both in print and online.

Like her U.S. Ski Team teammates, Anchorage’s Holly Brooks spent this winter living out of duffel bags, grinding out World Cup nordic races all over Europe and Olympic races in Sochi, rarely staying in one location for long.

That schedule proved exhausting, and Brooks is finally back home in Airport Heights after four months away.

But she can’t hit full relax-mode yet, not with the season’s final four races, replete with the strongest fields in North America this season, scheduled here beginning Saturday, when the 2014 U.S. National Championships and the SuperTour Finals open at Kincaid Park. 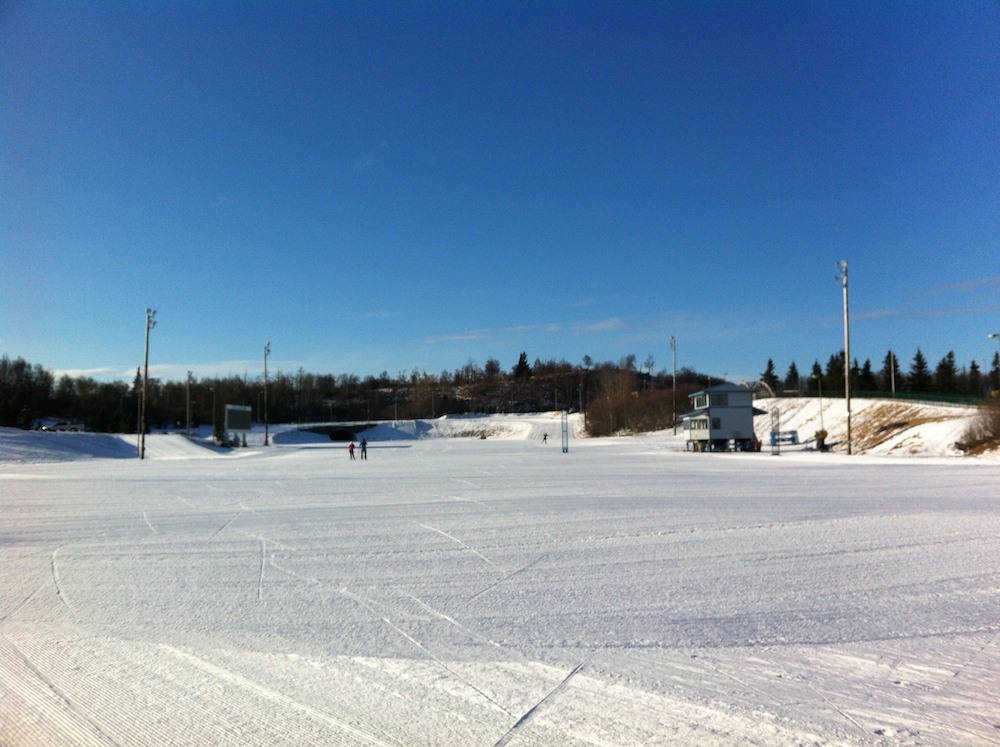 The main stadium at Kincaid Park, which will not be used this week for SuperTour Finals and U.S. Distance Nationals because of Anchorage’s low-snow situation. The trails are covered, and race organizers have yet to determine whether all the races will be held at Kincaid — including the 30 and 50 k next Friday. Races are planned for Kincaid unless otherwise noted.

Anchorage Olympians Brooks, Kikkan Randall, Sophie Bjornsen and Erik Bjornsen, who all compete for the APU Nordic Center, are part of the stacked fields registered. By Brooks’ count, 12 of the 14 U.S. Olympians from Sochi will be skiing. And SuperTour points leaders Reese Hanneman of APU and Caitlin Gregg of Minneapolis are also registered.

“It’s the highest level that’s taking place in North America this year,” said two-time Olympian James Southam, the race director. “It’s the only time all season the best athletes in the country are in one place, and in the U.S.

“For Anchorage to be holding these races, I think, is a super-cool opportunity for people to get out and see what the best in the world look like.”

“This is our only chance to ski domestically all season,” she said. “It’s also kind of a reunion of sorts, to catch up with old friends, teammates, old coaches. Most people will plan to ski all the races. It’s the end of the season — there’s nothing to save for, nothing to hold back.”

Randall, the four-time Olympian who recently wrapped up her third consecutive World Cup sprint title, said she also intends to race every event. She appreciates that the country’s top skiers, almost to a person, have traveled here to end the season with loaded fields.

“Everybody’s doing a good job the last few years of respecting the final races, to race domestically and to compete for your club,” Randall said.

Randall said she’s excited for the upcoming races, in part because they will mark the first time she has competed in her hometown since the 2010 U.S. Olympic Trials.

Southam said he was psyched nearly all the top racers have come here at season’s end.

“At this time of year, you don’t always see the best ones because they’re super-tired,” Southam said. “But for the best to come here is great. The last few years, Anchorage has put itself on the map, especially with the APU program. People are like, ‘What’s going on there?’ What’s in the water?’ ”

The races are all scheduled to take place on the world-class trails at Kincaid Park. That could change if conditions or temperatures change significantly. The trails at APU and Hillside give organizers alternatives.

The SuperTour and national championship races lure top racers to compete against the best of the best in the hunt for titles. Prize money is another incentive. All together, about $ 10,000 in prize money will be awarded

Find Doyle Woody’s blog at adn.com/hockeyblog, email him at [email protected] or call him at 257-4335.

All events at Kincaid Park (subject to change)