HAYWARD, Wis. — This past weekend, nearly the entirety of the adult population of Midwestern skiers made their way to Hayward for the annual get-together of the ski community: The Birkie. The American Birkebeiner (or Birkie, for short), is the biggest ski race in North America. For many skiers, the race represents their culmination of training for the whole year. 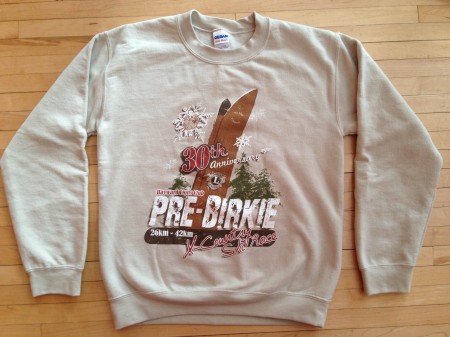 The commemorative sweatshirt for the Pre-Birkie, circa 2012.

Accordingly, the level of excitement and attention towards this race is high enough that there is actually a term for it — Birkie Fever.  There is even a fairly large race dedicated to preparation for the Birkie itself, logically named the Pre-Birkie, which races on the Birkie trails two weeks prior to the big race.

Growing up in the Midwest, I had been fully aware of the Fever, but as a junior and collegiate skier, this time of year was often filled by preparation for Junior Nationals or other races. This year, I finally decided to make the trek to Hayward from Canmore, Alberta (my current residence), for my first-ever Birkie. My plan was to meet up with my family and my friend Julie, who lives on the East Coast.

T-minus 6 weeks: I decide to start mixing some interval sessions into my usual workout schedule, which generally consists of easy skiing and lots of mixed and ice climbing. I also discover some amazingly colorful workout spandex online and have an in-depth discussion on race day wear with Julie on whether we should start our own team and wear said spandex.

T-minus 4 weeks: A last-minute three-week climbing trip is organized, and I leave for the climbing trip. The trip is fantastic, but with temperatures dropping to -20F, I sustain moderate frostbite in my feet.

T-minus 7 days: I start noticing in-depth wax discussions for the Birkie popping up on major ski shop websites based on the 10-day forecasts. Info emails from the Birkie, which had previously been arriving several times a month in my inbox, start arriving every other day. I also learn that there are no less than three songs that have been written about the Birkie (available for listening here).

T-minus 4 to 5 days: Comments start popping up on Facebook about the Birkie. Focus is centered on the weather forecast, which has changed significantly. A mega-snowstorm predicted to arrive Thursday afternoon is dubbed “Birknado” and spawns the hashtag #BirkiePanic. 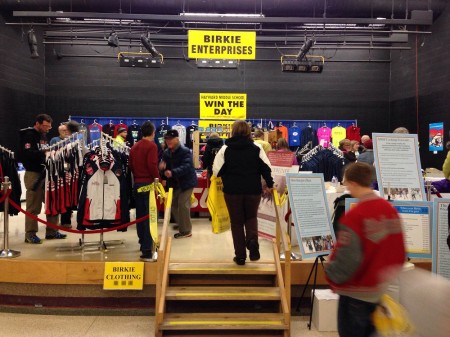 T-minus 2 days: I travel to Minneapolis, arriving just before all of the flights are canceled coming into town, due to the mega-snowstorm that’s about to hit. Julie’s flights are all canceled, and now she’s not scheduled to arrive until late Friday night. My dad and I travel to Hayward. Bib pickup is the most elaborate set up I’ve ever seen. I have to show photo ID twice. Wandering around the vendor booths afterward, we notice the Birkie memorabilia stand, where one can choose from hundreds of items with which to display one’s Birkie pride.

T-minus 1 day: I head back into Hayward, armed with a hat, a Buff, and a photo of a photo ID of Julie. The goal is to pick up Julie’s bib via impersonation, and it is a stunning success at first. At the second ID check, however, I’m asked what my birthday is, and in a worst-friend-ever maneuver, I totally blank. I tell my story to the bib lady, and she lets me take the bib anyway.

I am also informed by a seasoned Birkie skier that the road “00,” which marks the rough midway point of the race, is actually pronounced “double-oh,” and not “double-zero,” as I had been calling it. This is a serious faux-pas. #BirkieFail.

Race Day: After at least five Birkie emails in the past 24 hours, we arrive at the Birkie start. There has been so much snow that the start area warm-up tent is partially collapsed, but the bitter cold has driven many people inside the tent anyway.  It’s 1F at 8 a.m., and there’s a strong headwind. There’s a helicopter shooting video circling above us.  The cost basis of helicopter filming is absurdly high, so I know that this is serious business.

I move into the start area and file into my wave zone. I’m lucky enough to be in Wave 1, but I notice that as the start countdown for the wave ahead of us (Classic Wave 2) begins, all of the people around me start to shift into a crouching position. Confused at first, I realize that they are setting up to run to the start line once our wave moves up.  Classic Wave 2 goes off, and my wave starts a full-on sprint to the start line. Realizing that this is how stampedes begin, I, too, break into a sprint and score a great starting spot. 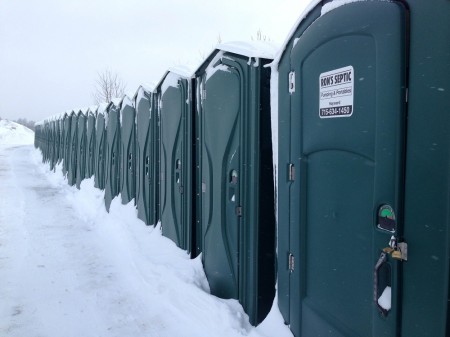 Lots of restrooms at the Birkie start.

The start itself is pretty standard, but I’m impressed to see bins of poles on the side of the trail after the chaos has settled out. Replacement poles, sorted by length, are available to all. I later find out that this is standard at the aid stations, as well.

As my wave settles in a rhythm, all goes smoothly. There is great cheering from supporters on the sides of the trail, and there are sometimes massive slowdowns on the uphills as skiers bog up in the very soft, very cold snow, but otherwise, the race is fairly normal.

At 00, I end up dropping out due to cold feet (a carryover from the cold injuries sustained on the climbing trip), but Julie, also in her first Birkie, finishes the race. She is stoked about the shot-ski at the top of Bitch Hill and, like the Dartmouth alum that she is, fully indulges. Later on, she is not so stoked about the ski across the lake to the finish (due to the headwind, not the shot), but finishes strong. 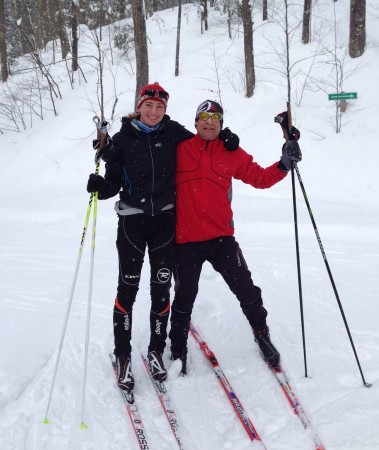 The author and her dad out for a ski before the Birkie.

I hitch a ride to the finish area. I find my clothes bag in the meticulously organized and enormous bag area just as Julie finishes the race. She’s tired, but mostly extremely impressed at how nice Midwestern skiers are. The streets are packed with people. Everyone is exhausted, but the sun is just warm enough to make the cold manageable. There is serious revelry going on, and even though I’m a little disappointed about my race, the atmosphere is so fun that it more than makes up for it.

Overall, the Birkie was a great experience. It’s pretty amazing to see how many people are excited enough about skiing to want to ski a hard, cold, 50 k skate race hours away from any population center. I was stoked to finally experience “The Fever,” and I will definitely be back next year.