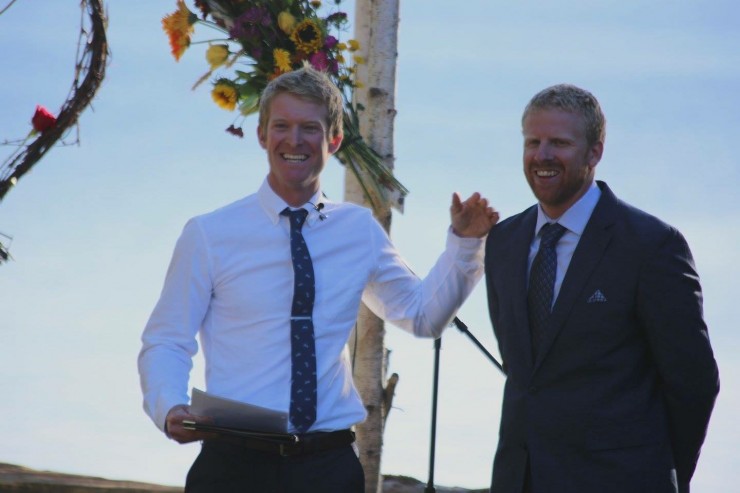 Colin Rodgers (left) as the MC for Chris Mallory’s (right) wedding, September, 2015. The two coaches and former nordic ski racers were grew up about 15 miles away from each other in Vermont. (Courtesy photo)

Their cars won’t literally pass on the interstate, but the image is worth rendering. Colin Rodgers, five years the head of the Sun Valley Ski Education Foundation (SVSEF) Gold Team, is heading back to his native Vermont to become nordic director for the Green Mountain Valley School (GMVS) in Waitsfield, Vt. (Rodgers is currently in Italy with GMVS leading a training camp.)

Heading the opposite direction from Vermont to Sun Valley, Idaho, where he recently resigned as assistant coach at University of Vermont (UVM) after three years, is Chris Mallory — also a native Vermonter.

It’s safe to say that Rodgers’s and Mallory’s lives are seperated by far less than six-degrees: the world of elite ski coaching is small and close knit. That their paths have crossed on their career transects isn’t odd at all when you consider something Rick Kapala, SVSEF’s longtime nordic director, said in a recent phone interview.

“You know, somebody was asking me is it really hard to lose a guy like Colin,” Kapala reflected. “And of course the answer is yes … but all of our programs, whether you talk to APU [Alaska Pacific University], or whatever, it is part of the game that you if you have really good coaches, you are going to lose really good coaches because they are going to have opportunities to move to another level.” 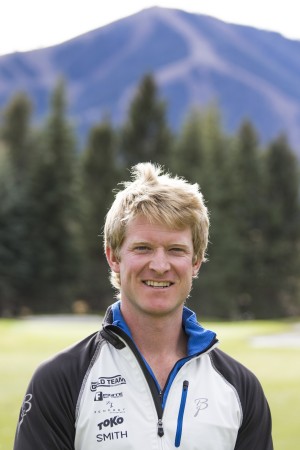 After captaining the Middlebury College Ski Team and graduating in 2004, Rodgers lived the professional skier’s life. He skied for the Gold Team from 2006 to 2011. Since that time, the Westford, Vt., native has been the lead waxer, travel agent, coach, and all-around, go-to leader of the Gold Team.

According to Kapala, the first word that came to mind when asked about the indelible fingerprint Rodgers left on the Gold Program was: “professionalism”.

“We have always prided ourselves as trying to run a really pro program,” Kapala said. “But Colin as an athlete, really, I feel gave everything he possibly had to his racing career and the same thing was true as a coach. He demanded a lot of himself in that role, held himself to a really high standard, … worked as hard as he could, cared so deeply about the program and the athletes and the process of getting to the highest levels. I really think that all the athletes that we had engaged in our program benefitted from the approach Colin had, which was leave no stone unturned … look for every advantage, bring your best every day, and I look at it and go, we were very fortunate to have him.”

Rodgers, 35, takes over a transitioning GMVS program. Last October, longtime GMVS Nordic Director Justin Beckwith stepped down. 2010 Olympian Garrott Kuzzy took over with help from newly hired nordic coach Katrina Howe. Now, nearly a year later, Rodgers will take over a program with 13 athletes — comprised of nine men and four women. Howe will remain as a nordic coach. (According to Rodgers, Kuzzy will be pursuing an MBA in Innsbruck, Austria, this year. Kuzzy could not be reached for comment by press time.)

Junior skiers are not elite senior skiers. Yet Rodgers mentioned that his core mission remains the same: building bonds.

“Of course, I will need to make some adjustments to my approach to the younger athletes, but it is all truly about sharing my passion for the sport of cross country skiing,” Rodgers explained. “The age of the athlete is not so important, but rather that you share a common interest with the individual and you can pass along a bit of knowledge that will help them improve. Then you are making a difference. It is still all about building relationships and doing your best to support the team.”

For Rodgers, directing a program is the biggest new opportunity beyond moving back to his home state. “Running a program in my home state seemed like a fun challenge that I was up for,” he said.

Back in Vermont, a state with a rich and proud nordic tradition, Rodgers commented that one of his biggest hurdles at GMVS, a private high school, will be making the sport he loves more accessible.

“The biggest challenge will be in trying to help kids join the program that may not have the financial means to do so,” he said. “Ideally, we want athletes at the school that have the drive to ski fast and work hard. Hopefully, those two un-biased character traits will allow any motivated student/athlete the ability ski for our program.” 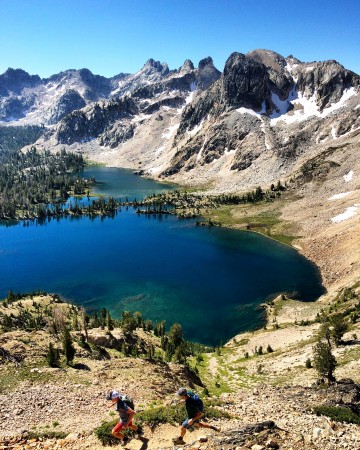 For SVSEF’s Gold Team, the benchmark for participation isn’t overtly financial, it’s performance based. Be a motivated, willing-to-develop, fast skier and you might make the cut. And for the coach, there’s no study hall to schedule and monitor, less shuttling skiers back and forth.

“One of the most important things [with this level of senior coaching] is you need to have somebody who has both the depth of experience but also the ability to really keep the ship level,” Kapala said from Sun Valley. “The senior athletes that we have that work with the Gold Team are all highly motivated, so it’s a little bit different than junior coaching. For the junior coaching, I have a lot of kids that are very, very early on in their ski racing career. So you do a lot of really base-level educating and motivating. … The problem with these Gold Team-type positions, whether you are talking our program, Stratton or APU or what not, you sort of have to be able to do everything.”

After skiing at the University of New Hampshire, Mallory headed west to Sun Valley where he began coaching in 2006. That SVSEF stint, where he began as a development-team coach and progressed to head post-graduate coach, lasted eight years. In May 2013, he took the assistant coach position at UVM. He also served as a wax-tech on three separate Junior World Championships trips.

According to Kapala, Mallory can do a bit of everything, making him a good fit for the Gold Team. The bonus: Mallory has a positive history with the local community. Although deciding to leave a program like UVM for the Gold Team was difficult according to Mallory. “It was a tough decision to leave UVM. There is a big incoming freshmen class this year with some good young energy and it’s hard to leave the athletes on the team who you’ve created relationships with after a few seasons, but these opportunities only come around so often.”

Like Rodgers, Mallory enters his new position with some challenges. For the 34-year-old Mallory, his is entering a training season already in full swing. 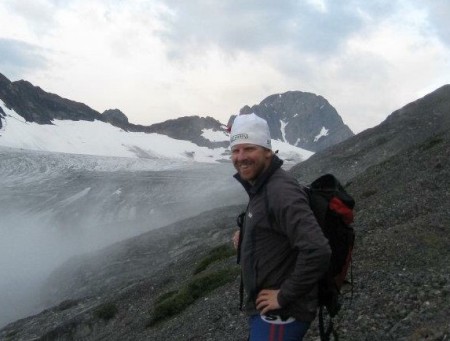 “At this point I’m coming in halfway through the training season, so there is going to be a transition for myself and the team,” Mallory, a Colchester, Vt., native, explained in an email while packing for his move West. “It’s going to be important to establish good working relationships with each of the athletes, so they can reach their highest potential. Luckily I’ve worked with half the team in the past, so I look forward to building on those relationships and taking the time to create a strong team dynamic.”

For both Rodgers and Mallory their shared history with SVSEF may pay dividends for the broader U.S. cross-country culture.

“Their will be a time when I’m not the program director here [at SVSEF], and I hope that what happens is the day after I leave, the program is moving just right ahead. Seamless. No hiccups at all,” Kapala reflected as he spoke about coaching changes and building programmatic legacies. “And that will be the sign that you’ve been able to develop a program which isn’t about a personality or one individual it’s about the strength of the program as a whole.”

Rodgers and Mallory, who grew up about 15 miles away from each other, are on their way.